The snakebite is back and it has grown up

It’s a Thursday night, half past eight, and I’ve just arrived at Brauhaus, a tiny beer pub in Tollcross, Edinburgh. I’ve been to Brauhaus before, last summer, for a night of fruit-flavoured beers and something supposedly flavoured with chocolate. Tonight, I’m here to drink a snakebite. It’s been a while. 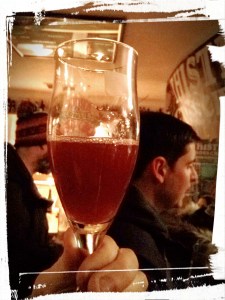 Fruity, refreshing and very adult: a snakebite. Gavin Meiklejohn, owner of Tempest Brew Co, can be seen to the right of the glass.

The snakebite doesn’t have  a good reputation. I know it from my student days as a  50/50 mixture of lager and cider, brought together in a pint glass and enjoyed for its reputedly inebriating qualities rather than taste. Back in the day, people who were faint of heart, or goths, would add a dash of blackcurrant to improve the flavour and colour. I know the pink snakebite as a pink panther. C. tells me it was known as a diesel in Fife. To quote a Swedish saying: a popular child has many names.

Back to Brauhaus. As  I made my way to the bar, I noticed that the people around me held frothing glasses of a dark pink liquid. This snakebite is the result of a collaboration between two Scottish companies and clearly contains blackcurrant.

I spoke to Gavin Meiklejohn, owner of Tempest Brew Co, who told me that the Snakebite is a collaboration between his company and Thistly Cross Cider, owned by Peter Stuart. Tempest sends their beer to Thistly Cross where it is blended with equal amounts of cider and a helping of blackcurrant juice from the Thistly Cross farm. When beer, cider and juice has married, the ‘flat snakebite’ is returned to Tempest, where the is lightly carbonated before being kegged.

At Brauhaus, the resulting liquid is poured into a half pint for me. It is a deep, murky pink, with a light, white head. Light filters through it, suggesting a better, rose-tinted world at the bottom of the glass. The flavour is fruity and fresh, with a light, refreshing hoppiness. It’s not too sweet, not too bitter, and at 5.5%ABV, definitely adult.

It’s a wonderful drink and I had a several ideas for it. I think it would make a lovely sorbet, a fine mulled cider and a rather wicked jelly. Of course, it is best as a drink, cool and refreshing in the warm months, or suggestive of summer in winter.

Last updated by Caroline von Schmalensee at May 21, 2013.