The Vegan Society recently congratulated a number of Scottish SMPs for issuing a motion to support the Society’s Vegan for the World campaign. Part of the campaign is a challenge for all of us to go vegan for a week for the environment. I’m not vegan but most of what I eat and cook is. I’ve learned to reach for new ingredients to adapt some of my favourite recipes. Like my signature onion flan. 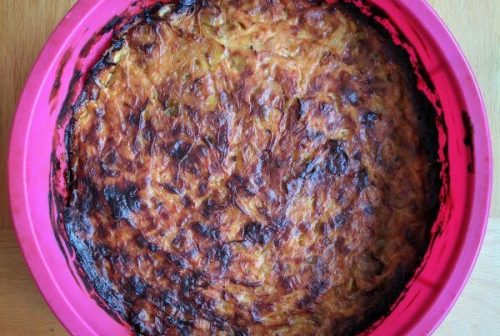 It looks a little scorched but those dark bits just add extra caramelisation. No, honestly.

When I was a teenager I developed an onion and leek flan loosely based on a quiche recipe. It involved 3 large leeks and several onions – finely sliced and softened in butter, three eggs, 200 ml milk and a couple of hundred grams of grated mature cheese in a pastry case. It was deep and delicious and I have served it at all kinds of occasions, from picnics to dinner parties. For a long time, it was my signature dish.

Now I live with a dairy-intolerant vegetarian who also responds very badly to soft-set egg. My pride and joy onion flan would make him very uncomfortable indeed. I miss it’s onionness, however, the savoury umami flavours of caramelized onions, the golden, set top, the pure comfort that flan represented to me.

The other week I decided to make a vegan version using silken tofu. I’d never used tofu in this way before and was a little nervous that it wouldn’t actually set. But it did. I got a lovely soft set that didn’t rubber up when I forgot it in the oven for a few extra minutes, like egg can.

I took my new-style flan to a party and it went down well. A couple of days later I made another version, this time without pastry (hurra for silicon bakeware). I played with nutritional yeast and fermented tofu to get some of the umami notes that cheese brought to the original. I didn’t get the full cheese effect but they did add richness.

It’s a very different dish from the one I served when I was younger: it’s softer since there’s no cheese or egg, and it’s shallower but tastes great and is easy to make. I’ll continue making it for all kinds of occasions: the onion sings. 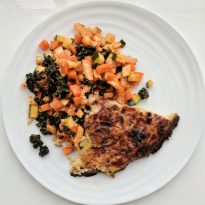 Save Print
Preparation time
20 mins
Cooking time
40 mins
Total time
1 hour
This easy onion flan can be made with or without pastry. The recipe is for the filling: if you want pastry, make and blind bake this separately. A Boston pastry (flour, oil and water) works well, especially if you use rye or buckwheat flour as well as wheat.
Author: Edinburgh Foody
Recipe type: Flan
Cuisine: Vegan
Serves: 4-8
Ingredients
Instructions
3.5.3208