Instant blinis: pancakes with a difference

Pancake day. When I was a kid, me and my friends would get together and do things with flour, eggs, milk and butter that were probably not healthy but very satisfying. There was usually honey, lingonberry, blueberry and cloud berry jam on the table too, occasionally Nutella, often whipped cream but never, ever lemon juice and sugar. I’m a fan of the British way of eating pancakes now, although it feels a little spartan, but the whipped cream and jam combo is still a firm favourite. It fills me with the comforts of childhood.

But that’s not the kind of pancake I’m writing about today. This is about adult pancakes, not confections of sugar and cream, but the most adult pancake out there, the blini. 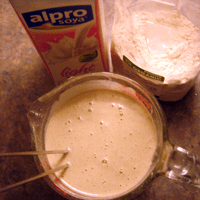 Traditionally, blinis are made with buckwheat flour and yeast. I keep the buckwheat flour but have dumped the yeast. My buckwheat pancakes have only four ingredients: buckwheat flour, soya milk, baking powder and salt. It’s the easiest thing ever. Mix it all together, leave it for half an hour or so and then fry. I always use a non-stick pan so I don’t really need to use fat. A teaspoon or so of oil in the batter makes sure that the pancakes release once they’ve set. A pinch of salt intensifies the flavour of the buckwheat and since this is an adult food stuff, we want the earthy buckwheat flavour.

Like the pancakes of my youth, it’s what you have with them, that makes blinis special. Soured cream, finely chopped white or red onion and lumpfish (or real) caviar is traditional, but you can have them with anything you like. Smoked or cured salmon works very well. Onion, finely chopped gherkins and soured cream works too. Hard-boiled egg, chopped finely and served with pickled herring – or dressed crab for a very different flavour – and a little bit of dill is delectable. Beetroot and goats cheese. Use your imagination.

Buckwheat contains quite a lot of protein in it, as does soya milk. The two together, gives a batter that holds together well and feels eggy even though it isn’t. This makes enough for two people having it as a main, or four having blinis as starters.

Blinis freeze well and they taste good cold as well as warm. I happily have leftover blinis with a smear of jam for breakfast. 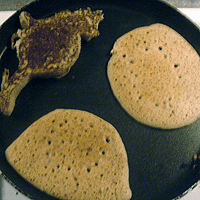 Yes. I tried to make a cat-shaped blini. It wasn’t

I sometimes divide the batter into two batches, one savoury (with salt and baking powder), one sweet (just milk and flour). The first half I have with all the joyous crispy, bitter, salty bits and pieces that go with a traditional blini. The second half, I have with jam. Ideally homemade cloud berry jam. (And yes, occasionally, a little bit of whipped cream. Yum!)

(I’ve used a version of this batter to make fritters. It really is versatile.)

Or do check out another pancake recipe of ours.

Instant blinis: pancakes with a difference 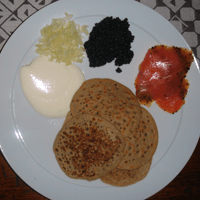