This is not the first time we’ve been to Hotel du Vin: we’ve enjoyed the chef’s table in the past as well as the Sunday brunch. Recently, we were invited again to try the new menu. This summer, Hotel du Vin is focussing on classic French cuisine. And what  a nice thing that is. 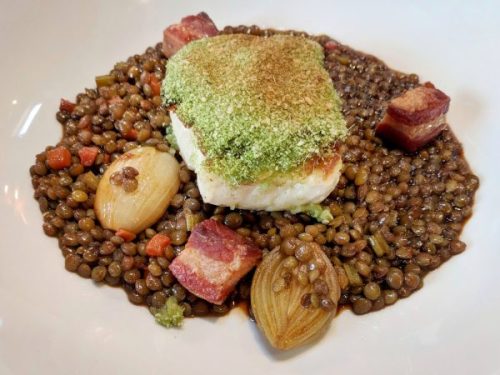 Immediately after ordering a gin and tonic I realised there were apértifs on the menu and that I could have started my meal with an Americano (the cocktail, not the coffee). The house gin is Caorunn so it was a pleasant start, regardless.

I enjoy French classics and was delighted to see dishes like steak tartare, onion soup, snails and paté. It will come as no surprise that I went straight for the steak tartare. It was perfect: a large silky yoke which melted into fresh hacked meat, mixed a lovely mix of mustard, cornichon and capers. It was utterly fabulous. (I want some right now.) 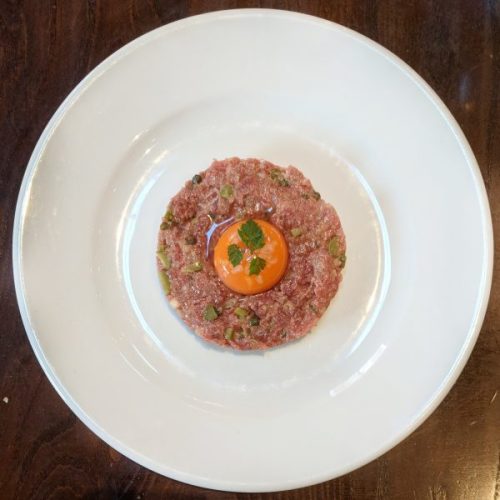 Christopher decided against the leeks vinaigrette and had sautéed mushrooms in a Madeira cream on brioche toast. Sweet and savoury in happy balance.

As well as a fixed price menu, there are quick-serve plates – moules! – and sandwiches for when you need to get a move on. Particularly useful for people staying in the hotel. We were in no hurry to run out and take in Edinburgh but looked at the other mains. Sole meuniere and moulse were both tempting, as was the cassoulet and the calves liver. Afte a lot of humming and hawing, I went for the roast cod on lentils because it was Thursday and in Italy, that’s lentil day. Also, I really like cod. And lentils.

The fish was perfectly flaky, the lentils still firm. They were savoury and flavourful, a deep rich sauce contrasting with the delicate savour of the fish and its herb crumb. Chunks of pancetta added saltiness. We had a side of haricots verts for greens.

Christopher had the roquefort, pear and walnut salad. It’s what he usually has at Hotel du Vin but then, they make it very well. I liked the sound of the aubergine and halloumi parmagiana bake too. 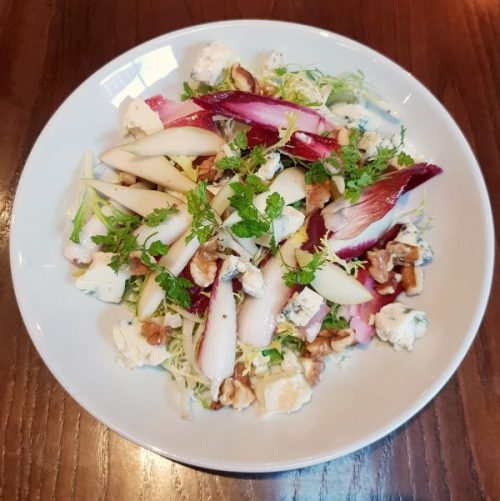 A lot of classic cuisine – French or otherwise – is usually based on fairly simple dishes. There’s an appealing elegance in simplicity. Every element has to be cooked to perfection and each ingredient treated with respect.

Come dessert, I was very full. But not too full to fit in a rhum baba, a yeasted cake soaked in rhum syrup and served with cream. I hadn’t had it before and, to be honest, I might not have it again. Not the chef’s fault. It wasn’t bad it just turns out baba isn’t my thing. The tarte au citron Christopher had was tart and wobbly to perfection. I bet the creme brulé would have been just as good, or the tarte tatin. 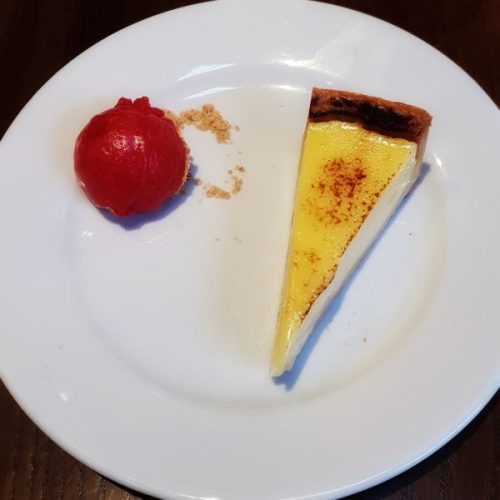 Tarte citron. Check out the wobbble on that! The raspberry sorbet was good too.

I really enjoyed this season’s menu. It’s classic, simple and has the types of dishes I enjoy eating. Hotel the Vin has a tempting, something for everyone menu served in their relaxed diningroom. After dinner, you can always relax in the whisky snug before daring the wilds of Edinburgh.

Last updated by Caroline von Schmalensee at May 18, 2018.