A couple of months ago, the Hotel du Vin chain launched Sunday brunch. Forget everything you know about brunch: Hotel du Vin’s offering is something else. We’re not talking a stack of American pancakes with syrup and blueberries, or even eggs Florentine. We’re talking four courses of fabulous food. At £19.95, it’s also fabulous value. 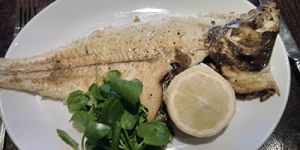 A whole plaice all to myself? I don’t mind if I do.

I was fortunate enough to be invited to the chef’s table one Sunday to take a spot of brunch with Michael Musgrave and Martin Barnovsky of Hotel du Vin, Edinburgh. It wasn’t just me: Katey from Edinburgh Eats and a friend were there too, and I had C. to escort me. The chef’s table is in a snug, just off the main dining room, and has a fish-bowl view of the kitchen. It’s an interesting view although I sometimes felt sorry for the chefs when we all turned to the window to gaze at what was happening in there.

Hotel du Vin’s brunch is a slow, leisurely affair, a relaxed afternoon of eating and chatting. The four courses are: 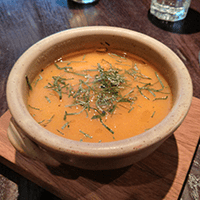 Vegetable soup gets your appetite going.

The soup is usually vegetarian and the one we had was seasonal vegetable and came sprinkled with parsley and olive oil. It was warming and fresh, and just whetted my appetite. In preparation for a big lunch I’d had an apple and a glass of grapefruit juice for breakfast. Come one o’clock I was ready to eat. I was hungry. The soup woke my taste buds gently and made my stomach rumble.

I’m surprised that we all managed to eat all four courses. C. probably had the smallest buffet place since he was bread and veg only, but the rest of us tried hard not to eat so much that we fainted. It took self-control. 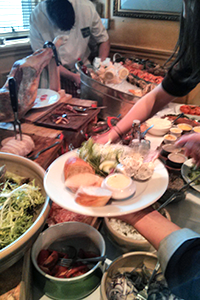 Action shot from the French Market buffet: oysters are being chucked in the background.

I’d cheerfully charge the entire cover price of £19.95 for the buffet. With a collection of breads, cold cuts and sea food, it’s the closest thing to a smörgåsbord I’ve seen outside of Sweden. What’s on it will vary with the seasons but we had prawns (shelled, and unshelled), oysters, dressed crab, cold and hot smoked salmon, potted shrimp, clams, mussels, salami, parma ham on the bone, mushroom paté, chicken liver paté, baguette, croisants, bagel, and all kinds of sauces and pickles. I’m probably selling the non-fish part of the spread a little short: I saw the crab and oysters and stampeded past the charcuterie.

You can visit the buffet more than once. We didn’t because we all figured that doing so would dampen our appetite for the main. 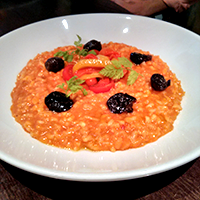 Choose from beef or chicken roast with all the trimmings, catch du jour, burger, omelette Arnold Bennet (smoked haddock and cheese), steak frites, tomato risotto and other filling, comforting dishes. At the table we also had the chicken roast, with puffy yorkies and roast veg, and the burger. It was cooked to perfection and oozing with cheese. It came with a poke of frites and looked absolutely lovely.

I think my catch du jour – a plaice, entire, gently fried and served with watercress and lemon – was probably the lightest option. It was delicious. A squeeze of lemon, a scrape with a knife, and it was perfect. I had some of the broccoli that came with the roast as a token green, but the plaice didn’t need anything but was great as it was.

C. had the tomato and olive risotto which hearty and full of tomato goodness. 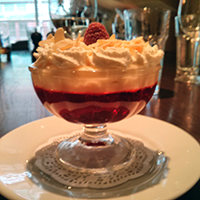 Look at the light sparkling in that jelly!

The deserts are classics: trifle, créme brulé, rhubarb crumble and cheese board are all on offer, as well as crumble, profiteroles and an ice cream coupe. Despite being in my twenties the first time I met a trifle, I enjoy the nostalgia of this particularly British dish. The Hotel du Vin version comes with crystal clear red jelly with a distinct sherry hit to it hiding under layers of cream and custard. It was big and I’m very proud of myself for finishing all of it.