Bagri, Sofia: a Taste of Bulgaria

With no particular reason to visit Bulgaria, Dad and I found snowy Sofia made for a charming weekend break. Even right in the city centre, it’s rich in history. Dotted amongst the post-Soviet apartment blocks, you’ll find Roman ruins in your local subway station, or a tiny medieval church below a roundabout. We ate surprisingly well on our three day trip, too – I’d done my homework and it paid off. 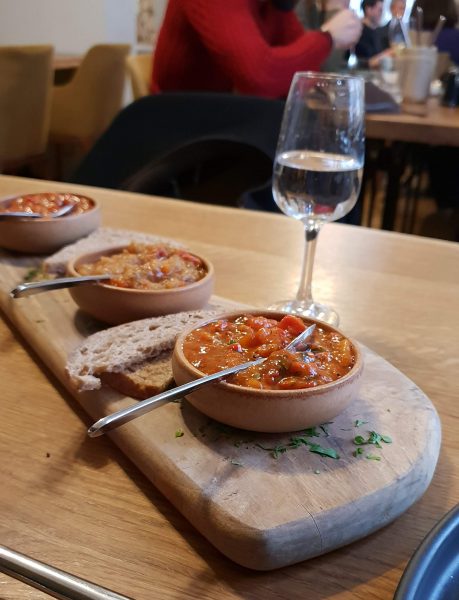 Rainbow Factory’s fried dough pancake was a breakfast hit. The chicken pate with Armagnac at Made in Home was Dad’s high point. The huge portions at inappropriately named The Little Things were certainly memorable, especially the bizarre combination of fries with bacon and cucumber. But undeniably our best dining experience was Bagri. In fact, it was so good we ate there twice.

A welcoming U-shaped restaurant with comfortable seating, wood furnishings and warm lighting, it had a cheerful buzz from friends catching up over great food. The hospitable servers were great at explaining about Bulgarian beer, wine and liquor, too. (All of which we sampled.) Given that I’d only earmarked it because the food looked great on Google search, Bagri was a real coup. Part of the Slow Food network, this family-run establishment doesn’t just specialise in seasonal, local produce, it’s dedicated to it, with some ingredients coming from their own farm. 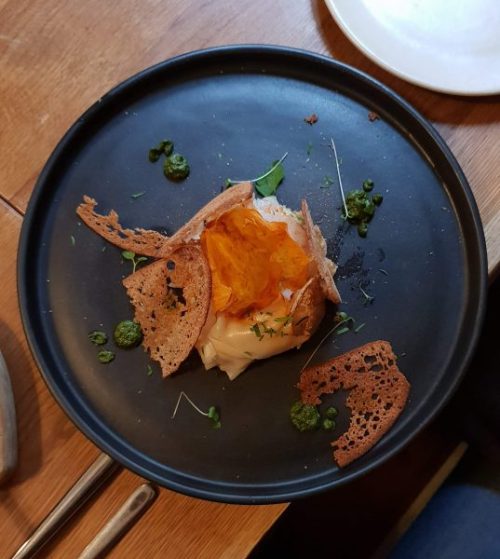 Fatback and croutons, as it were

On our first visit, a late lunch after a morning of churches, crypts, mosques and monuments, Dad and I shared three dishes and dessert. The first, described as ‘fatback,’ was a pile of very thin slices of cured lard. A touch of paprika at its edges, each piece melted in savoury, creamy delight. The accompanying sweet potato crisps and thin crouton shards provided a crunchy contrast.

The second dish was a selection of traditional Bulgarian dips, almost indistinguishable but nonetheless delectable. Consisting of stewed red peppers, onions and tomatoes, one was fiery, another smokey and the last was much sweeter. All were terrific slathered over real bread, of which we demanded more, more, more. 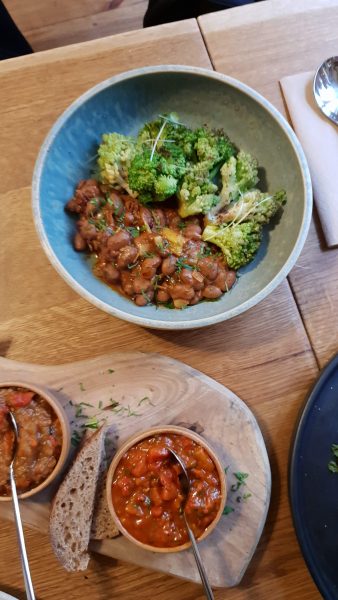 The final dish that day was a variety of Bulgarian beans with broccoli and romanesco. The simple, unadulterated greens were unbelievably good paired with the rich, almost meaty beans. About the size of a butter bean and reminiscent of a kidney bean, these moreish native pulses gave way with the gentlest bite. 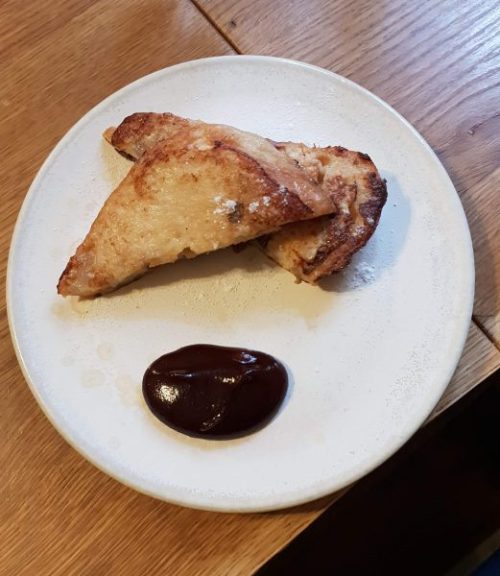 French toast with a rosehip compote, simple and satisfying, finished things up. We washed all of it down with an Bulgarian IPA from my new favourite brewery, Blek Pine. We also ordered rakia, a traditional fruit brandy. A small one was quite enough: supposedly cherry flavoured, it had the potency of paint stripper. 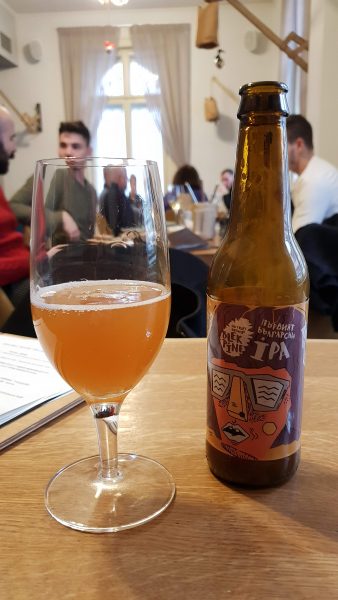 On our return visit, the weekend menu was slightly different but we followed the same format. We began with colourful potato salad, made with different potato varieties and homemade mayonnaise. Walnuts and pieces of mild cured blue fish, like softer, semi-raw herring, provided a pickled, salted, crumbly counterpoint to the smooth mouthfeel of the potato mix. Less remarkable than other dishes, it was still very tasty. 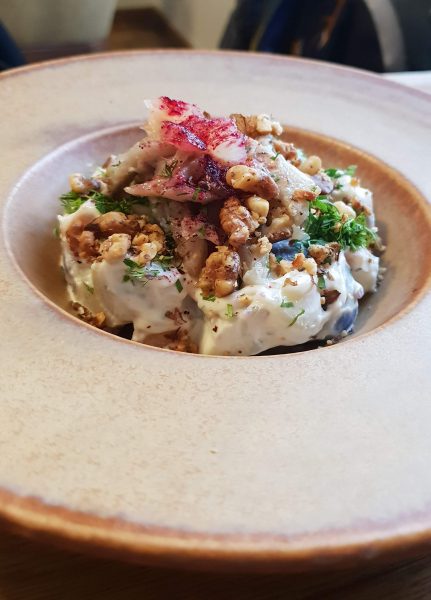 Our chicken wings and broccoli certainly were remarkable though, and those wings will stand out in my mind for many years to come. I really believe you can taste the difference in free range, organic meat and here the chicken was firm but moist as it fell off the bone, with a clean, natural flavour. The real highlight though was the immensely satisfying crispy coating, very well seasoned and not too oily: the best chicken nugget you’ve ever had. 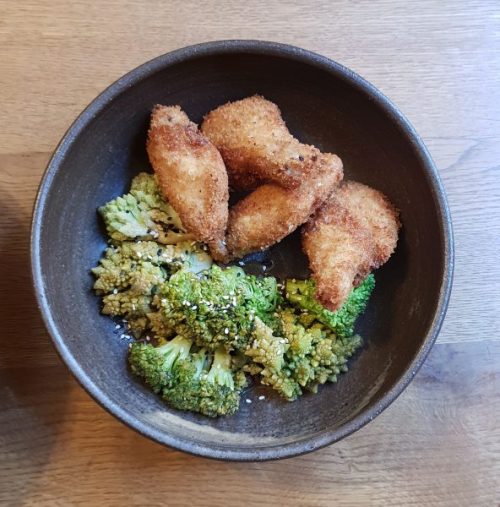 What was described as an avocado sandwich turned out to be the most deliciously velvety scrambled eggs. Combined with the eggs was the seemingly omnipresent sheep’s cheese, like a less salty feta. The eggs were presented on a slice of fresh sourdough fried in butter, topped with a few thin slices of avocado and toasted hazelnuts, which altogether was a stroke of genius. For a dish so basic, it was fantastically executed; your ideal brunch. 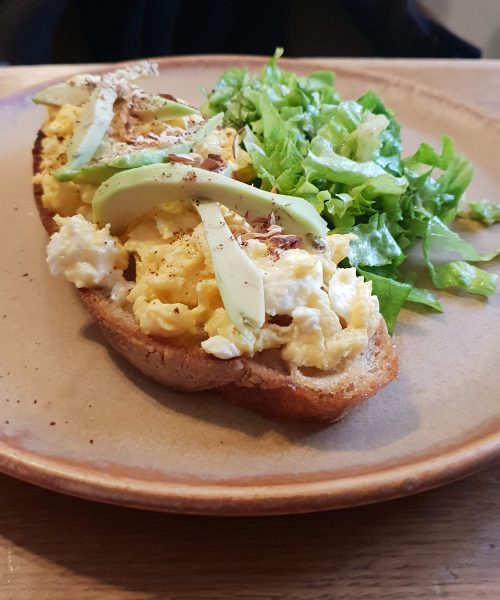 Spurred on by the endorphins of greed, we each had a chocolate mousse for dessert. Served with more rosehip compote, it was dark without being bitter, thick but gracefully aerated. The compote gave it a Black Forest Gateaux vibe and washed down with an espresso it was pure joy. Likewise, the white wine we had was excellent too. Produced with grapes grown in Bulgaria, it had a fruity tang bolstered by tannins. 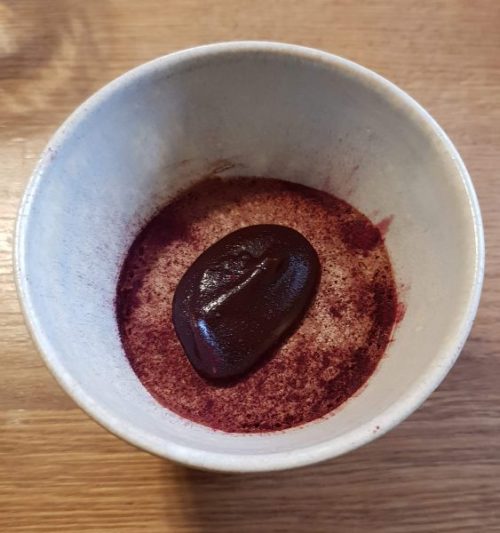 After our second sitting, we quietly digested for a while before rolling back onto the icy streets for a final mooch prior to the plane home. With direct flights under 4 hours from Edinburgh, I would recommend a trip to Sofia to those interested in Roman history, Medieval churches and former Soviet states. And even if that’s not your thing, you could certainly make a culinary trip of it too.