It was raining when we went down to Commercial Quay in Leith to try Fatma, a Lebanese restaurant. We were early, so walked around looking at the different restaurants, lined up like pearls in a necklace, but the unrelenting drizzle soon forced us inside. We were hungry and curious. It was my first time at a Lebanese restaurant and I was looking forward to it. Falafel as they should be: dark and crunch on the outside, fragrant and moist on the inside.

Fatma is a long, narrow restaurant with seating outside for leisurely dining on sunny evenings. Inside, white walls are decorated with pictures of film stars and scenes of the Middle East. We were the first guests of the evening but we were not on our own for long. From what we over heard, Fatma is popular with local diners. It’s also open for lunch.

We chose a table for two in a quiet corner and perused the menu. After talking to Samir, the owner, we decided to eat Lebanese style and share five mezze instead of having a three course meal. Sharing food is enjoyable and I think it promotes relaxed eating and talking. Sharing also means that you get to try more than one dish, a major bonus in my book. C. and I were impressed with the range of vegetarian mezze on offer. We took Samir’s advice and went for four veggie mezze, and one carnivore. Five mezze is plenty for two people. For four, Samir suggested six mezze and two mains to share. I love the idea that everything on the menu is open to sharing.

We started with flatbread and dips – garlic butter, yogurt and chili and carrot – and then the mezze arrived. 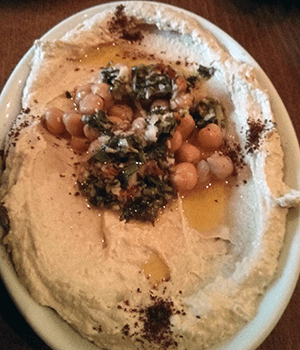 Homous Beiruty adds chickpeas for texture and chili for a bite of refreshing flavour.

Homous Beiruty was smooth and rich with tahini, and came garnished with chickpeas, oil and a wonderful chilli dressing. It was the perfect texture for picking up with warm flatbread. Good homous like this is sunshine on a plate. It is evokes thoughts of warm winds and hot sandstone, and takes the mind far away from Edinburgh’s drizzle.

Falafel has the same effect. I’ve been a fan of falafel ever since my first falafel wrap in San Fransisco over a decade ago. Since then, I’ve learned that there are many different sizes, flavours and textures of falafel and have become particularly fond of ones that are crunchy and dark on the outside but moist and pale inside. That’s how Fatma serves their falafel. They are satisfying mouthful.

Kibbeh are, traditionally, lamb and bulgurwheat croquettes stuffed with lamb mince. Fatma do a vegetarian version that comes garnished with a wonderful chili dressing. The kibbeh are finger-shaped and formed from bulgur wheat mixed with spices, chilli and tomato puré. Orange-pink in colour, they added colour to our selection. They had a crisp, refreshing tomato taste and delicate heat from the green chilli dressing.

The carnivore in me ordered chicken livers, maybe an unexpected choice from a cuisine that does great things with lamb. (I have my eye on lamb sausages and arayes – flatbread with minced lamb and parsley – for my next visit.) Sawdat djaj, pan fried chicken livers with onion and pomegranate sauce flambeéd in lemon and garlic, sounded too interesting not to try. The livers were cooked just right, tender and pink. The acidity from the lemon was a great counter-note to the rich livers in the sweet, almost smokey onion and pomegranate sauce. It was a good-sized portion and I had it all to myself. 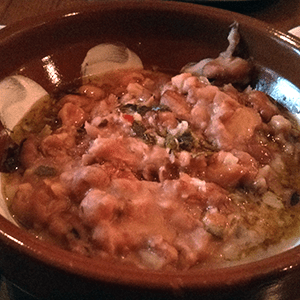 The modammas were possibly my favourite dish. Fava beans, slow-cooked and mashed with herbs, olive oil, garlic and lemon, they were surprisingly delicious and had a wonderful, creamy texture. They were good on flatbread and made a nice dip for falafel. I’d heard of fava beans before but haven’t had them, so when we got home, I did some research. It turns out that fava beans are broad beans. In the Middle East.  they are dried and then used like other pulses, often mixed with chickpeas. I thought I wasn’t a fan of broad beans but in this shape, I like them very much indeed.

We only tried five dishes, there are many more to taste. Among the mezze are wineleaves – hot and cold, labneh, lamb sausages, smoked aubergine dip, even chicken wings. Among the main dishes you’ll find interesting lamb and chicken stews, meat balls, kebabs and fish dishes. To finish, there’s Lebanese coffee and sweets. It’s a place to go with friends for a relaxed evening of catching up and sharing good food. The atmosphere is relaxed, the service is friendly and the food is robust, sunny and delicious. And filling. 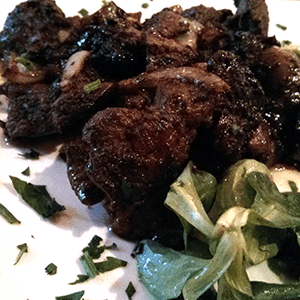