Fun with fruit and starch – returning to childhood favourites

I had a conversation with a friend of mine about coffee machines of yore. I told her that my favourite thing to get from the coffee machines where I worked between school and uni was fruit soup. Then I explained fruit soup. Then I asked how the apples got through the nozzle and possibly made my friend think I’m an idiot*. Then I decided to go home, look in my Swedish cookbook and make fruit soup. (I have a very exciting lifestyle.) 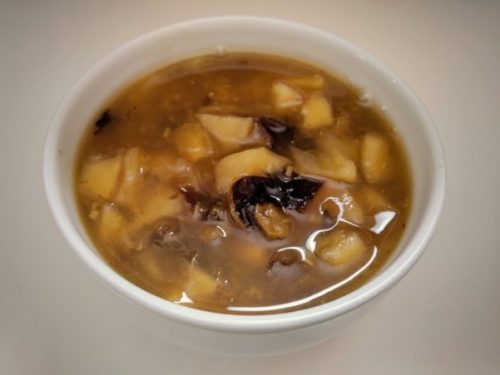 What is fruit soup?

Fruit soup, at least the stuff I grew up with, is made from mixed dried fruit – apples, apricots, pears and prunes – boiled in water with a little sugar and thickened with potato starch. In the UK, the starch of choice is corn starch. The two are more or less interchangeable except that corn starch is a little more sensitive to acid.  Fruit soup is usually served cold and when I grew up you could buy it in the chiller section in super markets, or as powder sachets.

I had a look through Leith’s Vegetarian Bible and my recent acquisition The Scottish Vegan Cookbook to see if there were similar recipes. Both have recipes for dried fruit compote and I plan to make the Jackie Jones version this weekend as a yogurt topper.

So, I got the ingredients, chopped the fruit roughly and set to. The home made version is lovely and reminded me a lot of what I had as a child but it has a more adult flavour thanks to lemon rind and cinnamon. If I make it again, I’ll use less sugar but on the whole, I loved this. It makes six small servings or four large ones. 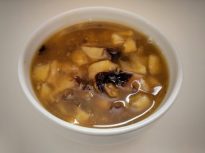 When I was browsing the starchy desserts section of my cookbook, I was reminded of things I use to eat as a child: packet chocolate ‘pudding’ (pudding in the American sense, a kind of mousse); kräm, a gloopy concoction of fresh fruit boiled with sugar and potato starch. I made them from packets but they’re really easy to make from scratch. I have plans to play with starch some more.

The next time I went to the super market I came across a packet of blancmange and had a look at the ingredients: starch and flavourings. Into the basket it went. I’ve never had blancmange and had assumed it was a gelatin-based sweet, not a starch one. 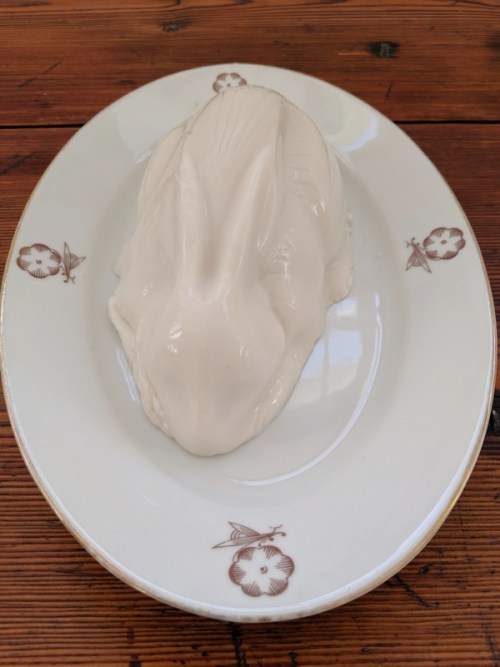 I whipped up a batch with cashew milk. The next morning, I had vanilla blancmange and chilled fruit soup for breakfast. It might not have been the healthiest breakfast I’ve ever had but it was very nice: cool vanilla creaminess and rich, fruity lumpiness. OK, so it sounds terrible but it made me happy. Blancmange reminds me of panna cotta. And I love how it wobbles.

* They don’t. The soup mixture is in the cup in the machine, the only thing added is water. Obviously.