Learn how to make bread in Edinburgh: Breadwinner

If you live or indeed have visited Edinburgh, chances are you’ll have eaten bread or cakes from Breadwinner without realising it – they supply more than 100 cafes and restaurants throughout the city! I am so heartened that so many establishments from burger bars to tea emporiums seek out the tasty, additive free bread and cakes!

Breadwinner is something of an Edinburgh institution – it’s been in business for more than 30 years (not for nothing is its Twitter handle @breadwinner1973). And after 40 years, the bakery has moved premises to grow the business.

I had the privilege of spending the afternoon with Sean McVey, owner and master baker extra ordinaire for the first of a new batch of bakery classes. I learnt so much and had such fun, I can highly recommend it! The classes are personal, hands on and give you lots of confidence to bake yourself. As you can imagine Sean’s a busy man, so there will be a limited number of classes in the coming months – excellent value at £90.

Sean is very big on taste, and a sour dough starter is the key to a tasty dough.  It takes a minimum of 3 days to get one going, so after learning how to make the starter, we use one he’d prepared earlier with a little fresh yeast.

It’s really important to get the flour, water, starter and yeast all about the same temperature before you begin. 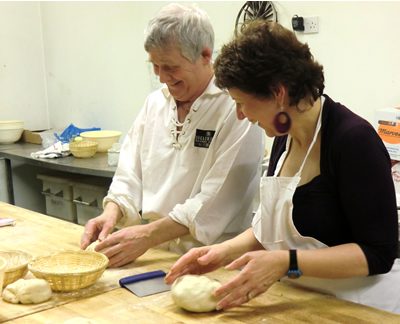 In no time at all, we mix the ingredients to make the loaves and rolls and leave the mixture to rise. Time to go onto something I never thought I would achieve, strudel dough! It’s similar to bread dough with an egg added.

Sean instructs me how to knead the dough – actually its more of a stretching pulling the dough outwards then folding back in (the same technique for the bread as the strudel dough).

You have to be brave when rolling out the strudel dough and not to worry too much if holes appear. You then pick it up and stretch it further! 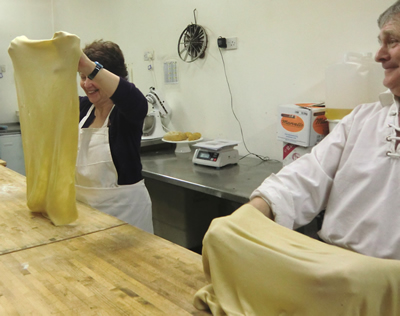 You then paint lashings of butter onto the dough and pile cooking apples, raisins soaked in rum and cinnamon on. Deftly using a tea towel you then roll the strudel up by pulling the tea towel towards you. Sean then places them in a long baguette tray and they’re ready for the oven. Obviously at home you’d need to do a bit of curling to get it into a domestic oven.

Back to the bread which is kneaded again. We then add a goats cheese into the centre of the loaf and draw the sides over to hide it inside. Its dusted with semolina and put into a wicker basket for its final proving. I am instructed how to make the rolls round by cupping my hand and manipulating them quite firmly. Just before baking, we slash the tops of the bread and use an apple corer to make indentations on the rolls – and voilà – ready for the oven.

Steam will help your bread rise, simply add some ice cubes to the floor of the cooker

The bread and strudel are cooked until golden – I’ll leave you to imagine the glorious smell and the glorious tastes (and to picture me taking home the immensely long strudel on the bus!). Full instructions and recipes are provided to take home. 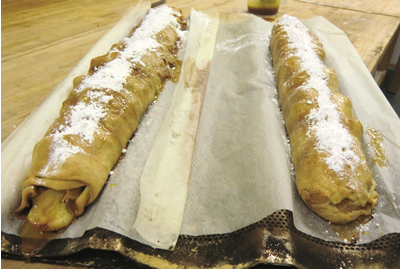 So next time, you’re at Eteaket, the Dome, Sygn, Wannaburger or one of many other places in Edinburgh that buy their bread from Breadwinner, savour the taste. If like Caroline and I you are frustrated by some restaurants’ lack of decent bread, just suggest where they should go!