Some dishes find a special place in a country’s conscience. Béarnaise sauce has stuck in the Swedish one. A rich emulsion of butter and lemon flavoured with tarragon and sharpened with vinegar, béarnaise sauce is a great companion to red meat. In Sweden, my home country, it is ubiquitous. You find it on most restaurant menus, often as “steak Bea”, as well as in your local super market where it is sold as powder, cold or heat in the bag sauce. In Sweden, country of culinary delights, you can even get it on pizza.

Since I arrived in Edinburgh in 1991, I haven’t seen béarnaise sauce on that many restaurant menus. It is an occasional treat. In recent months it seems to be having a bit of a come back and I saw it on the restaurant menu in Ondine when I was there in April.  So what is it that makes this sauce such a staple in Sweden and such an occasional visitor to Edinburgh?

Béarnaise sauce and me 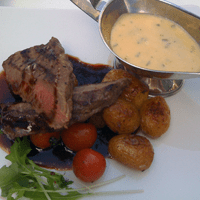 We moved to Stockholm from northerly Östersund when I was 11. We had a flat in a bustling up-and-coming area of Stockholm, four tube stops from the centre. Stockholm is a much larger town than the one I grew up in and the variety of foods and restaurants on offer was tremendous and exciting. On the corner of our black was a neighbourhood restaurant that sold half-decent food and did a good trade in cheap wine. (This was back when Swedes went to restaurants to drink.) Sometimes when my mother couldn’t face cooking we’d go there for dinner. I’d have the filet mignon black and white, with pommes frites, which came on a planchard. It was delicious! The black sauce was salty, dark and heavy, the béarnaise silky and tangy. 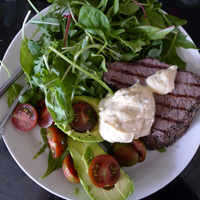 …or cold from the supermarket with peppered steak and salad.

Last year, in a moment of holiday folly, I went to a pizzeria in a suburb of Stockholm and ordered a pizza with fillet of beef and a side of béa for dipping. I ate it while watching a summary of the royal wedding on television in the tiny studio my cousin lent me for the week. Admittedly, it was the most ridiculous pizza I’ve ever eaten but it also was right up there with the best. Maybe it was the context: maybe it was the sauce. There’s something so soothing, so comforting, about the taste of béarnaise sauce. (I wanted to write “a good béarnaise sauce” but honestly, I like the bad ones too.)

Wikipedia suggests that béarnaise sauce was created for a restaurant opening in 1836 and is named for the province where Henry VI of France was born, Béarn. It has a similar base to the hollandaise and as such is not the easiest thing to make at home: egg yokes, bain marie and carefull whisking makes this warm mayo a tricky sauce. I’ve seen recipes for blended versions which could be both faster and safer than the original method: a curdled béarnaise is a deeply depressing thing.

A brief history of béarnaise sauce in Sweden

It is difficult to trace the Swedish obsession with béarnaise sauce but an article about the first Swedish motor hotel, Gyllene Ratten (the golden steering wheel) suggests that this is where béarnaise sauce was first served regularly. 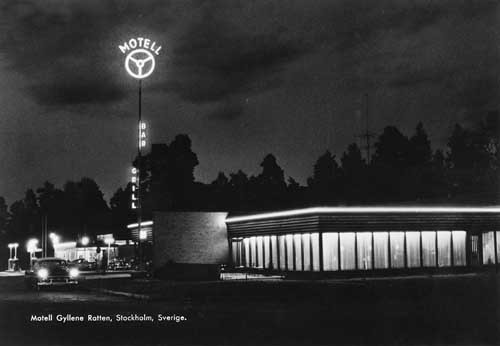 When it opened in 1957, Gyllene Ratten was a plush motel with expensive interior design, a bar and a grill. The venture was based on the American motels and was one of the first in Sweden to adopt that model. It seems the kitchen was also inspired by American habits as pommes frites and grilled meats features heavily. Over the years, the motel’s star faded and in 1989 it was no closed. Stockholm City Council took it over and turned it into a camp for asylum seekers. It was pulled down in 2007. A Shuregard storage facility now graces the grounds.

The motel lasted 50 years and the country’s fascination with one of its products, béarnaise sauce, stays strong.