I will either disappoint or re-assure but this is not a post about when I tasted wine naked. It is about when I went to a Naked Wines tasting and road show.

I’m a Naked Wines angel which means that I give the wine seller Naked Wines some money every month. The money goes into my account and can be exchanged against wine but more importantly, it is money in the bank that the company uses to support their many wine makers. This summer they took their wine makers on the road to several cities in the UK. Armed with bottles upon bottles of yummy wines, glasses and spittoons they met their adoring fans and offered them wine. What did we order? What did we taste? Lots and lots of wine.

There’s something deeply satisfying in stocking up on food or drink.

The event took place at Our Dynamic Earth, in the very depth of the building’s guts. The tickets were not free but were charged at £10 per head, to be refunded on any order made on the night. Mine didn’t get refunded because C. made a greater saving by signing up for his wings on the evening. (Angels get wings, see? Well, a pin with wings on, anyway.)

There were over 100 wines from all over the world to get through and C and I took our task very seriously. We drank lots of water, left a lot of wine, tasted half the room before looking for cheese and biscuits, and then tasted the rest of the room. There were white, red and rose wines, some sparkling, some desert. We expected no more. There were also producers of wine, willing to talk about their products and take you through the tasting of them.

The label with the most amusing name was Ladies Who Shoot Their Lunch. We tried three different wines here, a chardonnay, a Riesling and a Shiraz. I enjoyed the Shiraz in particular: it was fairly light but had a delightful pepperiness too. This was our first table so we tasted everything on it and ask for much information. As we moved on and the tables got crowded we learned to make fast judgments: if we didn’t like something we’d throw it out and move on.

The tasting covered France and Italy, Spain and Portugal, Germany, Austria and Slovenia, New Zealand and Australia, Chile, Argentina and South Africa, and, finally, Fizz, dessert and port. There was also a table of things that didn’t make it into the brochure, a mixture of red, white and fizzy wines. We didn’t quite taste half of the wines, but we came close. 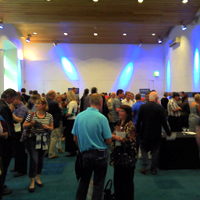 You could see the carpet in the large room we were in, but at times only just.

It is always interesting to watch what other people do at these events. It turns out that lots of people scoff cheese and drink enormous amounts of wine. I mean drink, not just taste. I don’t know why that surprised me, but it did. By the time we got to the cheese there was mostly something green – probably a flavoured cheddar – and celery left. I refreshed my palate with a good amount of celery and downed a couple of large glasses of wine before throwing myself into the tasting throngs again.

I had learned, by then, that my palate can only take so much before it becomes unresponsive. I knew this about whisky but thought that was partly because the high alcohol content in whisky knocks out the scent receptors in my nose. It appears that my tongue also gives up. After the first ten or so wines most everything we sipped tasted sour to me. Before we left I popped over to the corner where they were offering tastes of a white that I’ve been buying for a couple of months. I wanted to know if I’d still think it was good. To my delight I did. (Curious? It was Lunate Fiano 2010 from Alessandro Botter.)

The most scrumptious wine that we tasted was Negreiros Douro Reserva 2007, a Portuguese wine by Mario Negreiros that we agreed to by a case of on the spot. Unfortunately it was not for sale. Mario Negreiros has a couple of wines with Naked Wines but was also testing a couple that they are considering stocking. I really hope they do – and told them so – because this was a truly friendly and drinkable wine with a pleasant port character that would go brilliantly with winter stews or good cheese. Naked stocks Negreiros Douro 2007 but I wasn’t interested in that after tasting the Reserva. 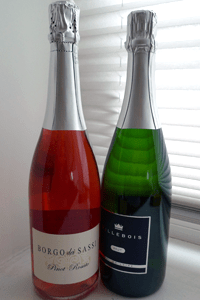 Don’t they make a lovely couple?

I’m not going to list everything that we tasted – I could, because I took notes like a good Angel – but will go straight to what we ordered. My plan was to get a case of red and a case of white, or maybe build a couple of mixed cases if there were lots of things we liked. That’s not quite what happened.

C’s quite fancied the Villebois Sancerre 2010 but I didn’t like it. I was late in the evening so I think it was a taste bud thing because I normally like Sancerre. Instead we agreed on a case of Villebois Brut NV. It was dry and sparkling, as you’d expect, tasted like a good champagne and will stand sitting around for a while. It’s always good to have a stock of sparkling wine in the cupboard, so this buy wasn’t all that surprising.

We’re now both Angels and can benefit from cash backs, special offers and wine delivered to the door. All rather handy since we’re low in white, although we have a decent stock of good reds. And more good fizz than you can shake a champagne whisk at.