Signe Johansen’s Scandilicious is an instant classic, offering an authoritative insight in to the wonderful world of Scandinavian cuisine. It welcomes everyone from the occasional kitchen dabbler, whose fancy has been taken by the crispbread from Peter’s Yard (indeed, many of you will have seen Signe during her recent visit to that very establishment), to the committed gastronomic adventurer, who likes nothing better than finding herself elbow deep in pickling liquor. 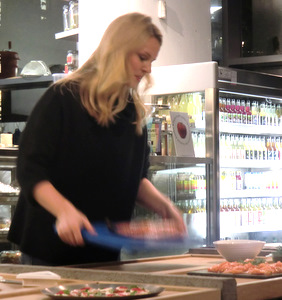 Scandinavian cuisine has, it seems, been a victim of its own simplicity. It relies upon high quality, locally-sourced ingredients, prepared with a light touch to keep the focus on natural freshness and native flavour.

Structured by meal, with a lovely section on Lunch that pleased me greatly, the recipes reflect the ethos of calm simplicity, with the majority involving a relatively small number of ingredients.  The cooking method often offers flexibility in terms of spicing, or factors-in requirements that some may have to remove or replace dairy products. This gives you the sense of a living, breathing cuisine, open and responsive to innovation, changing with its culture rather than stagnating in dusty tradition, but building upon a solid set of guiding principles.

The washed-out lighting of the book’s photography adds to the sense of freshness, like a crisp new day breaking and bathing you in a cool, replenishing dawn.

There’s no way to adequately review a cookbook without getting stuck-in and trying a recipe or two.  I love cooking soup, so was delighted to see a number of new flavour combinations to try. I tried both the Roasted Swede Soup and the Mama Johansen’s Vegetable Soup.

The roasted swede was like a little bowl full of sunshine.  The sweet roasted flavour of the swede worked beautifully with the freshly ground nutmeg to create a soup that provided much comfort and joy.

The vegetable soup was a neat take on what to do with leftovers, delivering a lovely set of flavour combinations. The soup was very light and creamy, so much so that I thought the addition of sour cream a little unnecessary, other than for aesthetic purposes.

Both will be added to my regular rotation of soups, forthwith.

I also tried a classic sandwich combination, making a pea puree with a tarragon and citrus twist. This was spread generously on crisp toast, then topped with crispy bacon lardons, to make a lovely sweet combination. I went a little overboard with the lemon, but that was my own mistake. 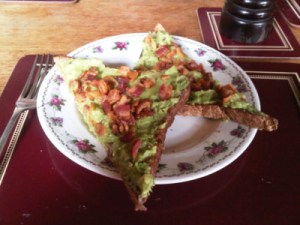 I used the puree I had leftover as a little accompaniment, in the style of mushy peas, for a plate of fish and chips I indulged in, later that day. I must say that it worked incredibly well. I enjoy happy little accidents like this.

I enlisted the help of Lunch Quest’s inspiration and guiding light, Miriam, who is quite the baker, to try out another of the recipes. She had a pop at the Spelt and Fennel Seed Bread. Here’s her verdict:

“When I was asked to make the spelt and fennel seed bread, I had grand plans of getting a stone and baking lots of delicious breads and bagels and the like…but things never go to plan. So it was off to the shops, at the last moment, to get more ‘strong bread flour’ to make the bread. I had trouble finding the fennel seeds, and since the recipe said to use fennel seeds, or whatever you have, I chose not to worry about this. The aniseed flavour of fennel seeds doesn’t really rock my boat anyway (something about a long night of absinthe consumption, with bad results). 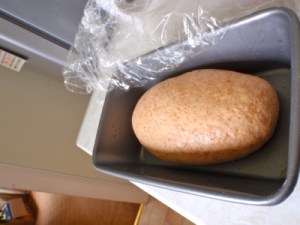 “The bread itself was easy to throw together. Not hard to work with and I even enjoyed kneading it. The recipe made me think more of an American biscuit recipe with its buttermilk, butter and flour, actually. I could have left out the yeast and honey, and just rolled the things out in wee scone shapes and had wheat biscuits instead. 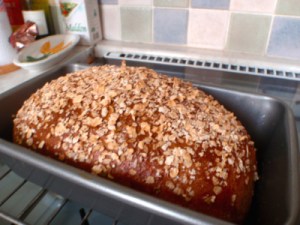 Fresh from the Oven

“Anyway, I topped the uncooked loaf with flakes of oatmeal, since the only other seeds I had were sesame and I didn’t fancy them on my bread. I allowed the bread to proof and then popped it in the oven for the prescribed times, while I got on with some other work. 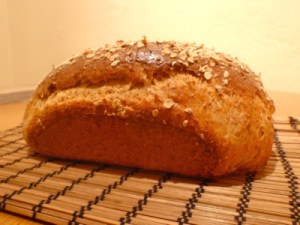 “An hour later, I had a beautiful loaf of spelt bread that reminded me of two things after I let it cool and then tasted it. Firstly, it reminded me of buttermilk biscuits, from the interior crumb to the taste of the buttermilk, it felt like biscuits in loaf form, which is no bad thing. Secondly, it made me think of those cakey breads that fall apart on contact. Again, not a bad thing, but slightly more difficult for sandwich making. 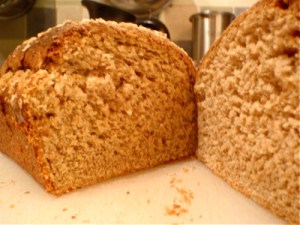 “The whole process took about 3 hours, from shop to pulling it out of the oven. I’ll make this bread again. Or I might use the recipe to enhance my own biscuit making here in the UK, where they don’t seem to want to rise to the fluffy heights like they should.”

So, some really lovely recipes, with an excellent sense of flexibility, to suit the culinary pioneering spirit, but also fit well with ingredients you might readily have to hand.

Overall, I loved the book’s style, elegance and charm, coupled with the compelling case it makes for further exploring a hitherto somewhat overlooked cuisine. This strikes me as an ideal gift for the food enthusiast in your life. They, like me, will be drawn in by its welcoming warmth and comprehensive array of comforting treats.

Lunchquest provides us with a great platform for reviewing all the varied and alluring lunch and dining options that Edinburgh affords us. With over 1,000 posts on the site, we continue to be impressed with the quality we find. I'm a particular fan of soup, spend a lot of time drinking espresso, am always on the lookout of good cocktail places, and I'm developing a greater appreciation of our local beer ;-)
View all posts by BKR →