The Living Room’s new menu: Dining in the Dark is an exciting way to try it

Since this post was written, The Living Room has closed.

It’s rare that I turn up half an hour early, but for the Dining in the Dark event at The Living Room I did. It wasn’t intentional but a happy coincidence since it gave me plenty of time to sit back, relax and fight with my phones. The screen on my main phone was dying and I was having problems getting my ancient iPhone back up and running. And I needed at least one of them to do its business because I was there to taste the new menu and wanted to tweet about it as I did. And we’re ready to eat anything put in front of us.

As it turns out, tweeting with a blind fold is, well, difficult. So is tasting. This is how it worked: 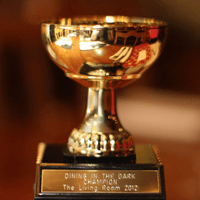 It was great fun and somewhat disconcerting. We sat there, sniffing food stuffs, tasting them, and trying, desperately, to separate and recognise flavours. It was a bit of a competition and, much to my surprise, I took home the trophy. I thought Total Food Geeks‘ Georgia had it in the bag, honestly I did.

To the menu. This is what we tried:

Thank you to Kondrad Mielniczuk at Meow Studios for the images.