Wedgwood impressed when we visited three years ago. I was hoping we’d have a similarly good experience this time and – not keeping you on tenter hooks here – we did. The restaurant is on the Royal Mile, next door’s to Cranachan & Crowdie. It’s a cozy, fine dining establishment with a number of awards to its name. The style is French Scottish, local ingredients treated with classic techniques and modern tweaks. The staff is helpful, cheerful and attentive; the clientele interestingly varied. When we visited there there was a company party upstairs while couples and families (with adult children) dined downstairs. 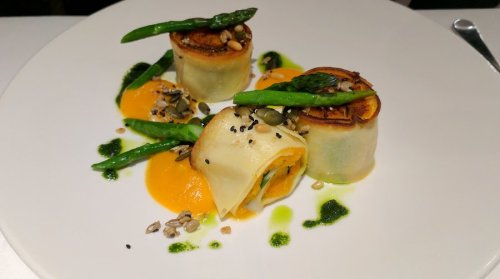 We’re sat in the cosy down-stairs, a narrow room, elegant in cream and brown. The wallpaper, made from reeds brought to mind both heather and sea-side. While we’re chatted and got comfortable, I consumed most of the canapés: seaweed shortbread with smoked salmon and caviar, haggis and beef roulade, white onion and thyme soup.

To start, we both went for savoury desserts.: Christopher has the pea panacotta and I the lobster Thermidor crème brulé. I had difficulty choosing starters. The fir cured salmon sounded lovely, the carpaccio was tempting too. Wedgwood has a good selection of seafood on the menu and always a couple of interesting vegetarian options.

The brulé glass was topped by a shortbread. The Parmesan shortbread with its cluster of caviar beads was fabulous. Its delicate crunch was a welcome accompaniment to the rich lobster-infused cream. A mouthful of smoked dulse* bloody Mary sorbet was refreshingly more-ish.

The pea panacotta was a little firm but had the most lovely flavour. I could not stop looking at it: the bright pastel green was so inviting. 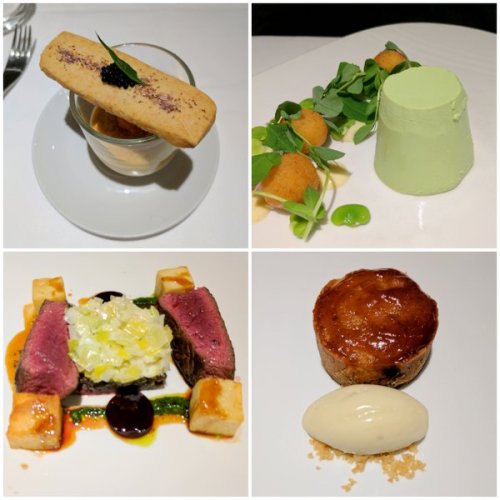 I was seriously tempted by the spelt risotto with a duck egg on top but since Christopher was having the other vegetarian, the rotolo, I decided to choose from the carnivorous options.

Rotolo are filled pasta tubes cooked round end up. These were filled with butternut squash and spinach, and served with crisp asparagus, crunchy seed granola and splashes of pesto. It was a really lovely dish.

Having considered the steak, the hake and the lamb, I settled on the venison. The venison was a great of autumn flavours. Creamed leeks were soothing, beetroot and venison haggis added earthiness, pesto a note of brightness. The truffle jus was subtle. All in all, satisfying and fun: there was different textures and flavours on the plate, keeping the palate interested.

We’re drank a white throughout a Trebbiano, not a grape either of us had tried before. We both prefer white to red and it’s always interesting to find one that will work with both our meals. When I go two times fish, it’s less of a challenge, but steak or venison needs a wine that can stand up to it, something aromatic, not so dry it ends up tasting sour.

“I’m not sure I can manage desert”, Christopher said. Then we had another look at the menu and found that, just maybe, he could. If there was also coffee. So there’s was coffee.

I plumped for the rowan berry bakewell tart, a big buttery pastry with great frangipane and interesting jammy fruit flavour. It came with Tonka bean ice cream. I hadn’t had Tonka bean before and was interested in what it would taste like. I’ve heard it described as perfumed which is on the nose: floral, subtle, familiar yet difficult to describe.

Christopher opted for the chocolate tart which came with a passion fruit parfait. The tart was dark, smooth and very rich, the parfait light and tangy.

A good meal makes me happy. We emerged into a chilly but clear Edinburgh night feeling sated and satisfied. Arn in arn, were walked up the Royal Mile, having decided that a good walk would be better for us than a taxi.

* Who do we know who do smoked dulse? Mara Seaweed, that’s who. I didn’t ask if that’s where it was from, I was just pleased to see seaweed used to good effect.

Caroline dinner at the invitation of Wedgwood