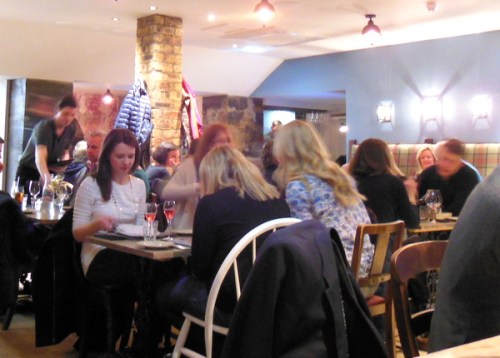 Happy diners at Scran and Scallie

This review is in partnership with Match.com

Those of us who live in this city know the expression well. “Edinburgh is a village”. It’s actually more like many villages each with its different identity, something that visitors to the city could well miss. I enjoyed my walk down from Princes Street to Stockbridge, past the impossibly small area where the Sunday market now thrives, past independent businesses. There’s Peter’s Yard Bakery and Mary Portas’ thrift shop and the renowned George Bower’s butchers. Although the shops were closed, it was very tempting to stop and peer in to the windows. Raeburn Place has a friendly air. It’s the perfect location for Tom Kitchin and Dominic Jack’s latest venture, a public house serving food.

The menu on the map

Scran and Scallie has taken over the premises well-loved Italian restaurant San Marco’s after the owner retired after 30 years. If you can judge an eating establishment from its exterior you get the impression a modern, understated pub. It would almost be easy to walk past it but for the number of people piling into the bar. It was Friday night after all.

G was my date for the night and as he was arriving separately, I inched my way to the bar. Scottish brews from all over the country feature in bottles and on draft. There are Scottish gins, whiskies, ciders and drinks from further afield. A short cocktail list invites the drinker to ask for something made especially if what’s listed doesn’t quite suit. G who has now arrived, chooses to try a Highland beer on draft which definitely hits the spot.

Tom’s motto, if that’s the right expression, is Nature to Plate. This is emblazoned on the staff’s clothing. It’s definitely not lip service. On a map on the wall proudly hang luggage tags marked with the provenance of ingredients on the menu. His mission is to modernise Scottish dishes, fuelled by his research at Scotland’s National Library.

The interior is stripped back. There’s plenty of exposed brick and rather tactile wood. In the restaurant itself although the tables match, there’s an eclectic mix of chairs. “I can see which chair I’m going to be sitting in” quips the male half of the couple who arrive next to us. Her chair has what I can only call a hairy throw on it – it looks supremely comfortable.

Gastropub is a word that is bandied about a lot. I think it’s something we have a vague idea of what it is – a pub that sells posh food. It appears that all of Edinburgh is keen to explore Tom Kitchin’s interpretation. It’s very busy, the mix of diners wide.

The menu has starters, mains and desserts (here called Yer Starters, Yer Mains and Yer Desserts) and also small bits (sides), vegetarian dishes and salads. Some dishes are familiar such as steak and chips or fish pie. Others have a nod to modern trends such as a Wagyu Beef burger. Others are just plain unexpected: English snails! 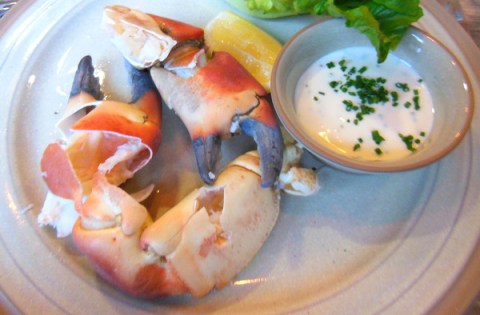 G opts for the Sheep’s Heid Scotch Broth. This is unusual as I know it’s something he’s not usually keen on. I choose the crab. The crab proves to be a great interactive dish. The claws have been cracked and I have a lobster pick, but there are pieces I really do need to get to. G helps me out to crack the shell further. Rather satisfying. The crab is delicious, beautifully poached. It almost doesn’t need the chive and lemon mayonnaise served with it.  So, to the star of the meal, the broth. “You’ve got to taste this, it’s amazing”. The stock that forms the base is the most rich, delicious concoction. I was almost ready to ask G to swap for my crab.

G’s hogget arrives – this is lamb that’s a year old, so not as mature as mutton. It’s presented in a beautiful mound nestled on green vegetables. The meat is rich, unctuous. The vegetables light and tasty. Fabulous cooking. I’d chosen the haddock and chips with chunky tartare. I rather wished I’d been more adventurous. 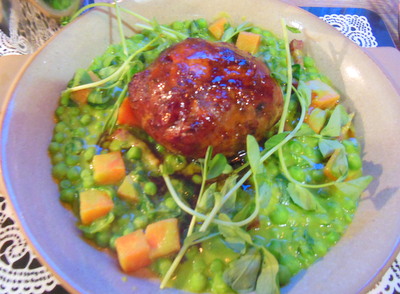 Hogget at Scran and Scallie

Of course, dessert had to follow. I do like the idea of having a crumble of the day on the menu, but decided to go for the rhubarb and ginger fool. G plumped for the blood orange jelly. The jelly arrived quivering beautifully. The vanilla ice cream that accompanied it was particularly flavoursome. The fool was topped with a slice of very thin biscotti and but rather subtle in flavour.

Who should eat at Scran and Scallie?

There was a good mix of small groups, couples and adult families the night we were there. There’s a friendly laid back atmosphere providing plenty to observe and chat about and if conversation flags. Slightly high noise levels mean you to have to lean in closer to chat to your companion – no bad thing. 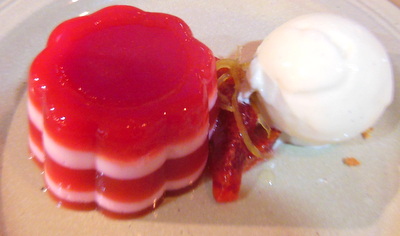 The restaurant has been open less than two weeks and the staff are still getting used to their roles. They’re very chatty and helpful and dealt with another diner’s dislike of a dish particularly well. However, they seem confused at times. It’s something that I am sure will become more slick as the weeks pass.

The dishes we tried varied. Some of the cooking was exceptional, other dishes were less flavoursome. Our waiter confirmed that chef is taking on board people’s comments . We’ll be very happy to have a return visit.

Although it is possible to turn up and wait for a table, demand for tables can mean that you could wait for an hour. I’d strongly suggest booking. 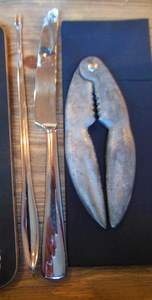 Tools to tackle the crab