Would I like to go to a cabaret and sparkling wine? Absolutely.

August in Edinburgh is special. The many different festivals bring in a lot of people and areas that are quiet the rest of the year turn in to beer gardens and open-air restaurants. Performers from all over the world come in and all kinds of spaces are turned into venues. I went to The Hispaniola, a Treasure Island themed restaurant on Drummond Street, to see OzCabaret‘s Champagne Cabaret last Saturday. 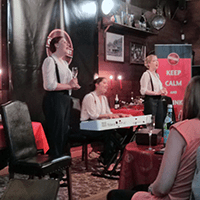 A champagne cabaret is a wine tasting with a difference. While the audience tastes wines – in this case five sparkling wines – the three songelliers (the cabaret’s cute name for people who match songs to wine) entertain with champagne themed songs and stories of love and loss. Some stories are funny, some poignant. The songs too range from the vivacious like La Vida Loca, the unexpected like Killer Queen, and songs I hadn’t heard before like the nostalgic Champagne High and bubbly Pink Champagne. Together, songs and stories make an entertaining, engaging and intimate whole.

On the table were sheet’s worth a list of the wines we were tasting and pencils so we could take note. I rather enjoyed the extra questions: “if this wine was your ‘the one that got away’, what are the characteristics that linger?” (Days later I also enjoy some of my responses: “grass and bitterness”, says the scrawl under the above question.) It’s a fun way to think about how a drink makes you feel, not just the liquid’s physical characteristics. The performers took this further by introducing each wine as if it was a man. I’ll remember Mr. Burge, our first, fondly. 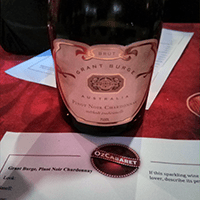 Mr. Burge, full name  Grant Burge Pinot Noir Chardonnay, is a sparkling wine from the Barossa Valley in South Australia. OzCabaret played there earlier this year and the vineyard helped sponsor the show in Edinburgh by supplying wine.  The second bottle we tried, Fresita, was the evening’s pink, a lusciously fruity Chilean wine blended with strawberries. Drink number three, Cairn O’Mohr’s Braes o Gowrie, was non-alcoholic. Smart move! Number four, I Heart Prosecco, was the driest prosecco I’ve ever had but had the traditional pear-drop nose. The last wine we tasted was Guy de Chassey Grand Cru Brut champagne. It was smoothly fizzy, smelled delightfully yeasty and tasted like the very epitome of champagne. I admit that I wanted to like that one the most but think the Grant Burge came out as my favourite. (And I’m not saying that just because Grant Burge have teamed up with Vino who stock and offer show goers 10% off the wine.)

If you want a pick-me-up, a fun and lightly intoxicating start to an evening, visit Champagne Cabaret. OzCabaret is at The Hispaniola until August 25, 16:00 every day except Mondays.

The picture of the songeliers and bubbles courtesy of OzCabaret.