Foodies Festival, Edinburgh – a day of sunshine and gin 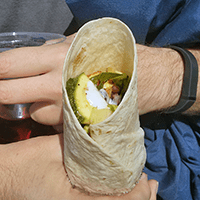 The Foodies Festival is what you make it: spend the day watching cookery demonstrations and tastings, sample food and drink, and shop from the many suppliers. It’s an exciting way to get to know new producers and products.

A mostly sunny Sunday, C. and I packed our rain jackets and took a leisurely walk over to Inverleith Park to see what this year’s festival had to offer.

There’s a lot to take in, so we started by visiting one of the cider wagons for a refreshing beverage to sip while walking around the area and deciding what we were interested in. I spoke to Thistly Cross to see if they had their snakebite, but unfortunately they didn’t. What a pity – it’s such a lovely drink. 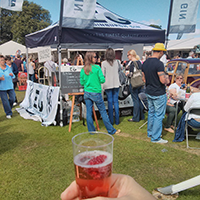 Edinburgh Gin in the background, a raspberry gin fizz in the foreground.

Gin is having a moment, and luckily it’s a long, languorous moment. There were several gin producers at Foodies. We visited Edinburgh Gin and I told C. how fabulous an Edinburgh Gin Raspberry Fizz was. The upshot was two fizzes: elderflower for C., raspberry for me. The elderflower gin had a potent elderflower scent and flavour and might just have pipped the raspberry gin to the post for my favourite flavoured gin. We also visited the Martin Miller’s stand to admire another of our favourite gins and then promptly went to Sipsmith.

Sipsmith gin has the most beautiful label on their intensely dry gin. While C. sipped a double G&T, I tried the softer option of their Summer Cup, a gin-based drink infused with rhubarb, cucumber, Earl Grey tea and lemon verbena. With mouths tuned to different flavours, I picked out the rhubarb immediately. C. tasted cucumber and lost interest. I really enjoyed the Summer Cup. It’s gentle and rich, without the burnt-sugar aftertaste of Pimm’s. It came served with lemonade and a slice of cucumber. I’d like to try it on the rocks.

The tonic of choice at the festival was Fevertree, interesting also my default choice for tonic. (My local supermarket doesn’t sell Fentiman’s, or I’d buy their tonic too.) 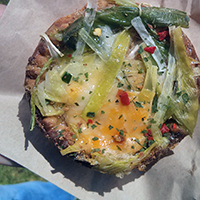 Posh pork pie – salty but flavourful, crunchy and rather lovely.

There was a lot of interesting food on offer – especially for carnivores. I fell for a Gloucester Old Spot pork pie with stilton from the Posh Pork Pie Company, and C. had a pan fried halloumi wrap with roast carrot salad from Wild Rover Foods. Wild Rover Foods were finalists in the British Street Food Awards 2012 and I can see why. The food was good, fresh and prepared to order. We were particularly pleased that they had two stations, one for meat and one for veg. It’s not rare for vegetarian street food to be cooked on the same plate as the meat so it’s great to see a company that separates the two. 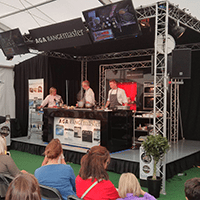 I quite fancied some vegetable curry, and a crepe, but the meals at Foodies are not tasters, and there’s only so much you can eat. So I had to pass on trying something from the Galvin Brasserie de Luxe, Ruan Siam, Puddledub or any of the other restaurants and food wagons. Instead, we spent some time watching Craig Sandle, from the Galvin Pompadour, make steak tartare and salmon Niçoise. I was intrigued by his Niçoise. Craig wilted the lettuce with a little butter (actually, a lot of butter, but that’s not how he normally does it). The resulting salad looked very attractive and was, I have no doubt, delicious if rather richer than a make-at-home Niçoise.

There were several different tents for presentations: drinks in one, cake and chocolate in another, even a kids tent. You’re supposed to book in for talks, but we hovered at the door of the tent instead of booking a seat. That has the added benefit that you can move on if the talk doesn’t grab you. The draw-back, of course, is that you get wet when it starts raining. 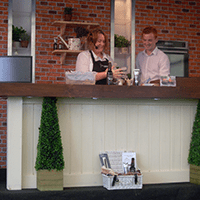 There were some interesting producers too. We looked at seaweed from Seaveg, vanilla from Little Pod – who also took a turn in the Cake and chocolate tent. (Thank you to our ticket competition winner Vohn McGuinness for the picture!) Real Foods were there, as well as Stoats, Blackwells Books, and a lot of other companies. From Real Foods, I bought a Rude Health beetroot treat bar because it sounded so intriguing. I haven’t eaten it yet… We also picked up some cupcakes from Liggy’s Cake Company.

The Foodies Festival is a fun day out. There’s a lot to eat, buy and see. It’s a pity the website doesn’t list everyone who was there, and I went on the last day when the exhibitors were all getting tired. The sun was shining, and it was still busy, and had a good buzz. I look forward to the next one.