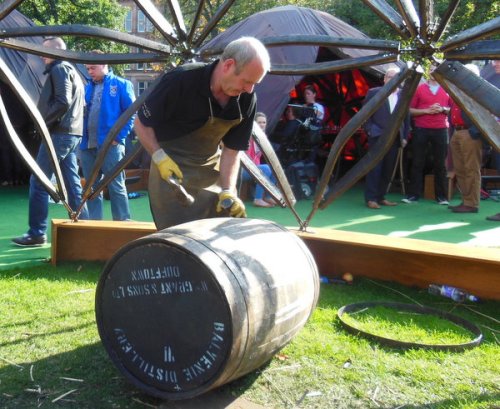 A master craftsman at work

The Balvenie Whisky Fete is part of The Balvenie Master’s of Craft campaign, celebrating British craftsmanship through a series of events throughout the United Kingdom and an award programme. The fête featured bespoke Geodesic domes made from Whisky
casks from The Balvenie distillery 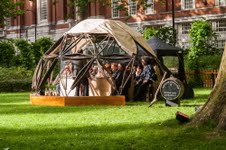 Within a dome, I discovered Head Cooper Ian McDonald. He explained that the dome was made using European oak barrells which have been lightly charred inside to enhance the flavour of the whisky. The whisky cask that Ian will use to demonstrate his technique was a bourbon cask and more highly charred.

How to make a cask

Ian deftly dismantles the bourbon cask and stacks them carefully in numerical order. The staves vary in size and this variation contributes to the shape of the barrel. He then starts rebuilding, at times adding then removing the rings. He shows how reeds are added to stem any leaks and all the different tools required to finish a barrel.  Do have a look at a master craftsman at work! 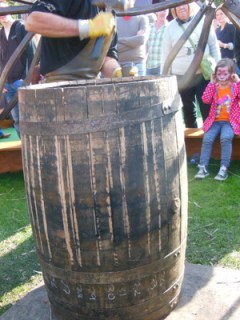 The Balvenie is a unique range of single malts created by David Stewart, The Balvenie Malt Master. Each has a very individual taste, but each is rich, luxuriously smooth and underpinned by the distinctively honeyed character of The Balvenie. Little has changed at Balvenie Distillery over the years. Uniquely they still employ all the traditional crafts of malt whisky making, which is why The Balvenie tastes the way it does.

Join the Balvenie Warehouse 24 community to delve further into the world of handcrafted malt.

Read more on oak barrels on the Thirsty Fifty blog.