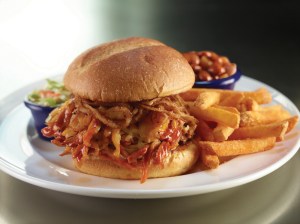 There’s a lot of energy in a Hard Rock Café this Thursday evening. The music is pumping, the shop is full of people looking at the merchandise, and the tables are full of people eating: families, couples, groups. I’m here to try the restaurant’s Smokehouse Range. Classic American recipes for pulled pork, ribs, chicken – all delicious. But that’s not the only reason why I am here.

It’s hard to believe that the Hard Rock was born back in 1971. Isaac Tigrett and Peter Morton two music loving Americans couldn’t find an American style burger in London so they decided to set up a place providing good American food with Rock and Roll music. Eric Clapton became a regular. They persuaded him to donate one of his guitars to put on the wall. And so it began. Today there are more than 175 locations worldwide in 55 countries.

There’s quite a bit of friendly rivalry between the Hard Rock Cafés (HRCs) in different countries, and Edinburgh is no exception. Edinburgh is out to get the best ratings on social media and the greatest number of blog posts. Berlin and Madrid have already had their events. How will we do? 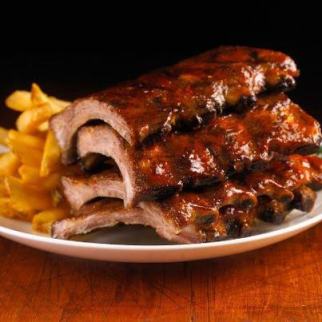 HRC is a chain of restaurants and each has its own distinct personality and memorabilia whilst fitting within the overall brand. But had you thought about how their dishes are prepared?  You might think that dishes are produced centrally and shipped in. It’s certainly not the case at HRC as I am about to find out. 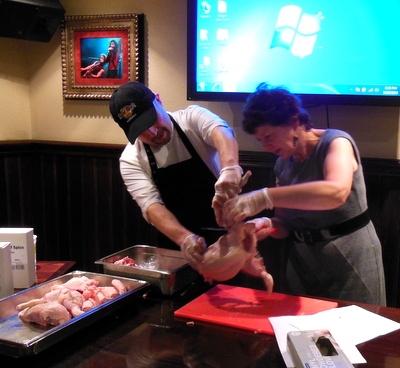 So with heavy metal in the background, we meet Adam Weir, head chef. He joined the restaurant 3 months ago, hot foot from heading up a kitchen up in Afghanistan. He proudly explains that  everything is cooked from scratch by his team of eight.  They use free range hens, local pork shoulder and ribs from France. And to get a unique Hard Rock flavour, they smoke the meat in house and then add their own recipe barbecue sauce.

Here I must admit to being a bit competitive. Adam gets us to smell the spice mix that’s rubbed on the meat and to shout out what spices are in it.  I win a Hard Rock t-shirt for my correct answers. He then shows us how to break down a chicken into pieces and, yes, I get up to have a go! I do admit I’ve done it before, but  not with Adam’s technique of holding it in the air! I managed without making too much of a mess. 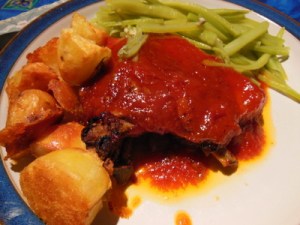 My dish of Pork with Hard Rock Cafe barbecue sauce

We discovered all the ingredients that make the barbecue sauce, including an intriguing item “liquid hickory smoke” a colourless liquid with a gorgeous dusky smell. Adam’s passion for the dishes they produce is infectious.

I particularly enjoy the juicy pulled pork and the smoked chicken wings with classic rock sauce. The portion sizes are huge.

We wend our way home with a jar of the barbecue sauce, which I later cook with a thick pork chop – delicious!