At Edinburgh Foody, we get a  lot of interesting information and offers. The other week,one from Eat in Season, a campaign run by Greener Scotland. The campaign’s aim is to get people to cook with local, seasonal ingredients, and they have the support of Tony Singh, from the television programme Incredible Spice Men, and Seumas MacInnes, from Café Gandolfi in Glasgow. Both chefs created tempting recipes for autumn and Seumas’ dishes have featured in his restaurant. We were asked if we wanted a recipe – and a hamper of ingredients – for carrot, leek and mustard seed soup. I jumped at the opportunity. 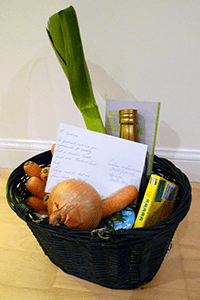 My soup hamper. Isn’t that lovely?

Carrots are in season so this is a good time to cock up a storm of Scottish carrots. The Eat in Season campaign stresses the importance of eating seasonal produce not just because its local, but also because they taste best when they are in season. Another benefit of seasonal produce is also that it’s usually cheap. Not that carrots will break the bank any time of year. But they will fill the belly and put a smile on your face.

Carrot soup is a classic and comes in many different versions. When I grew up I’d carrot soup, plain and simple.  My first meeting with exotic curried carrot, now a favourite, was at an electric hob resting on top of a fridge in a student flat in Montpellier. I was amazed at what I understood to be a traditional Canadian recipe and have since learned how much better it is smooth instead of chunky.  When I arrived in Scotland, I was surprised by the many versions of carrot soup on offer here: cream of carrot, carrot and coriander, carrot and orange, and carrot and ginger turn up on menus and dinner tables regularly. Now, C. makes a hearty carrot and lentil soup that I have for lunch most days through winter. People’s creativity in making the humble but economical carrot a delicious soup base thrills me. Here’s another interesting recipe.

The original recipe calls for 1.5 litre of stock. I like my soups a little thicker so I only used 1.2. This recipe, in the tradition of carrot soup, can be adjusted to your own taste. It’s an earthy, spicy (but not hot) soup with a lovely mustard speckle, perfect for dipping toast or pita bread in. I’ve given rough quantities instead of exact one in grams. 1 large onion weighs about 150 grams, and 10 large carrots about 900 grams, but the exact quantities are not all that important. This soup will still taste great with a bit less onion, or a bit more carrot.

Serves four as a main or eight as a starter, and takes about 45 minutes, all in. (I made and ate it in my lunch hour. Mmm!) 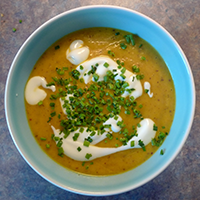 Check out other  recipes