This post could consist of just 4 words. You Must Eat There.  I will however, write a little more and leave you with the photographs and some impressions to savour. Bookings are slightly easier to make now, but count on waiting 3 months unless you are very lucky. Mark 1st August in your diary when the next set of dates are released. 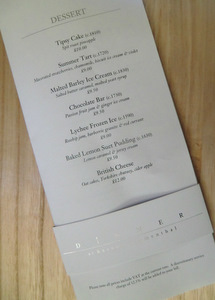 I’ve not been to the Fat Duck (I will, SOMEDAY, soon…), but I think that Dinner by Heston must give you a little insight into Heston Blumenthal’s quest for perfection. It is beautifully implemented by Ashley Palmer Watt.

One of the waiters took me over to see pineapples being roasted on an extraordinary spit. You can see the cogs whirling round from where you sit. When you get closer they are rather like cotton reels on a sewing machine gently turning and basting.  Chatting to the waiter I discovered that it is his first week. He’s moved from Winchester to work at Dinner and is thoroughly enjoying himself. When I ask how long it takes to roast a pineapple, he confesses he is not quite sure. He’s not got the huge bible of facts that each employee has off to pat yet. Almost as soon as I get back to the table, he tells me he’s checked – two and a half hours. The passion is there in each of the staff as we discover throughout the evening. 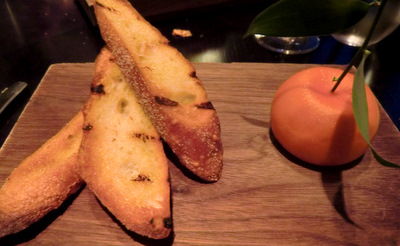 In a way, it is odd to taste something you saw being created on Heston’s Channel 4 series, and I know I want to go back and watch again to really appreciate what was involved.

The menu details when the recipes were first written and by whom. What you cannot quite imagine is how these recipes are transformed into what is on your plate.

I had to try the meat fruit. This was rich, delicious and super smooth paired with crispy buttery toast. The recipe dates back to around 1500. Mr EF had Hay smoked mackerel (1730) which was actually like ceviche. It came with the thinest possible lemon slices and a Gentleman’s Relish sauce. Astonishing flavours. 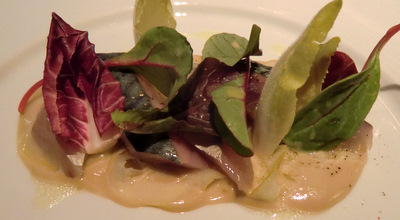 My second dish was powdered duck (c1670) the highlight of my meal. Almost impossibly soft and fragrant. Here we consulted another waiter who explained that it had been brined with many different spices then cooked in a sous vide for 9 hours.  Mr E F had the spiced pigeon (c1780) which again was soft and unctuous. He’d also asked for some triple cooked chips. Sceptical as he thinks his double cooked chips are pretty good, he had to agree that they were beautifully crispy and tasty. 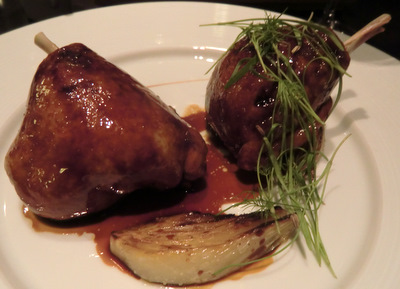 Here the discussion got on to potato. I’d enjoyed my mashed potatoes at Jason Atherton’s Pollen Street Social the day before which were very buttery. Here the mash was both buttery, but tasted of potatoes rather than butter. We discovered that Belle de Fontenay potatoes are used both for the mash and the chips. The potatoes for the mash are also cooked in the sous vide.

And so to dessert. I of course, had to try the roasted pineapples with the Tipsy Cake (c1810). The pineapple was not sweet and had a very slight barbeque-ish taste. To me it didn’t quite go with the brioche topped custard loveliness but was very flavoursome. 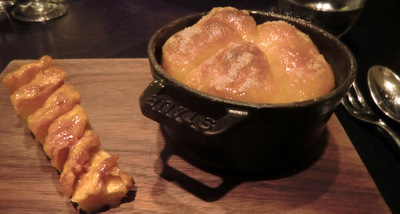 We love the food, love the staff’s passion, the attention to detail.  A steak dish has been taken off the menu as it has proved difficult to get it exactly right – tricky when it needs 3 days to cook. 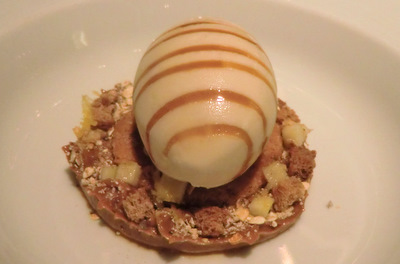 It’s great to have a glimpse into the kitchen with glass windows on three sides. It’s fascinating to read where the recipes came from and when.

The Mandarin Oriental itself is very dark, brown and if it weren’t for some quirky jelly mould lamps a tad sombre. But hey, that hardly matters!