Las Iguanas wants to tempt you to a Latin food fest

Las Iguanas throw a good party. At their launch, there were cocktails and Brazilian glitter galore, as well as a photo both with hats and maracas. That night, my friend and I snacked on whitebait and chicken skewers, and enjoyed caipirinhas, mango Collins and cana Royals. When I was invited back for dinner, it was the latter of these that I decided to have while we perused the menus. The cachaca isn’t overpowered by the raspberry liqueur and elderflower but keeps a punch. It was an interesting night – I had laryngitis and couldn’t really speak so C. had to do the ordering as I could only point and wheeze. Luckily, you can have a good night, even if only one of you can talk. 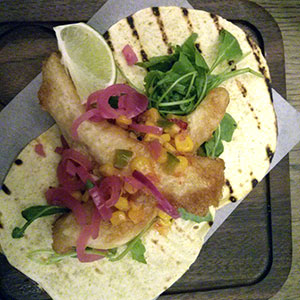 Fish tacos get an interesting bite from pickled pink onions.

I didn’t know about Las Iguanas before it came to Edinburgh. They have a couple of other restaurants in Scotland – one in Glasgow, for example, but most of the 38 restaurants are in England. They are independent, which means that they are not owned by another chain, just themselves. Their mission is to take Latin food to the world, in a fun and cosy environment. The decor is sourced from South America. The walls are warm with rough wood and large clusters of lampshades provide light and visual interest. One of the two types in this restaurant reminds me very much of a Swedish design that everyone had in their kitchen when I grew up in the 70s. Dotted around groups of a warm orange shade they looked glamorous rather than pedestrian. At night, the muted colours give a cosy feel. The layout is relaxed and can accommodate couples, singles, and groups of different sizes. The ground floor restaurant has large windows facing George Street. It looks very inviting when you’re outside.

A wide and varied menu

‘Latin’ is a fairly wide description and the menu takes inspirationfrom Cuba, Peru and Brazil. To start, we shared a guacamole and I had the fish tacos. (Regular readers of this blog will know that I’m a fan of fish tacos.) The tacos were were tasty. I wanted to put hot sauce on them – the sauce on the table was my favourite – but they didn’t need it. 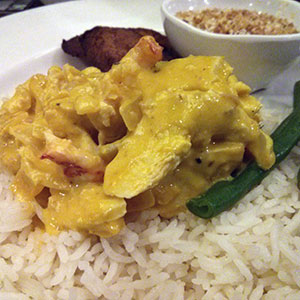 Xinxim is a warming, soothing dish great on a cold afternoon. When you’re very hungry.

For mains, we decided to try something we hadn’t had before. Ignoring the Mexican section of the menu – fajitas, burritos and enchiladas are nice, but we wanted something new – and went straight for From Brazil and Beyond. I’m not a big eater of chicken, but the waiter said the Extraordinary Xinxim was his favourite, so I decided to give it ago. A coconut based, creamy curry with chicken and crayfish, this was a very soothing dish served in a lovely clay bowl on top of a heater. I sprinkled toasted coconut on top for crunch and sweetness, and dipped plantain in the creamy sauce. Christopher went for the Bahia Moqueca, another coconut curry, but this one with butternut squash, palm hearts and spinach. It too came with a coconut topping, plantain and rice. It had a different character from the xinxim but was also very good. Both dishes are great autumn warmers and both were filling.

There are a good number of vegetarian options as well as grilled sandwiches and salads that can make good lunch options.  If Mexican classics of other Latin options don’t appeal, there’s always steak or chicken from the grill. For sides, yu can have a cassava fries (a headily starchy treat), standard or sweet potato fries, black bean fritters, plantain and corn on the cob. 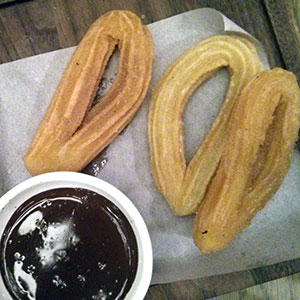 Because I had a starter, I decided against dessert but Christopher tried the churros. The ganache dip was chocolatey and creamy, but the churros themselves were crunchier than we’ve come across before. There are other dishes on the dessert menu that look tempting. I’m pleased to see a Cuban style affogato since I love tipping warm coffee on top of ice cream and eating the resulting mess. Adding a bit of rum sounds like a great idea. They also do tes teches, a traditional cake made with three types of milk. I’m curious to try this at some point. The capirotada, a cinnamon, date, bread and brioche pudding also sounds intriguing.

The clientele at Las Iguanas on the Wednesday night we were there was mixed. I like that it’s a place where someone can go in and have dinner on their own in comfort, and that the cocktail list provides lots of ice breakers for first dates. I think Las Iguanas comes into its own for groups in the evening. It’s a cosy and welcoming space, the staff is friendly and helpful, and they have runners on hand to help get drinks and dishes out to groups so everyone gets fed and watered at the same time. The cocktail list is fun and they have South American and other lagers for beer drinkers.