Isn’t it odd that we associate eating seaweed with Asian cuisine? After all, we have actually used it in this country for centuries, in fact since prehistoric times. It’s time to change that. When you need a savoury, salty touch use seaweed!

I’ve been trying out some samples from Mara Seaweed which arrived with some suggested recipes. These served as inspiration for the two recipes that follow. The first is a soup which simple to make and can be adapted to what you have at hand. The second is bread which is more time consuming – but the results are so tasty! Mara Seaweed are determined to bring seaweed to a wider audience. They have teamed up with Otter Ferry Sea Fish and Scottish Association of Marine Science and is one of 11 groups to win a share of £4 million innovation funding from the UK Government. This will see the team develop seaweed farming facilities to harvest seasonal seaweeds around the Scottish coastline. It already has a license from the Crown Estate to gather seaweed. In 2010 the global market for cultivated seaweed  business that was estimated to be worth US$12 billion. Scotland is well-positioned to meet this global demand with its extensive experience of aquaculture and its unique and varied coastline. Should we think of it as a salt substitute? It has far less sodium than standard salt,  but also benefits from a rich range of minerals, vitamins and trace elements. It has a subtlety all of its own. I suggest using it in the same way we might add a dash of soy or mirin to enhance the flavours. 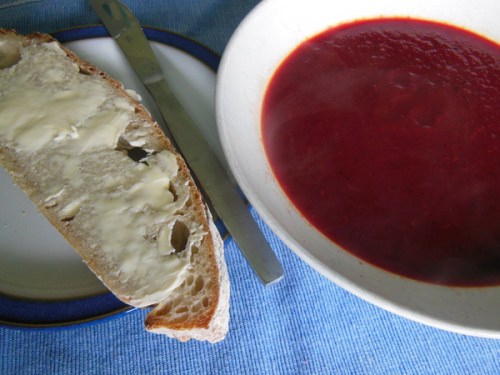 Vegetable soup with seaweed and crusty bread – perfect for lunch Save Print
Preparation time
20 mins
Cooking time
10 mins
Total time
30 mins
My soups are created from what I have in my vegetable basket. You can use practically any combination of vegetables. I always include onion and always omit potato. If you happen to have bought beetroots with fresh leaves on them, add these to the mixture too. If you've not got Mara Seaweed, other types can of course be substituted.
Author: Edinburgh Foody
Recipe type: Starter
Cuisine: Scottish
Serves: 2-3
Ingredients
Instructions
3.4.3177 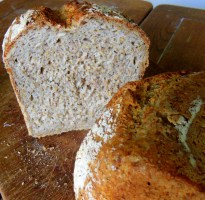 Save Print
Preparation time
6 hours
Cooking time
30 mins
Total time
6 hours 30 mins
This is adapted from Jeffrey Hammelman's excellent Bread book which I highly recommend. It may seem like a lot of seaweed, but it is less salty than standard salt. Don't worry if you don't have all the grains or seeds listed, just keep to the total weight of seeds and grains. Soak the grains and seeds for at least 4 hours. Use a Kenwood mixer or similar with a dough hook for this recipe.
Author: Edinburgh Foody
Recipe type: Bread
Serves: 8
Ingredients
Equipment
Instructions
3.4.3177

Fiona Houston and Alexandra (Xa) Milne founded Mara Seaweed, based in Edinburgh,  in 2011 after researching all aspects of seasonal native seaweeds for their 2008 book Seaweed and eat it. You can purchase Mara Seaweed online or at a growing number of independent stores – it’s even stocked in Harrods. The Mara Seaweed website has loads of fascinating and useful information. I also found LouAnn Conner’s post on Oyster Food and Culture very informative.