What’s in your pasta? Seaweed and crickets.

Caroline and Amy get to grips with two new pasta products which are a tad unusual.

Good things come from the sea. The latest sea treasure to enter my kitchen is I Sea Pasta, seaweed that looks mightily pasta-like. It’s full of fibre, low in calories, rich in iodine (which Amy tells me most women lack) and brings a taste of the sea to any dish. 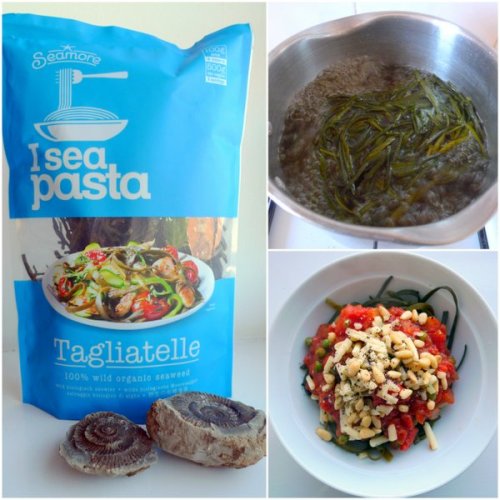 I sea pasta: seaweed that looks like tagliatelle. Here, served straight-up as pasta.

I Sea Pasta isn’t pasta: it’s seaweed. In its dried form, it looks like twigs, tasty, salty twigs. Softened in water, or boiled for 15 minutes, it takes on the appearance of spinach pasta. I tried it three different ways.

One portion (20 grams) of seaweed boiled and served with a simple tomato, onion and pea pasta sauce, a sprinkling of cheese and pine nuts on top. The seaweed was good, the sauce was good. Despite knowing that it was seaweed, the flavour surprised me. I think it was because I treated it as pasta: I need to get used to this product before I can do a plain swap-out.

I reviewed Judy Joo’s Korean Food Made Simple recently. One of my favourite recipes from that book was a seaweed, mushroom and tofu broth. I made it again, swapping out the kelp for a portion of I Sea Pasta, and putting the onion, spring onion and shiitakes in a muslin bag to make discarding all except the seaweed easy. It worked just as well as expected and added some well-needed chew to an otherwise fairly soft dish.

Inspired by Korean cooking, and seriously hooked on a delicious mixture of fermented soya paste, fermented brown rice and chilli paste that apparently has a name, I built a rice-bowl that took only 25 minutes to make and was seriously good.

The special ingredients – the doenjang and gochujang – make a real difference but if you haven’t got them, I can imagine using miso paste and sriracha, or a good dollop of spiced up hummus, instead. Or maybe just a big helping of kimchi.  The sauce needs to be hot, or hot and sour, and sticky rather than runny, so you can dip tofu in it, and then stir it into the rice. (If you’re tired, just boil rice and seaweed then mix with the sauce. A little lacking in veg, but hey, still tasty!) 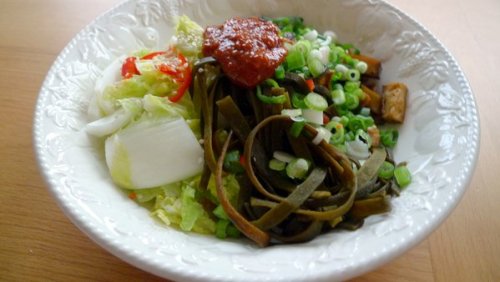 Don’t fancy your pasta with a sea theme? Try it with a land creature element instead. Bugsolutely pasta is made with 20% cricket powder. Yup, we’re talking insect pasta, people – the latest healthy and sustainable superfood. 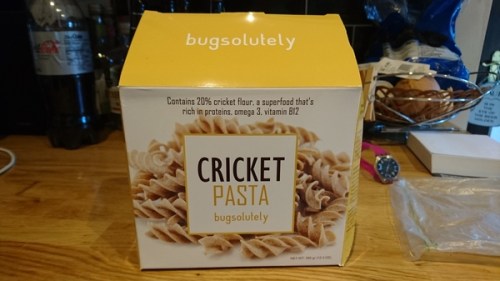 Bugsolutely cricket pasta – coming to a supermarket shelf near you?

Everyone I told about the bug pasta wrinkled their nose and went ‘ugh!’ Yet as the makers of Bugsolutely put it, how different is it to eating mouldy blue cheese or slimy oysters? Both of them are kinda gross if you think too hard about it. Still, understandably the concept of eating insects may be slow to catch on. But if science has anything to say about it, it’s the next big thing nutritionally. The crickets give the pasta a high protein content and are rich in vitamin B12, Omega 3, iron and all 9 of the essential amino acids. Of course, they’re good for the environment too, being less resource intensive than farming wheat or larger animals like cows. 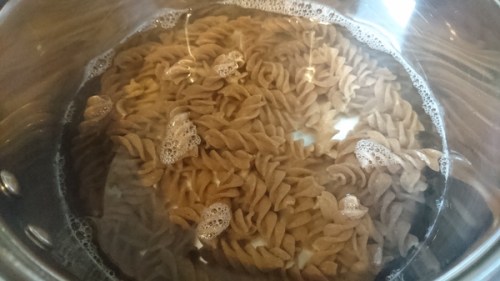 Taste-wise, I think the nicest thing I can say – and this really is a compliment – is that Bugsolutely pasta tastes entirely unremarkable. Dry, it’s very much like ordinary pasta, if a little darker in appearance, like wholewheat, with the odd dark green fleck. No legs, no chirping. Once cooked, dining pal Raymond felt it was a bit floppier than normal pasta, whereas I felt those flecks gave it ‘bite’ – like nipping a flake of pepper between your teeth.

But at only 20% cricket flour, did you really think it would taste insecty? (And would you want it to?) I say, hats off to Bugsolutely for replicating pasta with more “sustainable” ingredients without grossing everyone out with the flavour. 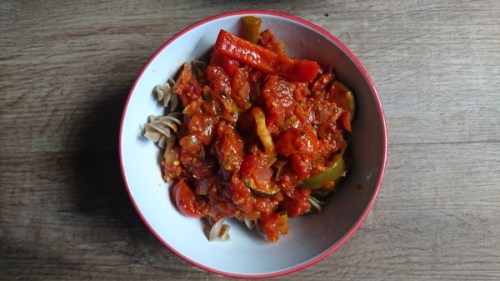 I tried my bug pasta twice, first with pesto and then a tomato sauce. Of course, once you’ve covered the pasta in sauce it could be made of anything! But I did find that the slightly larger, floppier shape held more sauce by surface area, which I would call a pasta win. So would I recommend it? Ab(ug)solutely. It’s good for the environment and an easy health addition to your weekly menu. Give it a go! 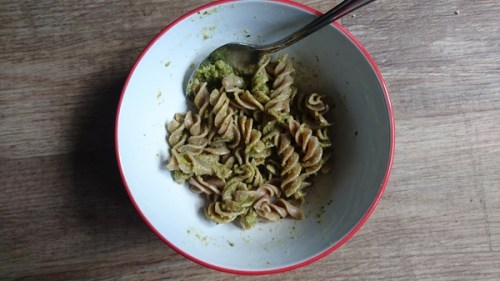 Bugsolutely cricket pasta with pesto. No chirping, all nutrition.

Caroline and Amy sampled each pasta at the companies’ invitation.