The Macallan launched their new range of whiskies a couple of weeks ago, in the Pompadour at the Caledonian. There were whisky cocktails, scrumptious canapés and the main attraction: The 1824 Series. The Series is an interesting addition to their existing range and takes a completely new approach. We’re used to seeing whiskies balanced around an age, but this range is a little different. Taste, of course, is central, but the new range is also very much about colour. 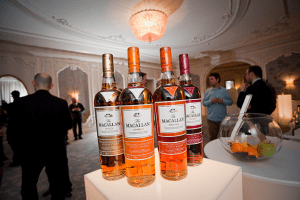 The 1824 Series, as glamorous as its surroundings

The Macallan is famous for their oak sherry casks. It gives their standard bottling a wonderful, deep colour and a sweet, mellow flavour. They’re rightly proud of the colour of their whisky: they don’t add caramel to make it look darker or richer, they use nothing but the natural colour of their spirits. That’s what gave Bob Dalgarno, The Macallan Whisky Maker, the idea to try something new and blend to a specific colour. The results are four new whiskies, or expressions, to use the marketing term. For once, I like the marketing term. Whiskies are expressions of the master blender’s art and imagination. These four illustrate that point. 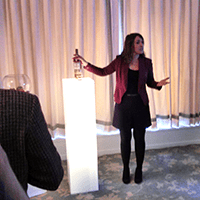 Talking us through the new expressions: The Macallan’s talented taster

The 1824 Series starts with the pale end of the spectrum with the almost lemon-yellow Gold and moves up the colour scale to Amber. Sienna is a mellow tangerine and Ruby is a deep, rich red. Because he’s blending to the perfect colour, using the various casks at his disposal, each issue will have a slightly different flavour. It’ll still taste good, and it will taste as much as the original expressions as it is possible, while getting the right colour. There’s a link between colour and flavour, as it turns out. Whiskies in the very light part of the spectrum tends to have more citrus and vanilla flavours, the darker ones more dried fruit and chocolate. For the EF tasting notes, see below. For Bob Dalgarno’s tasting notes, go to The Macallan website (Gold only, for now.)

Getting Past Your Prejudices 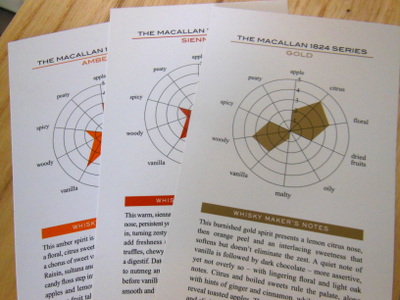 Let me say upfront that I enjoyed three out of four whiskies tremendously on the night, and had my reservations about one. I’ve got samples and look forward to trying them all again. My palate wants different things on different nights so it wouldn’t surprise me if my least fave turns out to be just what I want one night. I didn’t take to immediately to whisky. When I first came to Scotland, I couldn’t stand it. The very smell made me feel ill. Then I worked in The Scotch Whisky Heritage Centre (now the Scotch Whisky Experience) for a couple of summers. It took a lot of experimentation until we found the whisky that cracked it for me: Lagavulin. Blends were too light and sickly, the world-famous Speyside whiskies were too much like blends for my liking and the sweeter whiskies, like Macallan, didn’t do anything for me. Then I tried Lagavulin and fell in love. I smoked Gauloise back then, which might explain why it took such a heavy hitter to get through to me. Lagavulin is still a favourite, but these days I enjoy lighter drams too. Once I’d learned that there were blend and malts, I learned to prefer malts. Then I found out about ageing, and I quickly learned to prefer older whiskies. Sometimes for good reason – Laphroig 10 is rough as tar paper, but give it another five years and it turn into a wonderful dram. – but often just because it’s an easy rule of thumb. Those are the bases of whisky appreciation for many of us: decide to prefer malts to blends, find a favourite area, then go as old as you can afford. It works. But then I became a member of The Scotch Malt Whisky Society and learned to mean what I’d been telling people for years: like what you like and don’t apologise. At the Society, I don’t care about the age of a whisky, I only care about its flavour. Age is an interesting detail about a whisky but it’s no longer part of my selection criteria. Bob Dalgarno explained: “We have been able to work creatively with the full range of matured stock available, rather than working to a pre-determined character based on age. For me, the key thought in this range is that a great single malt doesn’t need to be 30 years old to taste like a 30 year old.” 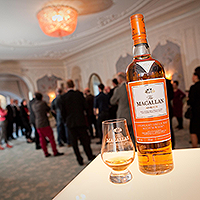 Amber, and in the background, Edinburgh Foody.

Why the personal anecdote? The whiskies in The 1824 Series don’t come with an age statement. An age statement is a minimum age statement so the consumer knows that there’s nothing younger in the bottle. The white spirit, the new make, has to mature in a cask for three years before it can be called whisky, but beyond that, we know nothing about the ages of the whiskies in Gold, Amber, Sienna and Ruby. But it doesn’t matter. A good whisky is a good whisky. Saying that, age is a perceived indicator of quality when it comes to whisky and it might be difficult to explain to nervous whisky drinkers why they should cough up £120 (the RRP for Ruby) for a whisky without an age statement. I don’t think cost will stand in the way of the lighter whiskies who also weight more lightly on your pocket: Gold has an RRP of £36, Amber £45 and Sienna £66. Drinking Ruby is taking a lesson in what’s so special with sherry casks and what’s so special about The Macallan. Sherry oak casks, natural colour. Nothing else is needed and I hope consumers everywhere will see that and snap up The Macallan 1824 Series.

Gold: vanilla, lemon and green fruits on the nose, pineapple and pear drops on the palate. I enjoyed Gold more than I expected to. it was light, cheerful, slightly sweet but mellow and really easy to drink. This is a summer’s afternoon kind of drink. Amber: there was something about the nose on Amber that I didn’t take to, something a little chemical. On the palate, it has sweet vanilla and hits of dark citrus. Others tasted candy apples and toffee, but I didn’t get those notes. I did have a cocktail that used this whisky as its heart and loved it. Called Amber Glow, it was a glossy concoction of Amber, Bols Dry Orange and bitters. Just the type of cocktail I like. One that doesn’t allow you to forget that it’s got bite as well as yum. Sienna: more tempting vanilla on the nose, as well as oranges, and a hint of something like leaf mould. The palate had plenty of gentle dried fruit but also Christmas spices, and stewed fruit with ginger. It’s a perfect digestif. Ruby: cocoa and marmalade on the nose, syrup and oranges on the palate, as well as hints of fresh pine, as well as something almost like smoke. This was a firm favourite with EF, as tasty as dessert and as warm as a hug.

The Macallan Distilleries Ltd Easter Elchies Craigellachie, AB39 9RX Tel: 01340 872 280 Email: Distillery@themacallan.com @the_Macallan   Images courtesy of The big Partnership. (Except for the the one of our talented taster, that’s all mine, with apologies for the quality.)