Sometimes, you come across something unexpected. I met Justine Hazlehurst of Kask Whisky at the Buffalo Trace borboun tasting a few weeks back. Like the other people there, Justine was trade but she doesn’t have a bar or restaurant, and she doesn’t shake cocktails for a living. Instead, she organises whisky tastings and shares news and reviews. We came to talking.

At Edinburgh Foody, we’re interested in and impressed by people who know what they want to do and follow their dreams. Working in the food and drink industry isn’t always an easy option and it can be difficult to come in from other professions and find your own niche. Justine is a teacher by day and a whisky guide by night. It was obvious that Justine was knowledgeable about, and loves, her chosen product, and wanted to see her in action. Imagine my delight when she invited me and C. to attend her next tasting. 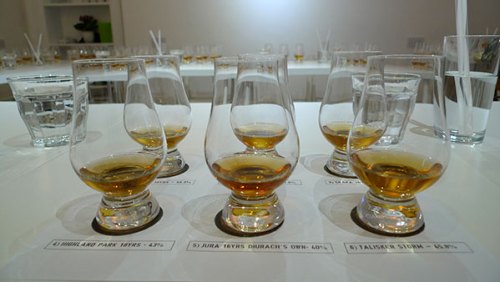 What a beautiful sight! The perfect way to spend a cold Friday night.

If you’ve ever read my posts about whisky, you’ll know how very fond I am of Islay whisky. I like the flavour of peat. A lot. Isla wasn’t one of the one of the islands on the Island Hopping tasting tour and for a couple of very good reasons. Firstly, there’s too much to chose from on Islay, so many different whiskies, not all of them peated although that’s the flavour profile the island is known for. Which one is the ultimate? (There’s a long tasting session in that discussion alone.) Secondly, Islay isn’t the only Scottish island producing top-notch whisky. They all deserve a good outing.

The tasting took place in the front-room of the Hill Street Design House, a lovely, bright white room that could would be a great setting for a small exhibition and is perfect for a busy whisky tasting. The white walls and tables made the room bright even on a cold and windy Edinburhg night. They had another important benefit which Justine pointed out: we could see the colour of the whisky.

It was a full house and we got started promptly. As well as six whiskies to try, we had water to drink, and water to dilute the spirit with. I learned a new way of adding water to your glass: use a straw. I’ve used eye-droppers before, but the straw works just as well, is a lot more accurate than a jug, and is something that’s cheap to get and often to hand.

Justine took us on a brief tour of the whisky producing islands of Scotland and told us a little about why she’d chosen the whiskies we had in front of us. She’s an engaging speaker who knows a lot about whisky and also has a personal connection to the distilleries. I loved that a lot of the photos were holiday snaps, taken by Justine or her friends. It made me want to travel, to visit the distilleries myself, in a way that stock photos or marketing shots wouldn’t.

So, first up on our journey was Tobermory.

A couple of years ago I wrote an article about Mull and Iona for historic Scotland. C. and I spend a weekend doing research which took us to Tobermory. The distillery, to our disappointment, was closed. So even though I’ve stood on the distillery site, this was the first time I tried the whisky. It was pale straw in colour and had a light, ester-rich nose with some sweetness. The palate was warm and lively, with a good bit of pepper. With a couple of drops of water it opens up with citrus and grass, and a hint of something medicinal.

This was C’s favourite and I think we’ll soon see one in the cupboard. The nose was reminiscent of fruity sweets, alcoholic, almost with a hint of vodka. The colour was straw but with a hint of gold, You need to take a good slug as this evaporates in the mouth if you take only a small amount. It’s a tooth-sticking, almost chewy whisky, with hints of ginger. It’s dry. With water it opens up and gives pencil shavings, syrup and pepper. 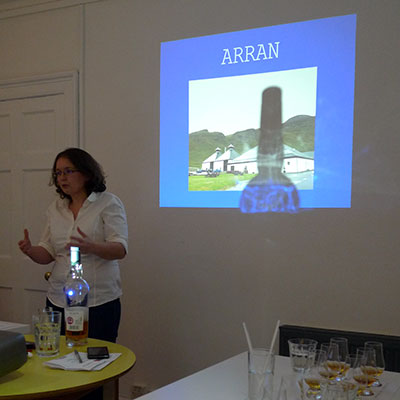 The bottle shadow wasn’t intentional, but I thought it was rather apt.

Scapa has quite a special still, taller than most and thus giving a lighter spirit. This was an interesting malt. It had a huge hit of banana on the nose – I was smelling a lot of esters on the evening, the room were awash in them, all adding to the atmosphere – which distressed C. when I mentioned it. Scents are interesting: we all get something a little different. I got banana, others got fusty pineapple. Scapa is gold in colour, with a hint of green. Tasting it, it has honey and caramel, a hint of soap. It’s a delicate dram. With water, the flavour becomes rounder, a little spicier but also rounder, with caramel and ginger spice.

Once upon a time, C. bought a bottle of this because it was winning all the medals. Then he went away on a long trip and I, not reading the label properly, opened the bottle. Over the next few months, as C. traveled, I finished the bottle. One day, he said something about an 18-year old, and I said something like ‘oops’. We call it Highland Park-gate. Now that he’s finally tasted the delicious liquid he knows – much to my relief – that it was OK. He prefers the 12 year old. Note to self: ALWAYS read the label. 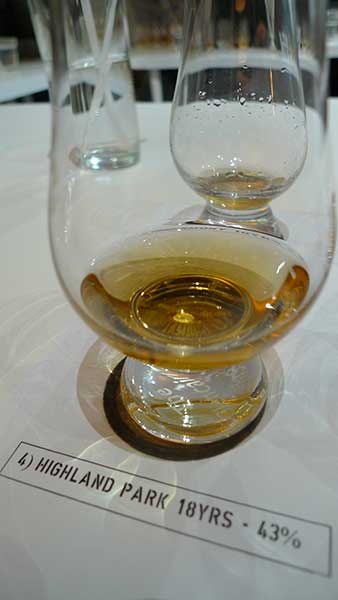 One of my favourite whiskies in the world.

A light amber in colour, this has a hint of tar on the nose, also brown sugar and a clean hint of the sea. On the palate, it is viscous and adds hints of iodine, treacle, the slightest hint of salt and tobacco on the side of the tongue. It has a long smokey finish.

One of the things that makes Highland Park so good is that it’s matured in sherry casks. That also adds to the colour.

I like the standard Jura expression. It is light and salty, easy to drink but with a lot of personality. Diurach’s Own is a dark amber, almost orange dram, much darker than the standard. On the nose, it is full of syrup, orange, Christmas spice, something chemical like pine needles. On the palate, this gives really interesting hints of wood and something almost moldy like leaf mulch or raw cocoa beans, a hint of coffee, and an intriguing almost grapefruity bitterness. That might not sound like a recommendation but it was a really interesting dram.

Talisker knows their market. There’s a travel retail only expression called Talisker Dark Storm which is made by maturing the spirit in extra-charred barrels. Talisker Storm doesn’t go for that dark a tar flavour, but it builds on the standard dram. On the nose, this is big on smoke and iodine, a hint of earth, and an almost sour hint of something, someone suggested wet coals. It is almost syrupy on the tongue and gives a lot more smoke on the palate than the standard Talisker does, but it is not all smoke but has a complexity of other flavours. I got fir needles, barbecue, bacon. It’s complex and sturdy. Water doesn’t do it many favours.

At the end of the tasting, we drank more water and sat and chatted between ourselves. It makes good sense to save a little back so you can come back and taste whiskies again. The first one of the night tends to have a very different impression on your palate four drams in. Exposure to flavours and alcohol changes how our nose and palate reacts. As a special treat, Justine gave us a taste of Marks & Spencer’s Six Isles Reserve, a pale straw malt that brings together malts from six islands. It got Best Blend at a festival in Vancouver. C didn’t like this at all but I thought it was OK. The nose is awful – it reminded me of pure distilled spirit – but the flavour is very different. It is firey, has a hint of tar shampoo and honey. It was a really fun dram to end on.

Interested in whisky? Follow Kask Whisky on Twitter to get her tasting notes, and go to her next tasting. You’ll taste several interesting drams and have a flavourful, entertaining and informative night.