StreetBar relaunches with more than coffee: deli, tapas and wine

A couple of years ago a friend of mine opened a café: StreetBar. With two business partners he secured a unit on Conference Square at what looked like a very good spot. Surrounded by office buildings, with more going up on Morrison Street, they were bound to get healthy business. Then building stopped and one of the companies in the building moved out. Conference Square has changed a lot over the last couple of years. But then, so has StreetBar.

Today, StreetBar is more than a café. It sells coffees, yes, but it also provides deli style lunches and tapas, and transitions into a bar at night.

A tray of snacks at StreetBar. Perfect accompaniments for a bottle of wine.

StreetBar reopened in July with a new look and a new menu. When they first opened, the focus was strongly on coffee and milkshakes. Now, that has shifted to deli foods and tapas. Where before the walls were white and there was a sandwich fridge next to the door, the space now looks like a bar with large blackboard menus on the walls and lit candles on the tables. It’s a friendly and relaxing place. The first week, C. and I visited to try out the menu and share a bottle of prosecco.

The inspiration for the new, grown-up deli/bar came last year. Michael and his business partners had decided to go their separate ways and Michael wanted to make StreetBar a more all-round place. A place where office workers could come for a coffee en route to their desks, but also a place they’d chose to go to for lunch and to relax in the evening. 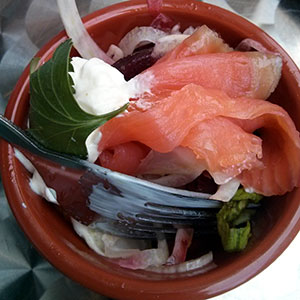 When StreetBar started, they wanted to serve street food: fast and tasty dishes from all over the world. The site they opened in restricts what they could do with regards to cooking, so the focus changed. But even with a very small kitchen, there’s a lot you can do beyond coffee.

To make salads and sandwiches for lunch, you need a deli counter and with one of those, you can do antipasti. The idea grew from there. Small dishes can come from anywhere. StreetBar serves tapas today, but in the future, they could add dishes from other cuisines: Mediterranean mezze, Italian antipasti – there many possibilities. 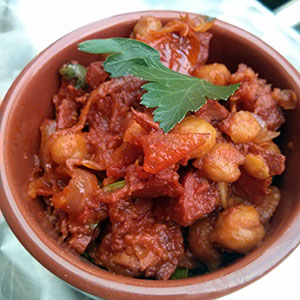 So what did we try? As much as we could! The snack and papas menu have something for vegetarians as well as carnivores. They change regularly so you’ll find something new on the menu when you return. I enjoyed the chickpea and chorizo with sundried tomato – it was a perfectly sized helping of paprika-flavoured goodness. The smoked salmon was also very nice. Rich salmon worked well with the clean, fresh flavour of lemon mayo and fennel that accompanied it. We also had glazed almonds with celery salt (utterly addictive). We also tried lemon marinated olives from the tapas menu. The lemon marinade is made from whole lemons that have been cooked to remove bitterness and to make it lemony without being sour. They were very good. C. enjoyed the vegetable quesadillas and garlic bread with hummus.

To go with the new menu, StreetBar got a license and a range of wines. A friend of Michael’s put him in contact with a great producer and the wine at StreetBar is exclusive to them. I enjoyed the prosecco. It’s a sophisticated, dry prosecco that stood up to the many flavours in the dishes we tried. It’s not all sparkles – as well as prosecco and champagne, StreetBar has a range of whites and reds as well a couple of beers. 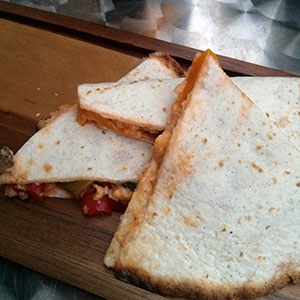 The day we visited, the sun was out and we sat outside until I, always a wimp, got too cold. Sitting outside, watching people leaving the office to go home, nibbling and sipping, was thoroughly enjoyable. When we moved inside, the atmosphere was a little more intimate. We had a brief chat with the staff and finished our prosecco.

I hope more people decide to do what we did and pop in after work for a plate of tapas (or two) and a glass of something. StreetBar’s a nice place to take a break, relax for a bit. Give them a go!

StreetBar offers outside catering and you can rent the space for events and functions.