Blending your own whisky at The Scotch Whisky Experience

As a student, worked summers and weekends at The Scotch Whisky Heritage Centre, now The Scotch Whisky Experience. It was a dream: for three years, I worked as a guide in a whisky museum next to the castle. In that time, I learned first to drink and then love whisky.

Every summer, there would be a new crop of employees, students of all kinds of subjects, but all of us with languages. As well as English, I could tour in Swedish; Paul, Gary and Anne spoke French, Ana Spanish, there were Italian speakers, even one guy who spoke Portuguese. I left in fourth year because I needed to use the weekends to study. It was a hard decision to make and I stayed friends with some of my colleagues. Over the years, I’ve had a couple of great holidays in Scotland going round distilleries with, among others, Susan Morrison.

Susan, already a passionate guide and presenter when we worked together, is now the general manager and director of The Scotch Whisky Experience. I have her to thank for finding a whisky I really liked (passion and patience took us from the lights to the heavy until Lagavulin and I found each other). Last week, I had the privilege to see her in action at a whisky blending, one of several events The Scotch Whisky Experience offers. 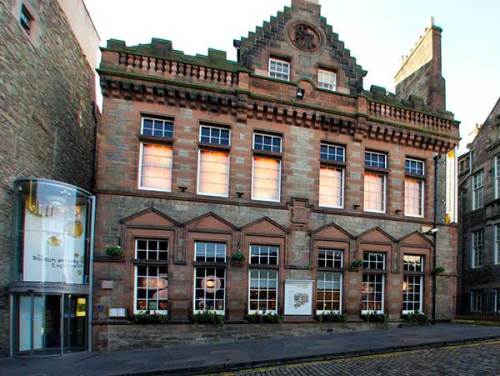 Blending whisky? Don’t you need a really good nose for that? Yes, you do. The format’s is educational and friendly, and, luckily, there is little pressure. It does give you a good idea of the importance of blending and how the process works. All blenders-to-be gathered in the shop, where I ohd and ahd over many pretty and delicious bottles, and regaled C. with tales off how it used to look ‘back in my days’ over a whisky cocktail. (The staff uniforms are a lot classier these days.)

Getting started: scent and taste 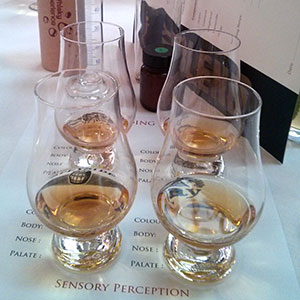 Getting started: the first step is understanding your materials.

We went up to Castlehill Room and sat down a at tables with crisp white table cloths. On them were glasses and bottles of whisky and interesting little numbered bottles. That’s where our journey started. Each bottle contained an essence and we had to sniff them and guess what they were. Two points for the right answer, one for related scents. I got 15 out of 20. (It’s possible that I was a little generous with the scoring. Tar and smoke is the same, right?)

To give us a basis for blending, Susan took us us through four of Scotland’s whisky regions. It was great listening to Susan. She is a really good presenter and has kept her passion for whisky. She told us about how wood types influence the colour of whisky, and the character of different regions. The first whisky we taster was a light, bright lowland whisky – Glenkinchie. I haven’t had Glenkinchie for a long time and had forgotten how pleasant it is, light and citrussy, aromatic with a bit of water. A great summer sipper. The highland whisky was Old Pultney, a richer, sweeter dram that almost fizzes on the tongue.

Representing Speyside was Aberlour, a sweet and rounded whisky with hints of honey and caramel. I’m a fan of Islay malts and was looking forward to the smokier end of the spectrum. We had Bowmore, a lightly smoked, salty malt that makes me think of boats and fishing. It captures the sea perfectly. 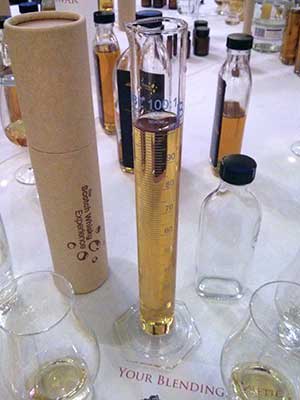 Blending is a delicate matter. There was an eye-dropper – for small quantities of Islay to warm your blend. I didn’t use it.

The last step was to blend. Susan shared a lot of information about how to make a good blend. The base is a grain whisky, between 60-80%, depending on the character of the blend you’re producing. You then layer other whiskies in to get the character you want. After considering what we were trying to achieve, we wrote down the recipe and then we carefully followed it to create our final blend.

I was aiming for a very smokey blend, with a bit of sweetness. Traditionally, Islay whisky makes up only one or two percent of a blend since they are pungent and tend to take over. That was what I wanted so large amounts of Islay featured, softened by highland and a tot of Speyside. C. went softer and lead with lowland. I thought mine tasted great; he wasn’t too keen in his.

After completing the blending process, we went to the Diageo Claive Vidiz Scotch Whisky Collection, a display of thousands of whisky bottles collected by Claive Vidiz, in Brazil. Here C. and I caught up with Susan for a chat. I was enthusiastic about the new look: the Experience was re-vamped a few years back by, incidentally, C’s cousin. Sometimes, the world is small, a feeling I enjoyed in the golden glow of Scotch whisky from Brazil. 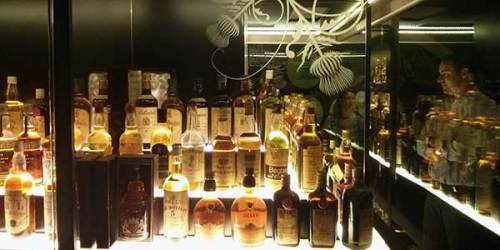 The impressive whisky exhibition: imagine having these bottles – and hundreds more – at home.

We moved on to the McIntyre Whisky Gallery and mingled with the other guests and chatted over cocktails and canapés prepared by Amber, The Scotch Whisky Experience restaurant, before slouching of into the gathering dark. It was one of those soft Edinburgh evenings, warm and misty at once. A hint of smoke lingered in my nostrils as we left, clutching blends and nosing glasses close.

I can’t decide whether to enjoy my blend on my own, or whether to invite everyone I know over to try a tot. Probably the former: it’s a very limited release. 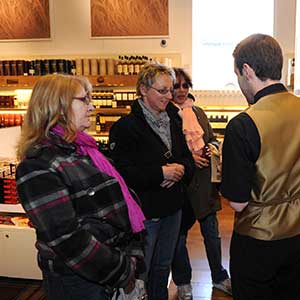 Have a question? Ask someone in the shop. (Photo courtesy of The Scotch Whisky Experience.)

The Scotch Whisky Experience offers informational tours as well as a range of events, from tours and tastings, to whisky courses. The blending experience is for groups of 10 or more and can include a fully guided tour.