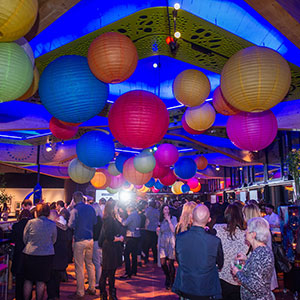 We were standing at the Campbell Brother’s Fish stand, trying seafood salad, smoked mackerel and smoked salmon. Around us, people mingle and chat. Above us, brightly coloured lanterns glimmer. The smoked salmon, soft as butter and richly smoky, didn’t stop us from paying attention to the other produce on offer. ‘The prawn skewers are on the barbecue,’ said the nice man behind the counter. ‘And so are the squid steaks,’ said the equally nice woman. 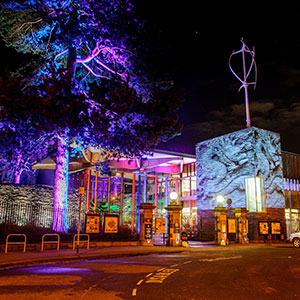 We were in the John Hope Gateway at the Botanical Gardens in Edinburgh, on February 19th, to celebrate Lunar new year. The event was sponsored by Sodexo Prestige Venues who also invited local producers to show off their produce. The Gateway was lit up with coloured lights, bright paper lanterns hung from the ceiling and orchids decorated the tables. People were milling around, browsing food stalls and sipping champagne. My friend and I started our pan-Asian culinary journey with curry, she with lamb and veg, me with salmon. Fish fans both, we then went straight to the Campbell Brother’s stand where we heard about the squid. Our next stop was obvious: the barbecue.

Outside, on the dark balcony decorated with festive coloured lights, three barbecues were cooking a variety of tasty foods. The barbecues were curvaceous and small, like lacquered eggs that sat firmly embedded in the table top. Each was closed to ensure an even cooking temperature and could also be used to smoke foods. As we came out, the prawns came off the barbecue and we joined other enthusiasts in calling for squid.

‘Look at that,’ said the master of the BBQ, showing us an opalescent square of squid, almost a centimetre and a half thick. ‘That came from a giant squid!’ 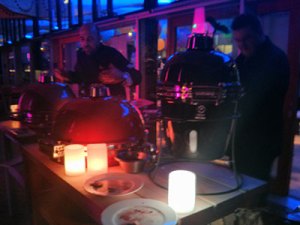 You might not know this about me, but I like squid. A lot. Which is why I turned to my friend and mumbled ‘It’s not. For a start, architeuthis isn’t caught commercially, and if I remember correctly, it tastes of ammonia. Not exactly something you’d eat.’

‘Mm,’ said my friend patiently, ‘I think he just means it’s a big squid.’ ‘But,’ I hissed, ‘he shouldn’t call it a giant squid when it’s not. Giant squid is a species.’ She deftly distracted me from a lecture on the squid species most common in UK waters and their comparative sizes with a luminously green cocktail.

While the squid steaks cooked, we snacked on grilled prawns and a lovely combination of grilled veg, fennel, asparagus and mushrooms. Grilled fennel was a revelation: soft, sweet and with its refreshing licorice tang.

Then came the first of the squid steaks.

It had been grilled for five minutes, four on one side, one on the other to get some charring. The meat was juicy, tender and very flavoursome. The second steak had been in the smoker for a couple of minutes with cognac chips. I had expected the smoke to overpower the gentle flavour of the squid but it didn’t. Instead it lifted it, highlighting the sweetness of the meat. Oh, it was moreish! 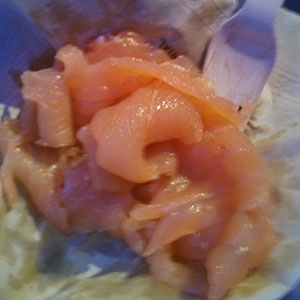 The squid steak might have been my highlight of the evening, but it was not the only great dish that we tried. We had smoked salmon sushi, delicious Peking duck, crunchy vegetable stir-fry and meltingly soft five-spice rubbed slow-cooked pork. All were perfectly cooked and served. We finished our journey almost where we’d started with a final taste of smoked salmon. While we grazed on Asian-inspired dishes made from Scottish ingredients, we were entertained by dragon dancers, watched a tai-chi demonstration, and listened to the guzheng. I even had my surname written with Chinese characters. As well as entertaining the guests, the evening aimed to raise money for a charitable programme, Stop Hunger, that Sodexo runs with a luxury raffle.

As the rain started, we left the Botanic Garden, East and West continuing to mingle cheerfully behind us. We were full of good food and good cheer. What a great way to welcome a new year! 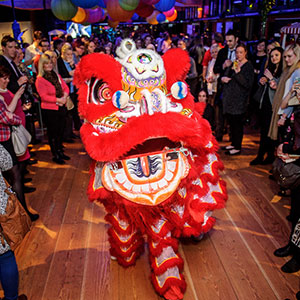 Images of lion dancers, and the John Hope Gateway inside and out, courtesy of Sodexo Prestige. (Blurry photos of food and barbecues are all mine.)