Be in Your Element on Rose St

I rarely eat on Rose St, Edinburgh so the opportunity to visit Element was a chance to see what the city centre restaurant scene is like. Upon arrival the bar was jumping with a lively Friday night crowd; glasses of white wine and high heels intermingled with cask ale pints and rugby banter. Seated in enormous tartan wingbacks in the dining area though, everything was quieter and we felt as stylish and cosy as our surroundings.

The cheerful staff were eager without being overbearing and happy to make recommendations. A large glass of Malbec helped my pal settle after a long week and we were able to consult the menu. From a list of dishes representing current British pub-restaurant favourites we selected salt & pepper squid with squid ink aioli and lime mayonnaise and pan seared pigeon breast with sweetcorn veloute, chorizo and crispy sprouts as starters. 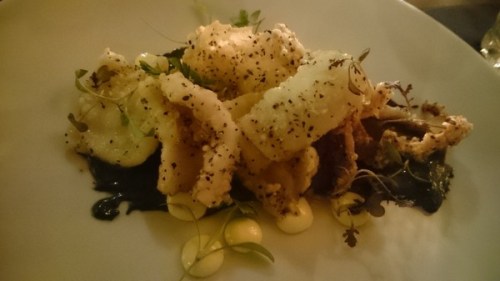 As I’d hoped, the squid’s accompanying black ink and white mayo (soon combined into a slate-grey) was an aesthetically pleasing colour contrast. I didn’t get a strong sense of garlic or citrus, but as an accompaniment their zing cut through the meatiness of the delicately battered and lightly seasoned squid. As £6 starters go, getting a whole squid isn’t bad going, especially when his (or her) legs are delightfully crispy and his (or her) body is chewy but not rubbery.

The pan seared pigeon breast was also cooked very well, arriving a rosy pink hue and delivering a succulent gamey taste. The veloute was thick, like a puree, and very sweet, interspersed with salty chorizo chunks, their edges charred, and dark green sprouts, an earthy reassurance on the base of the palate. 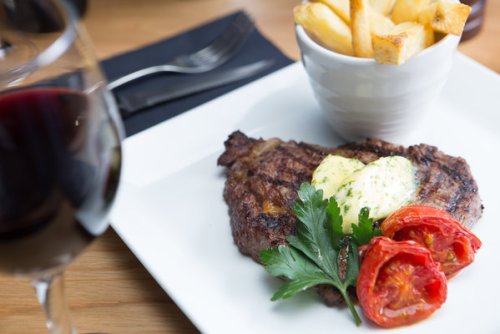 Whilst I can’t offer you a definition of chophouse butter, I can tell you the steak arrived slathered in herby discs of it, glistening and melting, as if it sweated the stuff. I’d asked for the steak medium rare and indeed it was; firmly seared at the edges and baby pink in the middle. Apart from a few unwelcome chunks of fat (hard to spot by the sole candle lighting our table) it was a nice piece of meat and overall it was part of a well-balanced plate. The tomatoes were sweet, the salad light and fresh and the chips chunky with a crisp exterior and fluffy interior. More than a few were pinched by my dining companion; testimony to their tastiness. 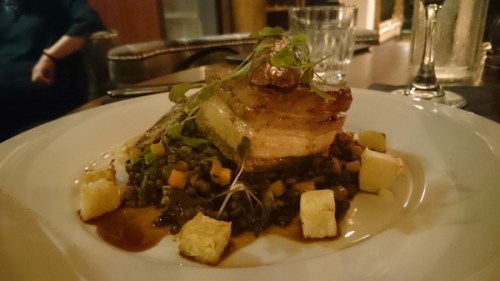 Meanwhile, aforementioned pal’s pork belly was a serious bit of piggery. A huge slab of it sat on top of a very hard and crunchy slice of fat, but inside it was soft and melty. On top, the fat was a little easier for normal teeth to engage with and failing that, the large amount of lentils had absorbed all the jus, forming a savoury paste. The accompanying fragrant celeriac cubes were a good contrast in texture and flavour whilst the fat sausage, sliced lengthwise, was a pleasantly herby experience, if a little surplus to requirements.

We certainly enjoyed our meals and the genial atmosphere of Element, but two tiny niggles deserve mention. Firstly, we found everything to be very salty. Whilst the waitstaff were forthcoming with water, overall it detracted from the dishes’ flavour. Secondly, portions were very generous, so plan accordingly. We didn’t even have space for pudding after a digestive pause, which meant we missed out on the whisky & Coke sticky toffee pudding with clotted cream. Tempting enough to return? I reckon that’s the element of success.