It’s always a bit of a challenge eating out during the festival.  You’re either trying to work out whether you can fit a decent meal in between shows or are reluctant to try somewhere as it will be overwhelmed with all the visitors in town. We ended up with a booking at a very precise 5:45 pm as the table had to be back at 7:15. Having  just seen the Korean show Chef (think kung fu mixed with beat box) we were ready for a delicious meal.

Ondine prides itself on its fish.  The restaurant is located on a corner of the block that now includes Hotel Missoni and could be mistaken for that hotel’s restaurant. On the first floor, it’s a pleasant space, with if you are lucky, a view over the crowds on George IV bridge and Victoria Street.

The menu is simple and emphasises Ondine’s dedication to sustainability. We decided to go for a starter, then share the roasted shellfish platter and finished with dessert. 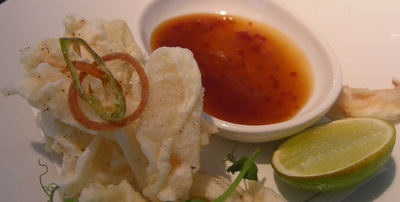 I did hesitate before having the tempura squid with Vietnamese sauce – this is something that can be done well, but equally very badly. The squid was not rubbery, but the tempura really did need to be crisper. Mr EF’s dressed crab and walnut toast was pleasant.

Our roasted seafood arrived: razor clams (spoots); mussels; clams; langoustine; half a lobster.  The garlic butter was unfortunately underneath all the crustaceans – after asking for a spoon to get some of the sauce out, we fared better.

It was fine, nothing special, just fine. Much of the fish all tasted the same, I was hoping for something zingy to show off the ingredients. Could the fish have been just that bit fresher?

Desserts were again okay – a smallish sliver of treacle tart and a vanilla cream and raspberries (rather like a pannacotta). The service was pleasant and attentive,  not formal.

However, although not located in the hotel, it all smacked of safe cooking.  Should we just put it down to festival pressures?   It’s a great concept, but does need stepping up a notch. We won’t be rushing back.