Do you know where your olive oil originated?

Is your olive oil really from Italy?

Did you catch the Food Unwrapped programme on Channel 4 recently? Members of the specialist food piracy branch of the Carabinieri (police) in Italy were featured. Bottles of extra virgin olive oil from well known and own brands bought in our supermarkets were tasted and assessed. Several were highlighted as not pure extra virgin oil. This was confirmed later by scientific analysis. Stories of similar occurences have been reported in France and the USA.

The first crop of olives from Carmelo’s trees in Sicily

Just what is extra virgin olive oil? Simply, it is the first cold pressing of olives and should have an acidity level of less than 1%. What is being sold to us instead of the real thing? Some tests have found completely different oils added to the olive oil, such as safflower. Other tests identified olive oils produced outside Italy.

Prof. Maurizio Servili, from the University of Perugia, tested the chemical make up of Italian extra virgin olive oils over 5 years and concluded that “The sensory characteristics of some Italian EVOOs (Extra virgin olive oils) can be considered unique and difficult to reproduce in other olive-growing areas in the world.” A little like identifying a person by his or her fingerprints.

Olive oil is a mono-unsaturated fat which underpins the so-called “Mediterranean diet”. There are pages of medical journals are full of studies on the health benefits of olive oil. Amongst the list of ailments that can be avoided or improved by a diet that features olive oil are heart disease, diabetes, Alzheimer’s and cancer. 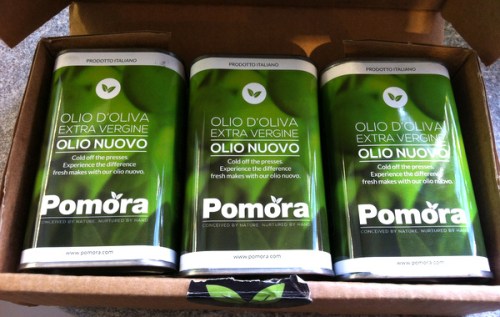 One way to be absolutely sure of your olive oil’s provenance is to get it direct from the supplier. DemiJohn usually have a couple of single estate, personally sourced olive oils ready to taste.  Another rather lovely idea is to support an olive oil producer by adopting an olive tree! Pomora allow you to do just that. You can even go and visit your olive tree! 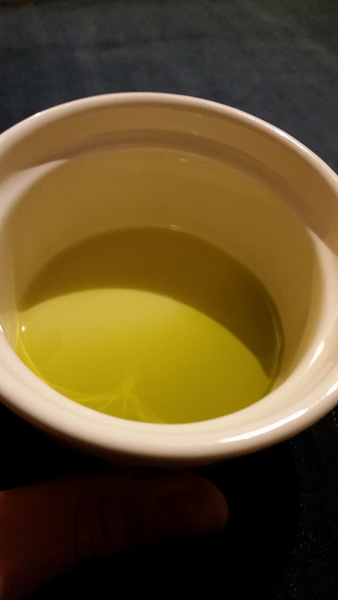 We tasted the Olio Nuovo – new oil, bottled straight after harvest. You choose your farmer and pay £29 per quarter to receive olive oil from your adopted tree and updates from your producer. Each quarter you receive a different pack Winter: oilo nuovo; Spring flavoured oils; Summer: extra virgin olive oil and Autumn, 3 different flavoured oils.

The olive oil has a good colour, viscous and is excellent for dipping, salads, drizzled on fish or meat etc. (I also tried it on vegetables once baked which it really enhanced). It is definitely not one to cook with that’s for sure. It has a very rich texture, almost decadent and very flavoursome, pungent even. It’s more golden than an Extra Virgin Oil. 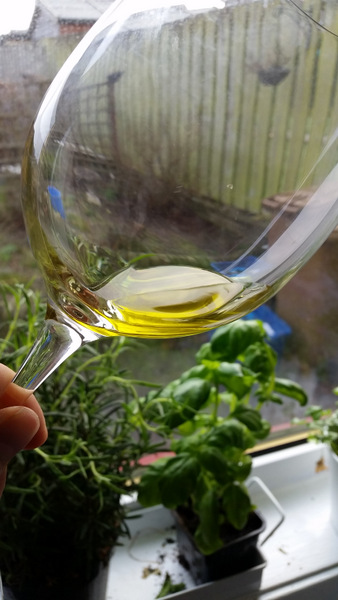 The oil has a gorgeous colour

It’s an excellent product and it is great to be supporting independent farmers and to feel invested in their future by adopting a tree. The subscription of £29 per quarter provides a steady cash flow for the producer. You can also “foster” a tree, buy investing for 1, 2 or more quarters rather than the minimum 2 quarter subscription. Yes, you can buy oil cheaper, but you pay for the best – Demijohn’s oil is dearer still.

How to taste olive oil

Like fine wine, the flavour of olive oil is affected by many factors including the variety (type of olive), growing conditions (soil, climate), crop maintenance (irrigation, pest control), ripeness at harvest and production methods. Try this with some standard extra virgin oil and the best you can buy (or have adopted!)

These steps will allow you to judge the oil’s fruitiness, bitterness and pungency.