Are you eating salmon this Christmas? It seems that more and more of us are doing so. Whether it is smoked or fresh, the chances are that it came from one of Marine Harvest’s farms. About 60% of the world’s salmon is farmed and most comes from either Norway, Chile, Scotland or Canada and Marine Harvest is the biggest producer. I was invited to discover how salmon are farmed today. 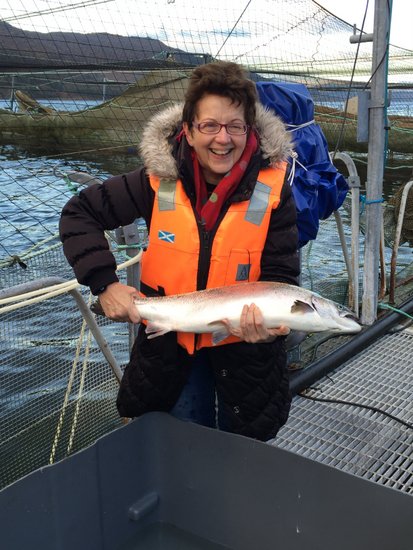 This salmon was trying its best to get away

We picked a glorious autumn day – you could even see the top of Ben Nevis. In such weather you’d soon think that this was the most idyllic place to work. Our day started at the stage where the young fry are raised in Loch Shield at Glenfinnan. They are just a few centimetres long but are already quite hardy.

We donned safety gear, sploshed through the disinfectant bath and onto the boat. Poor Angela, from Scottish Salmon Producers Association spent the rest of the day sockless as alas her pair of wellies had sprung a leak. 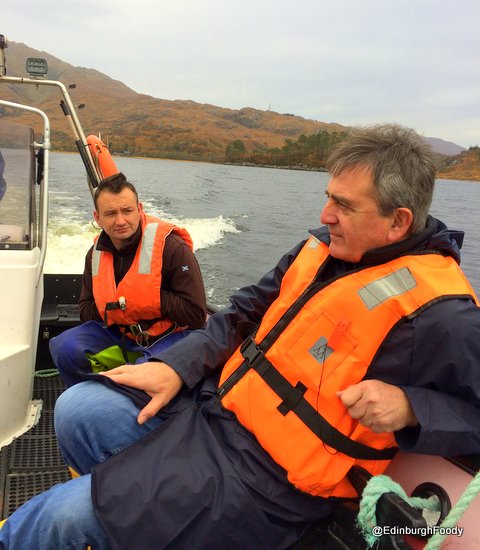 Heading across to the freshwater fish farm

The pens need to be situated in a deep part of the loch. Amazingly, the data on the depth of the lochs was determined more than 100 years ago. Between 1897 and 1907, Sir John Murray took 60,000 soundings of 562 major Scottish lakes. You can see the maps created by John Bartholomew from the data in the National Library of Scotland. 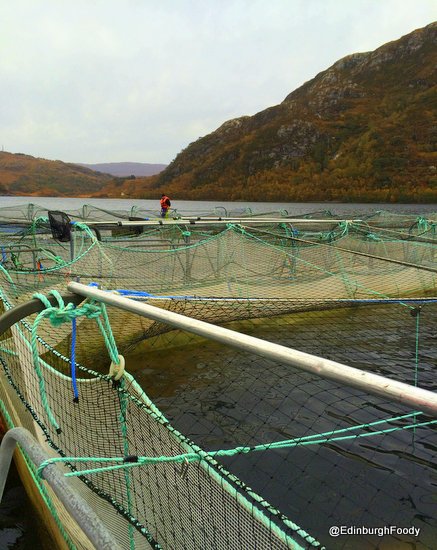 The depth of the loch means the pens are not located in the closest access point. We head across the loch, looking back you can see the Glenfinnan viaduct featured in the Harry Potter films, to take a closer look. The fish continually flip out of the water and never seem to cease moving the pens which are enormous – some 5 metres deep. There’s a swoosh as feed is distributed evenly in the pens. It’s such a calm location.

Once the salmon have reached sufficient maturity to transfer to salt water, they are moved into transport pens and moved slowly over 3 hours to the other side of the loch. At the side of the loch the fish are placed in tankers and driven to their next destination, a sea loch.  We’re following on the journey they would take.

After a short ferry crossing across Loch Linnhe, we drive along a long, often narrow road to Laga Bay on Loch Sunnart. The people who work there make the journey from Fort William each day around 45 minutes. You can imagine the difficulty when it is snowing.

By this time, the wind had got up and the sea looked rather choppy. I was a little fearful. We get into a sturdy boat and head out to the farm thumping over the waves. By the time we get over to the other side, the winds have calmed. We’d seen the feed given to the fry on the fresh water loch. The pellets were small. Here with the fish nearly mature the pellets were huge. An amazing 15 tons are fed to them each day. 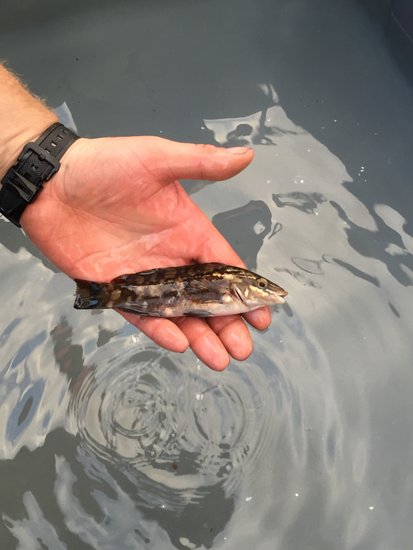 The wrasse clean the sea lice off the salmon

You’ve probably heard that sea lice are a big problem for farmed fish. Here, something really exciting is happening. Rather than using any chemicals, wrasse fish have been introduced to the pens. These beautiful little fish, only about 15 cm long amazingly “groom” the salmon eating any lice that form. At just a fraction of the size of the salmon it’s amazing how they keep up with the salmon which are extremely speedy. Experiments are going really well. The wrasse have their own hides and are fed their food differently to the salmon – after all if they eat all the sea lice, they need something to get them going!

The salmon are always monitored when feed is distributed to minimise waste. As soon as they appear sated, no more food is given. 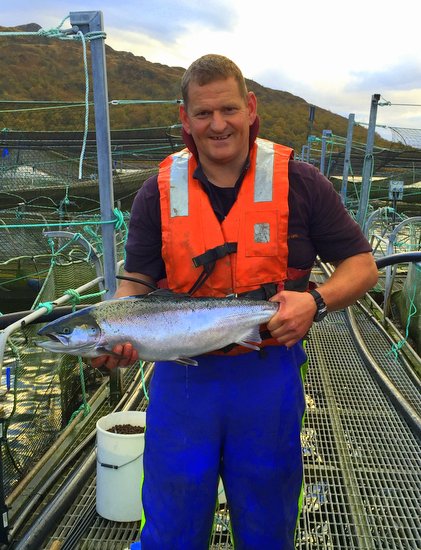 The expert makes it look easy!

I was asked if I’d like to hold a fish. After some effort one is caught at random. It is a beauty, some 4 kg and about a year old. Imagine a very wriggly toddler and you’ll have some idea how hard it was to keep hold of the fish. As you can imagine it was not too happy being out of the water!

When they have reached optimum size, they are shipped live by well boat (a boat with a tank that the fish are stored in) and are taken to the Mallaig harvest station. Here they are harvested and then transported by tanker in an ice slurry to the processing plant in Fort William.

We make reluctant farewells and head back along the windy road back to the ferry. 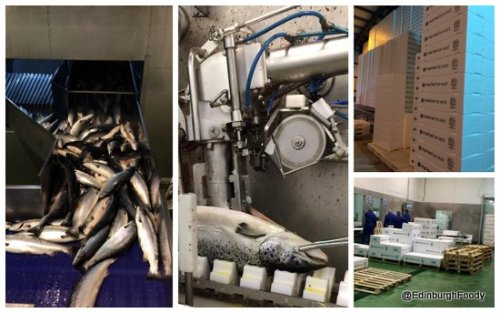 Processing in 5 minutes -entry, removing the guts, ready to ship

The speed that the fish are processed is astonishing. It takes just 5 minutes from delivery to go through all the steps and into the packing cases. There’s a machine that takes the guts out but there’s alot of manual input. The insides are washed and inspected to ensure there are no issues. At another point, the fish are graded before they drop automatically into boxes. It’s noisy, busy and very ordered.

The Chinese are very fond of the really large fish – anything above 6 kg. Amazingly, the fish could arrive there within 3 or 4 days. The French take a large percentage of all the salmon produced by Marine Harvest in Scotland. Whilst we were there, fish were being processed to be supplied under Label Rouge – France’s high quality label.

At a third stage, they are inspected again before final weighing and as these were Label Rouge fish, each fish had the quality mark sticker applied. Whilst many fish are packed into 22kg boxes on ice, more and more are packed into large bins many times that size filled with slush for easier processing by the end customer. Much of the fish is then shipped via Grimbsy to its final destination.

At every step, there was a huge amount of passion from everyone I spoke to. There’s a recognition that far back, farming was not as it should be. With initiatives including introducing the wrasse and working on alternatives to the fish food fed to the salmon (growing algae looks a possibility), this is an industry that is growing and growing well.

When you’re eating your Christmas lunch, just think about all the steps it took to produce your salmon!