Real Bread week (14 to 22 May 2016) is all about celebrating a true unadulterated loaf of bread. We hope it will encourage you to seek out bread made by artisan bakers in your area. You might find that your children are involved in a bread baking class. Or you might like to try bread baking yourself by taking a class. I’ve been reading some new bread baking books – on sourdough, an updated edition of the Baker’s Apprentice and even one for 2-4 year olds! 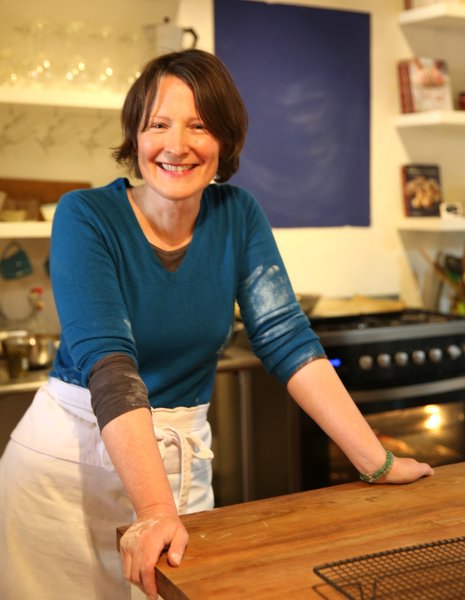 When I attended Richard Bertinet’s course, he was adamant that we learn bread making techniques before we tackled sourdough. I agree with him wholeheartedly. It is not the easiest type of bread to make and you do need patience and time. You could feel you have failed before you have begun.

You will really enjoy Jane Mason’s book. She is pragmatic and down to earth. None of the throwing starter away as you make it. (She puts this down to her German mother: “Waste not, want not” – Plenty of toast eaten in her house). This never seemed to make sense to me either. It’s full of helpful tips such as making the bread in a tin so you can more easily tell when it is ready (it reaches the top of the tin). If things do go wrong with baking, there photographs showing typical problems and why they happened. Jane Mason is a writer, baker and social entrepreneur. She set up Virtuous Bread to help people (among other aims) set up a home bakery. 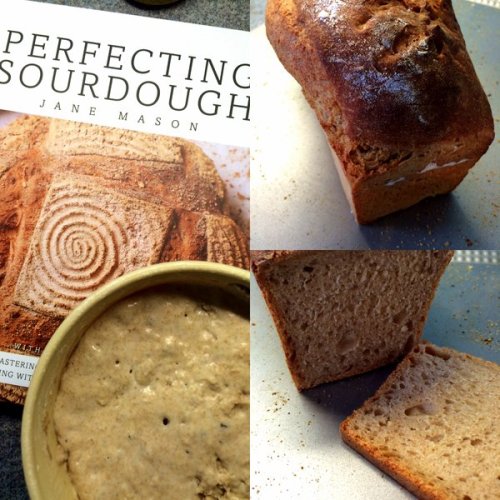 Most of all, I really enjoy the range of breads included. Whilst there are loaves that you would recognise as classic sourdough – plenty of aeration – there are breads like Finnish Rye which I made, which is just perfect for sandwiches, but that have a denser crumb.

Perfecting Sourdough by Jane Mason, published by Apple Press (£14.99), is out now.  Available at QuartoKnows.com Try the Finnish Rye recipe

Definitely a book for would be sourdough bread makers!

Do you enjoy baking with your children or grandchildren? I certainly do. Making bread with 2 to 4 year olds is a messy business, but so rewarding. There’s nothing better than the child eating bread they’ve made themselves topped with their favourite spread.

Caroline Baxter’s book is about Mrs Betsy Bear’s baking school located in a forest. On each day of the week eager bear bakers set out to learn something new. “On Wednesday the bears learn all about bread-making. They mix flour and yeast, Kneading and shaping”. Miss Betsy even insists that all the bread should be the same size. (The author must be a bread baker ..).  It’s a lovely book in rhyme which is sure to delight. It includes a bun recipe (which is cake rather than bread, but if it gets the kids baking ….!)

There are two great “bread manuals” both written by American authors – Jeffrey Hamelman’s Bread (2004 and updated in 2012) and Peter Reinhart’s Bread Baker’s Apprentice (2001). Peter’s book has become a “bible” for the serious bread baker, indeed whole discussion groups are dedicated to it. After 15 years, he’s continuing to refine the recipes and strives, always, to create a better bread.

If you can wait until the launch of this Anniversary Edition in September, it will be well worth the wait. I was lucky enough to review a preview copy. Rather than completely revising the photographs and recipes, Peter Reinhart has enhanced and amended. He’s revised his approach to making sourdough acknowledging what he’s learnt from the strong home baker community. Where he’s tweaked a recipe an explanation is included and the stretch and fold method is introduced for the first time. This is a good book for someone who wants to extend their knowledge and understanding of bread making covering such useful topics as hydrdation and bakers’ perecentages.

I am looking forward to trialling these recipes over the coming weeks.

The additionl of malt syrup gives this dense rye loaf a rich, golden colour, but the white flour means it still has a fluffy texture. This is a daily bread in Scandinavian countries. 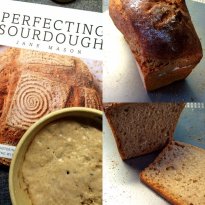 Save Print
Preparation time
9 hours
Cooking time
40 mins
Total time
9 hours 40 mins
You will need some rye sourdough starter for this recipe. You need a 500 gr loaf tin. Placing the loaft in the tin makes it far easier to tell it is ready. A shower cap makes an ideal cover for the bread whilst it is proving but a plastic bag will do equally well.
Author: Jane Mason
Recipe type: Bread
Cuisine: Scandinavian
Serves: 1
Ingredients
Instructions
Day 1
Day 2
3.5.3208

If you’ve an interest in bread – you don’t necessarily need to be a baker – support the Real Bread Campaign. Yes it is easier to find good real bread, but there’s still plenty of work to do!  It cost less than £2 a month. Why not sign up now – there are plenty of benefits.