Korean Food Made Simple by Judy Joo: hot and fresh

A couple of weeks ago, all I knew about Korean cooking was that it involved kimchi and pretty noodle bowls from Heathrow T5. Now, I’ve read and cooked from Korean Food Made Simple by Judy Joo and know more about Korean cooking. I’ve also got a new favourite dish. 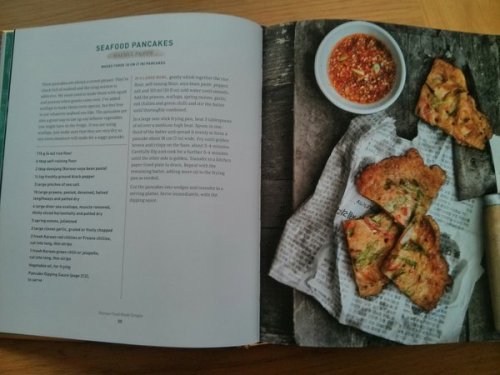 Judy Joo’s Korean Food Made Simple has beautiful photographs from Korea, a good introduction to the Korean larder and recipes divided into sensible sections: the first one is on kimchi and pickles, the last one on drinks. Between, we have small bites, vegetables, rice, noodles, soups, meats , sauces and even bread. Korea doesn’t have a tradition of yeast baking the way we do in the west and the bread chapter is a good illustration of Judy’s approach to cooking. She takes her Korean heritage and mixes it up for a new audience. The book offers both traditional recipes, and American-style food that has been given a Korean twist.

Korean recipes do use ingredients that are probably not in your larder: kimchi, for example, Korean soya bean paste and chilli paste, seaweeds and perilla leaves. I found that my local Chinese mini-market, a fairly small shop, had most of what I wanted: kimchi, buckwheat noodles (a firm favourite of mine), doenjang (fermented soya paste), dried kelp, rice flour and rice cakes. I already had sesame seeds, soy, chilli flakes and toasted sesame oil as these are standard ingredients in my larder. 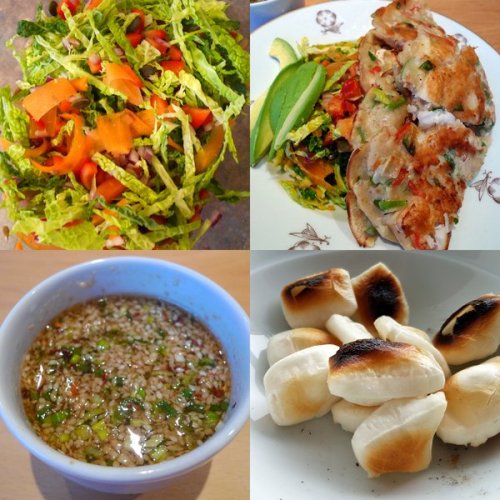 I was curious about the doenjang and opened it the moment I got home. If you can’t find it, it can be substituted with miso although they are not identical in texture or flavour. Doenjang packs an impressive flavour punch: it’s a little funky, very salty and less smooth than miso (or at least, the one I got was). It has an odd flavour and I found myself coming back to it, trying another small spoonful, reeling from the saltiness, then forgetting and coming back again. I can see myself having a lot of fun with this new ingredient. It’s instant umami with a lot of personality.

When the vegetarian is away…

The first recipe I wanted to try was the seafood pancakes. I’ve had various Asian fish cakes before and am intrigued by the flavour and texture. Where a British fish cake is soft and potato-fluffy on the inside, a Thai fish cake, for example, can be almost rubbery in consistency, with a more pungent, fishy flavour. The Korean pancakes are egg-free and I wondered what they would be like.

They’re simply wonderful. With a crispy outer and a soft and chewy inner, they are a pleasure to eat. The flavour is full and rounded, the dipping sauce served on the side hot, sour and sweet all at the same time. I was so impressed that I made a vegetarian version, substituting fish and prawns for boiled rice cakes and finely chopped mushrooms. It worked really well! The rice cakes are slightly chewy and flavour-neutral and I added a little extra soy paste to make up for them. The doenjang turned out to be a dominant flavour so the veggie pancakes didn’t taste all that different from the seafood ones. I’ll be making this a lot, with and without fish, because they’re easy to make and very satisfying to eat. 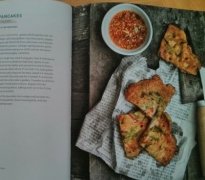 I might be a superfood sceptic but I love a good salad. The superfood salad delivers colour and crunch, and has a very intriguing dressing based around a carrot. The dressed salad looks vibrant and tastes great. It’s makes a lunch box look positively virtuous, even with a couple of good pancake wedges on top.

It’s important to me that recipes can be adapted: miso can be substituted for doenjang, cabbage can be substituted for kale, sake for mirin (because yes, I have sake in my cupboard, but I don’t have mirin). Judy Joo’s recipes are flexible. Once I understood what role a particular ingredient plays, I could swap it out. It’s not kale season at the moment, so my superfood salad was made with finely shredded savoy cabbage instead (And, the second time I made it, with a mixture of savoy cabbage and spinach). I’m looking forward to making it with kale or kavolo nero later this summer.

The dressing, which uses doenjang to great effect, is delicious on its own. I could eat it with a spoon.

As well as a salad, pancakes and fried fish, I’ve tried the soft tofu and vegetable stew, a hot and soothing good-for-you almost soup that’s satisfying and fresh. I haven’t cooked any of the more Korean-with-a-twist recipes yet. I will make the New York cheesecake at some point, and for carnivores, there are a lot of great chicken, lamb and steak recipes. 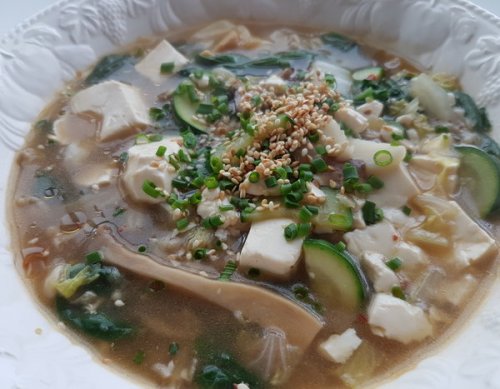 Soft tofu and vegetable stew: soothing and hot at the same time.