Scones: in search of the perfect recipe

To me, the scone is the quintessential British baked good. I grew up making them – with too much flour, kneading the dough thoroughly and throwing it up into the ceiling to see if it stuck. If it did, I considered it done. (This was in my early teen, when I made scones after school. Years later, when the butter marks on the ceiling darkened and became visible, I found myself answering some awkward questions from my mother.)

Then I came to Britain and my idea of what a scone was changed.

I had no idea you could put raisins in them (and am not convinced this is a good idea), or stuff them full of other things. Cherries work, and cheese is excellent. The savoury scone was a revelation and for a while I made my own with leeks and blue cheese. Lunch in a bun: very good.

My favourite is a plain scone, one with a light crumb, a golden crust, and a flavour rich enough to be good without cream and jam. I’m looking for the ultimate recipe. Here’s what I’ve tried so far.

The search for the ultimate scone is ongoing. By trying a range of different recipes, I’ve come to a couple of conclusions about what I like in a scone:

Below is a list of some of the recipes that I’ve tried. The search continues: I have yet to find or construct the ultimate scone recipe.

Darina Allen’s book is a great source of traditional methods. It has several recipes for scones, the one I tried was based on a white soda loaf. It’s simple to make – only three ingredients – and comes together quickly. I like the resulting rolls, but they do not have the flavour I associate with scones. That flavour, I have come to realise, is butter. These are great with soup and bread and just about the fastest rolls I can think of. They didn’t need the full time in the oven so came out a little darker than expected.

Lily’s scones from How to be a Domestic Goddess

Nigella Lawson’s scones had the best rise out of the lot, these looked amazing! Unfortunately, they didn’t taste great: the fabulous rise was due to an over-sized helping of cream of tartar. There wasn’t enough reagent to cook it all off so they tasted strongly of chemicals. I don’t know whether I misread the recipe or something else went awry. This is exactly how I want my scones to look, I like the almost-split in the middle that makes them oh so easy to pull into two jammable halves. 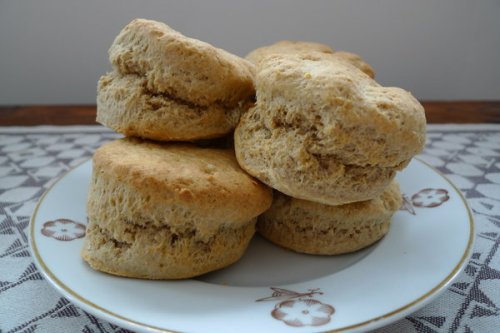 Scones the Nigella way: look at that rise!

Tim’s scones from Cooking for Nerds

Jeff Potter’s was the first scone recipe I tried that had sugar in it. I was a bit perturbed by that, but my results with recipes in this book have been good so it was worth a go. The crumb is beautiful and the taste not bad. I could do without the sugar and the dough was so wet that the resulting buns looked more like rock-cakes than the high-risen, flat-top scones I like. Right in many ways, but not perfect. 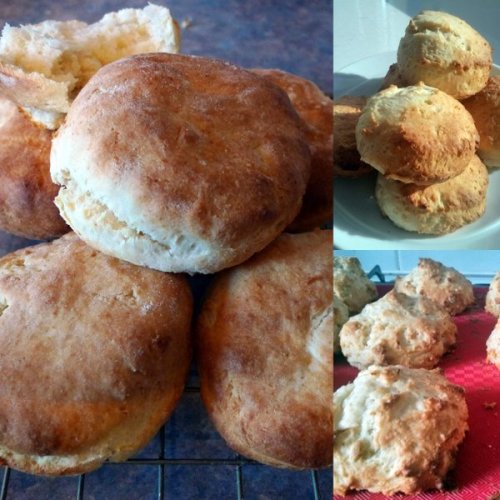 “Every woman needs to know this recipe” said a click-bait header for a YouTube video. I bit. I made. I was disappointed. The idea is appealing: three ingredients, one mixing bowl, off you go. The problem is that the three ingredients are self-raising flour, cream and lemonade: not ingredients I tend to have at home. Again, this is a very wet dough so the scones were not as neat as I’d like to see them. The crumb is a little too tight and sticky, the flavour doesn’t say scone to me. Cream is not a butter substitute.

This is the recipe I grew up with and still one of my favourites. I’ve adjusted it so I make it with kefir (always in the fridge, unlike buttermilk) and I keep the dough a little wetter than I would as a youngster. I no longer test its done-ness on the ceiling. I cut rounds and roll the dough out quite thick. I get a decent result.

The search for the perfect scone continues. I’m intrigued by Mary Berry’s recipe – it contains eggs and sugar – and want to try the Observer’s best ever recipe as well as one of the fancy ones in the Milk Marketing Board’s cookbook too. While I plan what to try next, I’ll work my way through the scones in the freezer. With a nice cup of tea.