We’ve written about, and cooked with, Adagio Teas before. When they launched a range of flavoured matchas, I was keen on trying them. Matcha is the fine powder, green leaves dried and ground, that’s used in tea ceremonies and to flavour and colour all manner of foods in Japan.

The first time I had matcha was maybe twleve tyears ago. A friend of mine had returned after two years in Japan and performed a mini tea ceremony. I had never had anything quite like it. It was frothy, green, scented with freshly cut grass and had a caffeine kick that made my eyes bug. It left me breathless, giggling. Not the Zen experience I had expected.

I don’t know if everyone has the same reaction matcha as I did the first time. I didn’t drink coffee back then so the caffeine gave me more of a hit than it would now I’m a seasoned espresso quaffer.

Adagio’s flavoured matchas are gently infused with flavour, almost more scented than flavoured. I decided to try the raspberry and mocha flavours.

More than tea and water

The traditional way to make matcha is to whisk about a teaspoon of matcha into half a cup of hot water (about 75C). Then drink, immediately. Good matcha is light in flavour, fragrant and fresh. There’s a trick to incorporating the tea without getting lumps: the traditional bamboo whisk really helps, but I do a good job by mushing it into a paste and stirring vigorously while adding water. Matcha latte is becoming popular in coffee shops. It is a little more forgiving (especially if, like me, you have a latte whisk or a latte attachment to your coffee machine). 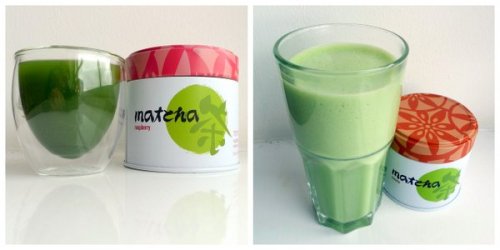 Matcha two ways: as a shot and as a soya latte.

I made a mocha matcha latte and showed the mint-green, super-frothy concotion to C:

‘Ew, what’s that?’
I push the glass towards him and C. takes it, sniffs it, has a sip.
‘That’s really nice,’ holding the glass close, ‘what is it?’ Another sip.
‘It’s a matcha latte.’
‘I would drink one of those.’ Returning the glass with a hopeful look.

Unfortunately, I’d used the last of the soya milk and wasn’t sharing. Soya milk and matcha really works and the tea stays suspended in the milk longer than in water. It makes for a gentler, less startling drink.

For the raspberry matcha, I stick to water. The slight acidity of raspberries would be completely lost in milk. I like to stir the tea then let it stand so the granules sink a little before I drink it. The grass-green liquid is deliciously fresh and fragrant. (It now replaces my three o’clock coffee at work.)

In Japan, matcha is used as a flavouring in everything from ice cream to mints and mochi. Mochi is a confection made from glutenous (also called sweet) rice flour, sugar and water. Traditionally, it’s stuffed with sweetened red bean paste. When Adagio asked me if I wanted to try their matchas, I jumped on the chance partly because of my love of mochi. I fancied making mochi with a Mediterranean twist: there was a jar of lemon curd in my fridge which, if mixed with something fairly flavour-neutral like ground almonds, would make a rather yummy filling. 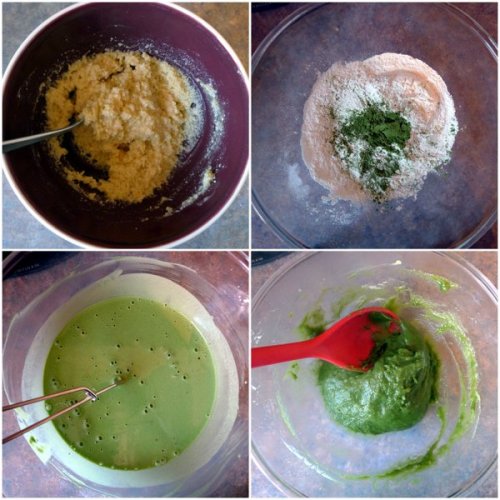 Make the filling, mix the dough, then work it for magic.

The result was great: sticky balls of mochi, full of lemony goodness, the dough matt when covered (evenly) in corn starch but glistening green when you cut or bite into it. The recipe makes 8 fairly large mochi: one could be enough for a serving.

You can make these unfilled too: just roll balls in cornstarch and off you go. The dough tastes a little of tea and the natural sweetness of the mochi dough. I used a little less than the recommended amount of sugar and a little more of the matcha to get more tea flavour. Keep the mochi in the fridge and eat within three days. 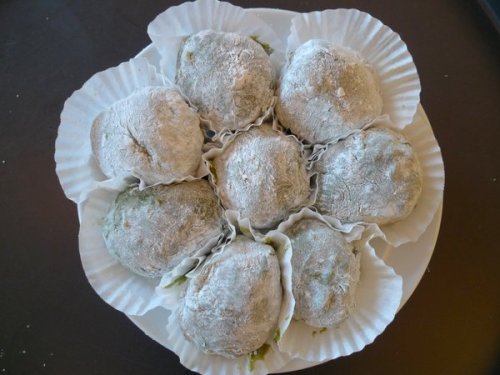 My next attempt will be mocha matcha dough with coffe-flavoured date filling. I have a very good feeling about it. 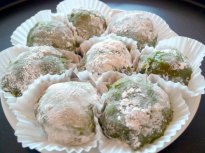 Adagios matchas are available online. The 57 gram tin (the size I got) costs £14 and will give around 25 servings.