Since I last visited Twenty Princes Street and Juniper, they’ve had a complete make-over. The restaurant is now an elegant open space with literary themed art on the wall. The only thing that’s the same is the great view of Edinburgh. When Amy and I visited last week, we were seated at one of the window tables: we had a view of the room and wonderful light from the setting sun. The space feels fresh, French and welcoming. 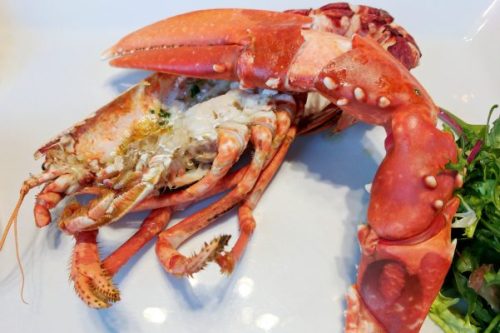 We met in Juniper, where I had a Negroni and Amy had a Minus 33, a spirit too low in alcohol to be called a gin that still rocks a bouquet of fabby botanicals. We sat chatting for a few minutes in a bar much busier than I expected it to be at six o’clock on a Thursday.

We then went through to the dining room and poured over the menu. I often check menus in advance of going somewhere. I had pretty much already decided what I was going to have: seafood all the way. Even so, menu perusal is an important task. Twenty Princes Street is a grill and smokehouse. It offers an impressive list of steaks and accompaniments – fries with and without truffles, mac and cheese, garlic-creamed spinach, to mention a few. The tomahawk steak is for two and sounds like a great indulgence. For non-steak lovers there’s a variety of dishes, from salads through cod in a langoustine bisque to venison. I’m delighted to say that the vegetarian option wasn’t risotto. 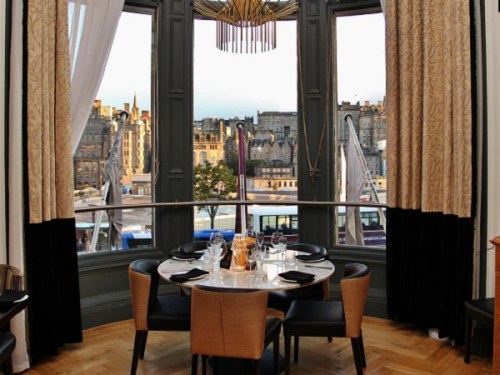 Look at that view! That’s our table.

It turns out that both Amy and I like oysters. A lot. I started with half a dozen with a classic sherry vinegar and shallot dressing. They were beautiful: immaculately shucked, plump and singing of the sea. As I ate each one I felt slightly sad that there was one less to have. (Very “Walrus and the Carpenter”.)

Amy started with the mi-cuit – that means half-cooked as both memory and Google told us – gin-cured salmon and three oysters on the side. Her oysters were as lovely as mine (but easier to photograph and put on Instagram). The salmon was soft, delicious and accompanied by beetroot, chestnut emulsion and lime pearls as well as salad and croutons. Personally, I think the emulsion and pearls were unnecessary. The beetroot, however, was on point, it’s textures and flavour a perfect counterpoint to the salmon. 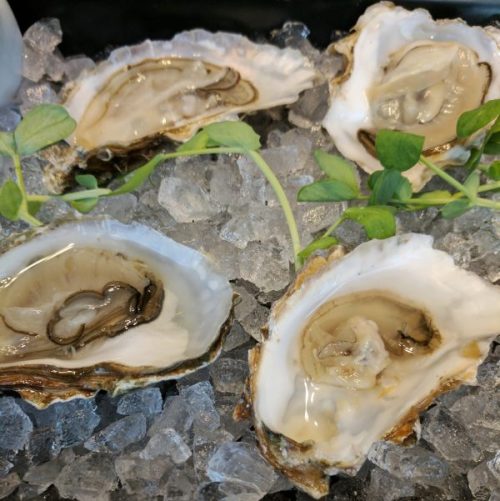 Oysters as fresh and impressive as the sea.

There were three options for sauces to go with the lobster: chimichurri mayo, Parmesan and Dijon fondue and smoked garlic and lemon butter. I went for the fondue and found it a great dipping sauce for the chips. I’m always reluctant to dip lobster in anything since I think it’s so wonderful on its own. The crisp texture, the sweetness of that white flesh. What else does it need? It was nicely presented, the claw expertly cracked, the tail ready to lift out and devour. I slowed my self down by chewing the legs thoroughly before attacking the main attractions. I love lobster. I really do.

Amy had salmon on pumpkin gnocchi served with pancetta, spinach and smoked tomato. All very nicely cooked and well judged. On the side, she (OK, we) had truffled macaroni bites. Nostalgic, crispy-on-the-outside, creamy-on-the-inside nuggets of fun, they were also yummy dipped in the fondue.

We asked to try the chimichurri mayo with the chips. It was gorgeous and would have been great with the lobster. Actually, it’d be great with steak, toast, pretty much anything. 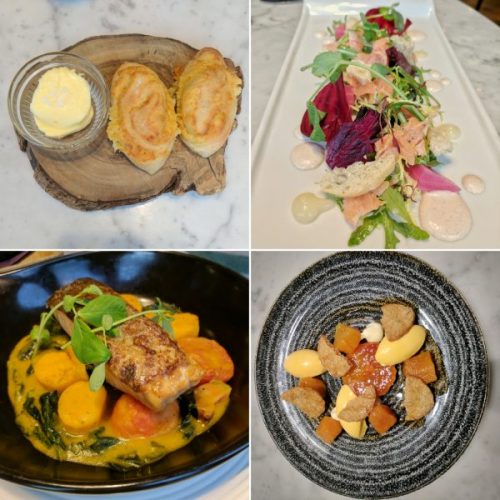 “I’m not sure I need dessert”: rice pudding and ‘pumpkin pie’

As we sipped the last of our picpoul de pinet we discussed what to do for dessert. Amy didn’t really think she needed one. She was replete. But there was soufflé on the menu. Souffle! We really should try it. It’s a good test of the kitchen. We could share it. And the rice pudding. We could share that too. That is, I could have the aniseed ice cream and Amy could have the rice pudding. And then there was the deconstructed pumkin pie… In the end, we each had a dessert. The desserts are twists on the traditional. The ‘fire and ice’ baked Alaska was tempting as was the cheese.

Amy had the rice pudding. It was a king of rice puddings. Creamy, soothing and heart-warmingly comforting. The ice cream and caramel sauce it came with almost made a dessert on its own.

I had the ‘pumpkin pie’. It’s not, as was pointed out to us, a traditional, American-style pumpkin pie, but a deconstruction, a dessert with pumpkin elements. I really enjoyed it. The spiced crunchy biscuits were great. The white chocolate and pumpkin ganache was gentle and smooth. The candied pumpkin pieces were interesting. All of it worked together and all of it was elevated by the candied, sugar-crusted orange slice in the middle of the plate. That hit of citrus lifted the dish from good to spectacular.

You’ll notice we didn’t have the souffle. We’re going to have to go back.

Amy and I had a great meal. The food was cooked to a T, the service was friendly and attentive, the atmosphere was cheerful. The restaurant manages to be both open and intimate so we could see our fellow diners but not overhear their conversation. Twenty Princes Street pays attention to details, serves intersting food at a location in the very heart of the city. If you haven’t tried it, do!

Caroline and Amy were invited to dine by Twenty Princes Street.