Juniper: Street food and cocktails with a view

On a June day when it bucketed it down with 84cm of rain in one day, more typical of the monthly average rainfall , I visited Juniper, the stylish sister bar to Twenty Princes Street, at Hotel Indigo, to try their new Street Food menu and cocktails. 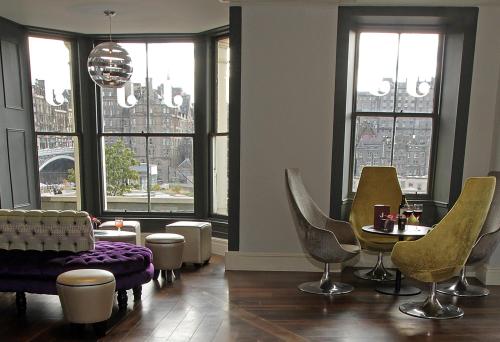 Fellow EdinburghFoody bloggers, Amy and Caroline, had recently visited the main restaurant and had enjoyed their seafood meal and the views.

It was such a shame the weather was so dismal. Located in the heart of the Edinburgh, Juniper is a vibrant and sophisticated cocktail bar, with panoramic views overlooking the city, serving up an eclectic menu with a mix of forgotten classics, modern masterpieces and everything in between.

Our window seat nonetheless gave a great view of the city, and the rain! I was also amused at a man in high-vis jacket and trousers, on top of Waverley Mall opposite, jet-washing the roof.   Surely he could have saved himself a job with all that rain.

Juniper’s Street Food menu offers a choice of 11 savoury and 3 sweet treats. Priced from £4, the dishes are pretty substantial and perfect for sharing and accompanying the wonderful cocktail creations Juniper’s team pride themselves on.

My dining companion C, had driven up from the Borders and was driving home that night, so she was more than happy to try their mocktails, which she said is always good proof of whether a bar is any good if they can delight the non-drinkers. 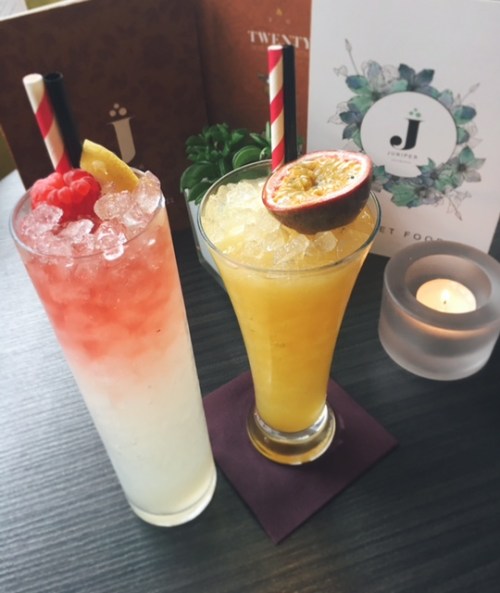 C started with an ‘Exotic Passion’ made from passion fruit puree, orange juice, apple juice, vanilla gomme and fresh lime juice. It was beautifully presented, with half a passion fruit as garnish, and was zingy and fresh. C was really pleased with her choice and said she didn’t feel cheated at all.

I tried one of Juniper Classics, the drinks they have built their reputation on, apparently. My Edinburgh Bramble consisted of Edinburgh Rhubarb Gin, Edinburgh Raspberry Gin, Edinburgh Gin, Gomme, Fresh Lemon Juice served on crushed ice.   It’s a lot a gin but as a long-serve, it wasn’t over potent. I loved it and would happily have gone back for a second but in the interests of research, tried something else second time around.

The street food menu is perfect for sharing

From the Street Food menu, we chose two dishes each. The ‘Three Cheese’ Mac ‘n Cheese caught my eye, as did the Chicken Kiev, served with Garam Masala Aioli, whilst C chose the Rabbit Rillettes, with toasted brioche and a fig chutney and the Sweet Potato Polenta Fries. C’s a fussy eater and doesn’t like spicy food so asked for some lemon mayonnaise (which normally comes with the Cajun Crayfish Croquettes) rather than the Jalapeno sour cream. Our lovely waiter, David, brought both. Great service. 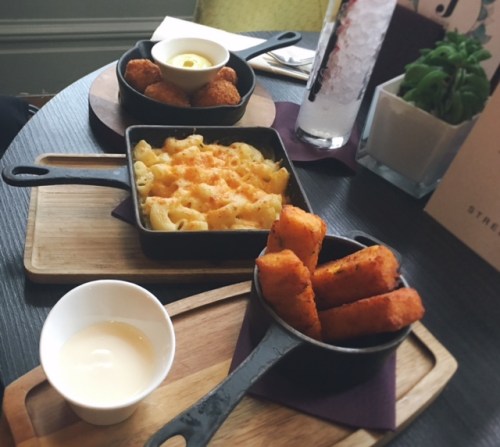 Of the four dishes we chose, three came in cast iron skillets. My mac ‘n cheese was pure comfort food on a wet, rainy night and worked really well with the Chicken Kiev, of which their were five bites. We were both expecting melted butter to ooze out but fortunately it didn’t. Nonetheless, these are tasty morsels and even C liked the Garam Masala Aioli, not recognising that Garam Masala is traditionally used in Indian cuisine, so might have been spicy! It was actually more aromatic.

The Rabbit Rillettes came served in a Kilner jar, with two slices of toasted brioche and a sweet fig chutney.  There was a lot of rillette for the amount of brioche although I’m sure they would have given us more bread if we’d asked. 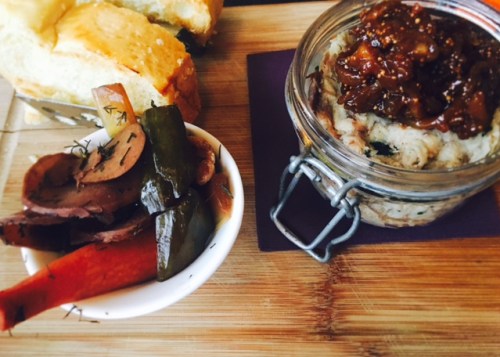 Polenta is one of those ‘marmite’ ingredients where I’m concerned and I’m not a fan, no matter how much parmesan or other ingredient is used to flavour it. I’d secretly hoped she might have chosen the shoestring fries instead.   That said though, the Jalapeno sour cream did elevate these fries to a new level.

Sunshine on Leith – the cocktails brightened the dismal day

For our second cocktail, C chose the Princess Peach from the Sunshine on Leith mocktails, a long-serve of apple juice, white peach puree, fresh lime juice, topped with Fever Tree Soda, whilst I opted for the Purple Passion from their ‘New Town’ list, described as ‘elevated classics and innovative serves’. 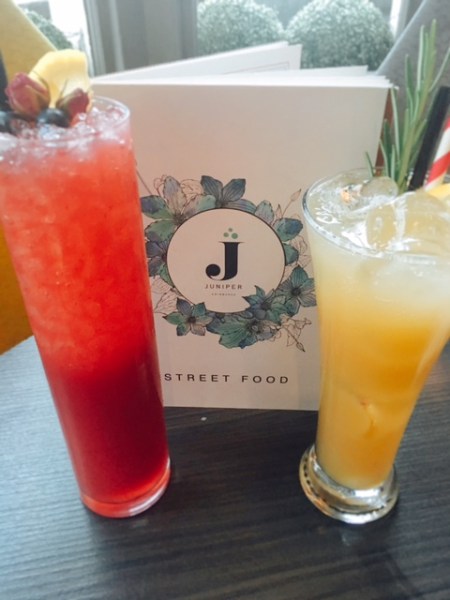 Using Arbikie Kirsty’s Gin, Blackberry Syrup, Lemon, Grapefruit juice and Rose Lemonade (a personal favourite of mine), it was beautifully garnished with some blueberries and two small dried roses, which David our waiter helpfully found out were sourced from MSK ingredients. I’ll be ordering some of these for a new dessert creation I’m working on.

None of the sweet options, a root beer float, ice cream float with only vanilla ice-cream on offer or the mini nutella and cinnamon doughnuts particularly grabbed either of us but the Scottish cheeses served with homemade chutney and Arran oatcakes did.

Be warned, it’s huge. We asked for one portion but were served two separate boards, which we were assured was the serving for one. At £9.50, it’s a lot of cheese for your buck and if you were a bigger party, there’d be plenty to go around. 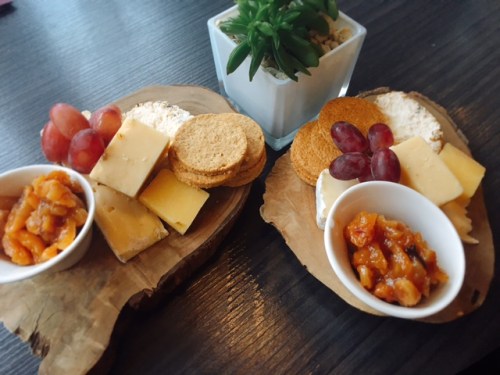 Beware the cheese board – it’s enough for 4 – 6 people

Maybe after all the passion cocktails, I did have a bit of a ‘When Harry met Sally’ moment although it was dessert envy for something ordered by an 8 year old girl, who was sitting well-behaved with her parents in the bar, who were enjoying a drink.

She had spied a dessert from the main restaurant’s menu, ‘a Flaming Morello Cherry Alaska’, which was delivered by the manager with an air of theatre, with the dessert being sprayed and set alight in front of the delighted child. He did say I could try one but sadly on this occasion, the cheese had finished me off and I didn’t have any room left, sadly.

Sleek and chic, Juniper is going to be top of my list now for meeting up with friends.  Not only do they have some impressive cocktail creations, including a cocktail tasting menu (4 cocktails and 4 bar nibbles for only £35 per person) but also a great array of bottled beers, wines and champagnes; although if you want to secure one of those window seats and spy the capital from a totally different perspective, you’ll have to be quick. I’m told they get booked up very quickly. 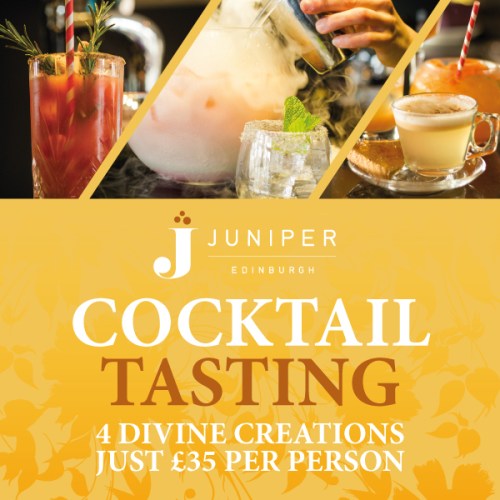 Kerry ate and drank as a guest of Juniper.