The Edinburgh jungle drums had been beating about a new place off Broughton Street and since we might be moving to this part of the world in the future, it felt like a great opportunity to check out the new competition in the hood – Le Roi Fou – or the mad king if your standard grade French is a bit rusty. 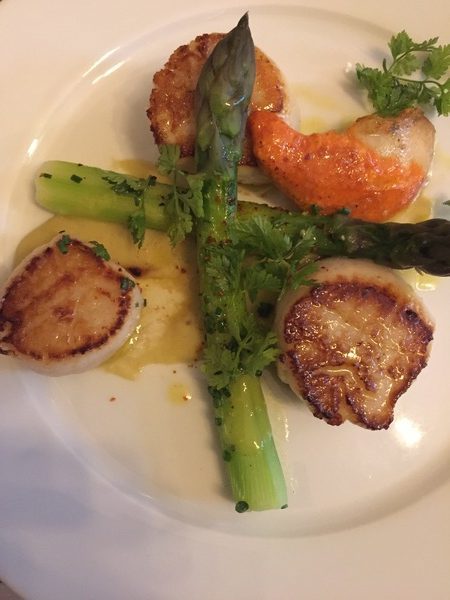 We had left it to the last minute to book for a Friday evening and as a result couldn’t have a table, but instead were offered seats at the bar. Personally, I think this is the best place, as you are in the middle of the restaurant sitting higher than everyone else, so have a great birds eye view of what’s going on, as well as being able to chat to the staff.

Sam, the sommelier was fabulous and had the measure of his two diners very quickly. He could tell we had had a hard week and immediately asked if a glass of bubbles was the order of the day, which it was. He also helped us navigate the menu and come to a very fast decision on dishes for the evening.

Asparagus featured quite heavily across the starters, which was good to see as it is another one of my favourite vegetables. However, combined with scallops it was a no-brainer that this was going to be the preferred dish for both of us, as neither wanted food envy.

The plate was colourful with the bright green of the asparagus, coupled with the orange from the coral of the scallops and finished off with a delicate fennel dressing drizzled over the plate. Seared on the grill, they were probably the most tender scallops I’ve tasted for a long time and just seemed to melt in the mouth.

We felt ready to experiment more with the main course, and to avoid both fighting over the fish I graciously let my other half enjoy the seared North Sea cod and garden peas in a saffron sauce, while I tried out the lentil and piquillo pepper cake. 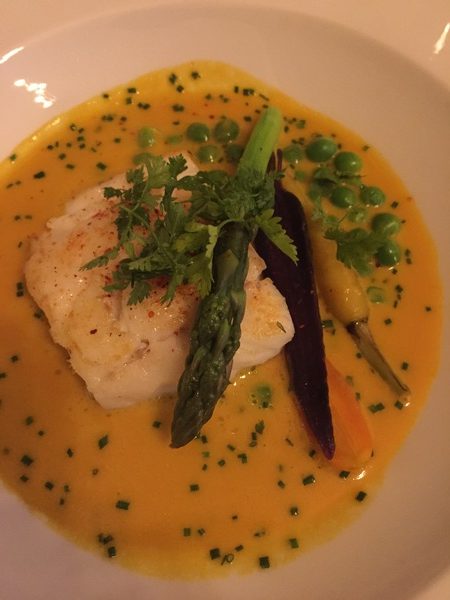 The cod was definitely the better dish of the two, once again the fish flaked very easily and was moist and succulent to taste. We really enjoyed the saffron sauce and the colour that the peas brought to the plate. The lentil and pepper cake was nicely presented and had fused some excitement when I saw it on the menu, as it sounded quite different to the normal vegetarian dishes, however it didn’t tantalise my taste buds as much as the cod – food envy had begun! 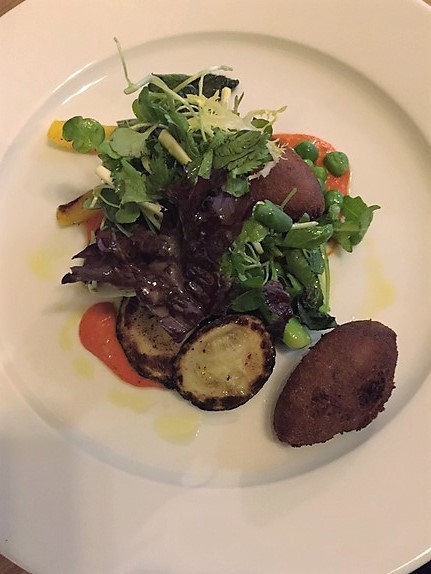 Sam had looked after us throughout giving us interesting wine by the glass options to complement our different mains and then selecting a very interesting dessert wine to accompany the rhubarb. Seasonally, this is probably one of my favourite times of the year with so many great fruit and veg coming through.

I absolutely adore rhubarb and have a favourite crumble recipe, which features rhubarb, strawberries and orange juice, it is so more-ish that it’s difficult to know when to stop. So, when I saw poached rhubarb, pistachio crumble with crème fraiche ice cream, I knew this was the one we had to try. But this was also my downfall, as it was so good and the crumble bits were delicious, that I was craftily side tracked by my other half to talk to Sam and the team while ‘somebody’ went in for the kill and ate all the wonderful crumbly bits! 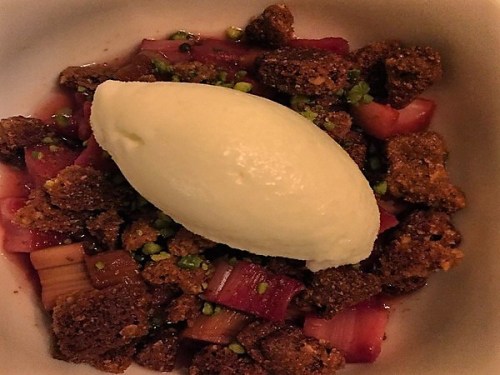 The combination of the pistachio within the crumble was excellent and perfectly moistened by the ice cream. It was a simple, yet sophisticated dessert that I would suggest is easily managed by one and should not be shared.

Jerome Henry is the chef-patron of Le Roi Fou and has come up from London having spent many years working there for Mossiman, as well as working in the big apple too. He certainly has the credentials and from our first foray to Forth Street, I would say he is creating the beginnings of a great restaurant that will hopefully thrive, as this part of town embraces Edinburgh St James in the next few years.