Summer is here! Clouds of smoke rise off portable grills in the Meadows and much beer and cider is being consumed. It’s a wonderful time of year. In Edinburgh, there are a couple of places where you can enjoy the quintessential summer food – BBQ – at any time of year. I was invited to visit the latest: Reekie’s Smokehouse. 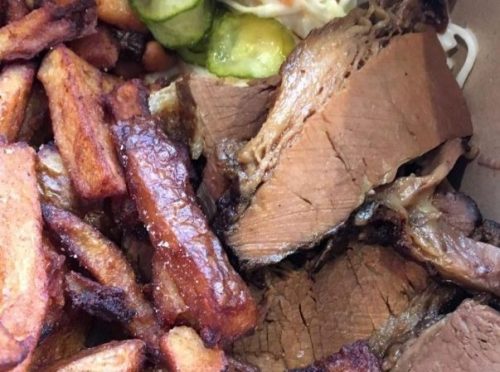 Brisket, chips, pickles and slaw. Entirely delicious and what I hanker for this second.

I asked my friend R to come along with me. We’ve been cooking and eating together for over 20 years. I sent her something like ‘wanna eat lots of meat with me?’ to which she replied along the lines of ‘OMG YEAH’. A couple of hours before dinner I texted her ‘MEATFEAST’. At the time, I didn’t know that was prophetic.

Reekie Smokehouse occupies a corner of Holyrood Road, not far from Holyrood No. 9. It’s a rustic, cheerful space with wooden tables, pew chairs and a wall covered in coloured-in pictures of a pig.

The menu is straigh-forward: BBQ meat. There’s brisket, burnt ends (the ends of the cut returned to the smoker for a little more charring and then cut into pieces), pulled shoulder of pig, ribs, smoked haggis, and at the weekend, pulled beef too. You can have your meat in a tub, a box or a bun, with chips and with different sides. If you want to try everything, and you’re hungry, there’s the meatfest: four 200 gram pots of meat and four sides.

R and I like to do a good job so we went for the meatfest to ensure we tried as much as we possibly could. 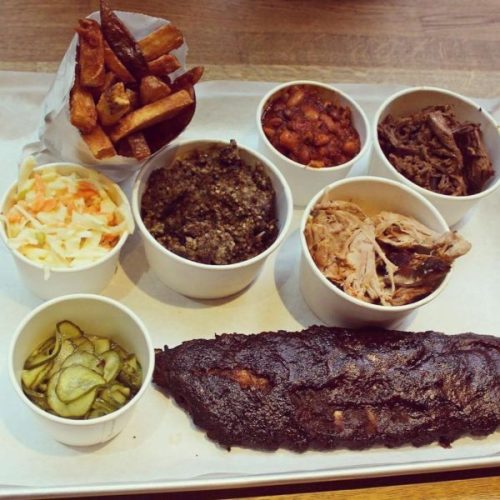 A meatfest – this one with haggis, pork shoulder, ribs and pulled brisket. Photo courtesy of Reekie’s Smokehouse.

My favourite meat was the brisket. So tender it fell right off the fork, it was intensely flavourful and rich with fat. It’s slow cooked, rubbed with meat dust and dipped in gravy after being sliced. The brisket didn’t need any of the interesting home-made sauces on offer but I tried it with the Irn Bru BBQ sauce anyway. It’d be rude not to. (Writing about it, I really fancy a tub of brisket with a side of pickles. Right now.)

R really enjoyed the burnt ends and the pulled shoulder. The shoulder is moist in itself, not mixed with oodles of sweet sticky sauce. I liked that. Often pulled pork loses any integrity due to over-saucing. It could be anything: this, however, was undeniably pig.

The ribs were fun. They reminded me of the first time I ever had them, when I was five. I loved getting my hands and face sticky then and I still like that now. One of the things that makes BBQ such fun is the lack of manners, the fact that you get messy.

The meal was served on a large metal tray and that’s where we ate it. We used cutlery (a fork each) but not plates: the meat went straight onto the tray. To me, that was part of the fun.

The sides – coleslaw, pickles, beans and chips – were all good. The beans had a lovely soft BBQ sweetness to them, that way good American baked beans have. I admit to being a huge fan of home-made, treacly baked beans and a positive hater of the thin-sauced goop that comes in tins. These beans were proper. Chips with rosemary salt were tasty and the pickles were great for cutting through the rich meat.

The different serves means there’s something for all appetites. Prices vary accordingly, from £8.50 for a beef brisket roll with pickles and mustard, £17.00 for a whole rack of ribs with a side, to £35 for the meatfest (serves 4-2 depending on stomach size). 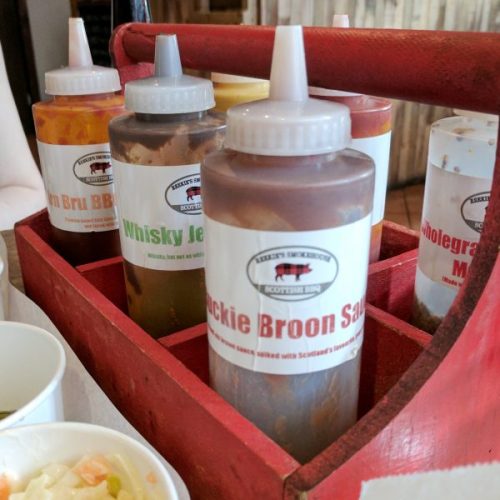 If you’re a regular Edinburgh Foody reader, you’ll know that I live with a vegetarian. As a result, I eat and cook mostly vegetables and pulses. Like lots of people, I was a vegetarian for a few years as a student. I’m not now: I’m an omnivore who likes to know that the flesh she eats has been treated right. Livestock welfare – from birth to abattoir – is important to me. I am impressed that this issue is addressed heads-on on the Reekie’s Smokehouse website. They care not only that the meat they serve me is succulent and luscious, but also that the animals had good lives.

The day we visited, Reekie’s Smokehouse had just added a couple of ales to their menu. I had Brewgooder’s Clean Water Lager and R a bottle of something quite hoppy. We were too full for dessert but for those who have the stamina, there are brownies and other goodies on offer too.

We were the only table of two when we were in. At the back, at a tall table, four people were colouring in pigs while stuffing themselves; close to the entrance, a table of six were protein loading after what I’d guess was probably rugby practice. Everyone was relaxed and cheerful. Staff was friendly and helpful and everyone had a good time.

Reekie’s sometimes travel: they were at the Old Town Food Festival last weekend. Check them out for a Scottish twist on American-style BBQ. 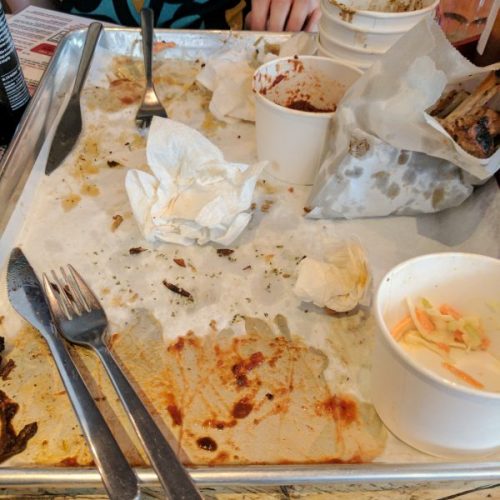 The evidence: we demolished that fest!

Last updated by Caroline von Schmalensee at May 30, 2017.