There’s always a first for everything and at the end of July, I got to experience my first ever supper club with Toasted Radish in the company of fellow bloggers, the lovely Social Bitches, Derek and Isaac. Joining us was Linda Catalano, an Australian producer, responsible for the likes of Briefs and Hot Brown Honey and who is in town for the Edinburgh Fringe. 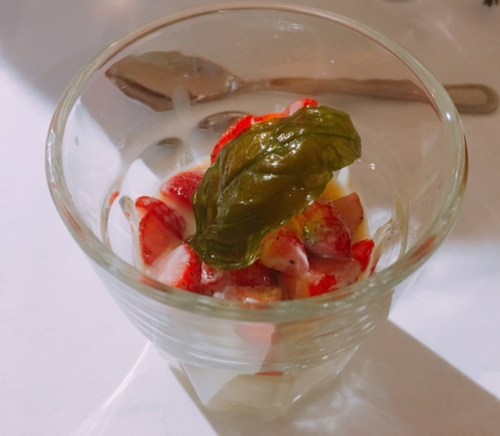 Toasted Radish, founded by Roly Simpson in November 2016, is an Edinburgh based catering and supper club that has simple, creative and thoughtful food at its heart. 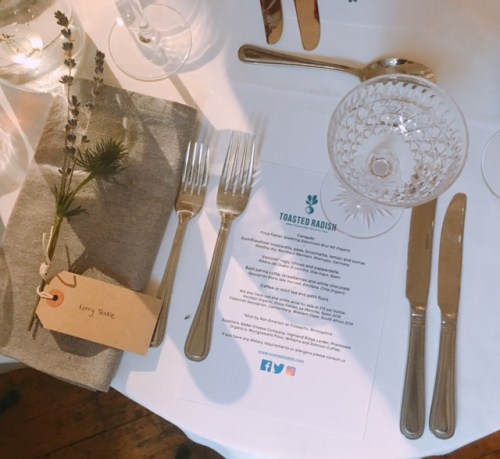 The menu was a secret until we arrived at the venue, which this particular evening was the Century General Store.  We had opted for the ‘with wine pairing’ option but there’s also the option to ‘bring your own’, which seemed to be a popular option.

I also took an extra bottle of Picpoul, as the boys can be fussy when it comes to wine and will invariably opt for a ‘SB’  (which I detest) so a Picpoul is a good compromise.  The Social Bitches turned up with a couple of bottles of NZ Oyster Bay, as predicted, so we weren’t going to go thirsty and all palates would be catered for.

We were sat on tables of three, with two of the tables, including ours, who had booked together, sat with their own parties. The other table of six was made up of diners, who had booked in twos. There was however opportunities for mingling at the start and I had soon started up a conversation with a lovely couple Blair and Gordon, who were attending their second Toasted Radish supper club, which I thought was a good sign. 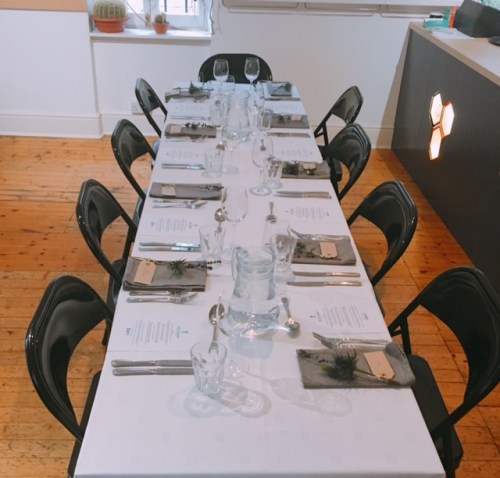 Toasted Radish operate on the ethos of sourcing the very best ingredients with all their menus created on the basis of thoughtfully sourced food, which means seasonal and sustainable and wherever possible sourcing within thirty miles of their location. Their meat and vegetables are organic and their fish is selected with sustainability in mind.

The menu lists their suppliers which on the evening we ate were: Kedar Cheese Company; Highland Ridge Larder; Phantassie Organic’s, Mungoswells Flour; and Williams and Johnson Coffee.

Once seated, we started with canapes, which were an Isle of Wight sweet tomato with reduced balsamic vinegar served in a small egg cup and bite-size sausage rolls with the flakiest of pastry, served with a Finca Fabian Spakling Espumoso Brut NV Organic.

There was a nod to Italy about the menu, which pleased our fellow diner, Linda who hails from Australia but has Italian heritage.

The starter was a dense, flavoursome Dumfriesshire mozzarella, peas, bruschetta, lemon and sumac served with a dry German Riesling, which beautifully complemented the sweetness of the peas. 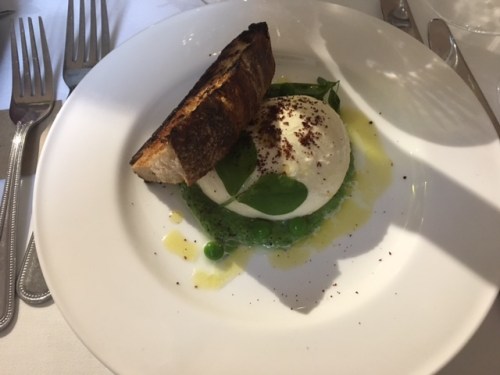 The venison ragu and chives with home-made pappardelle was homely and comforting and was served with a red Spanish Ribera del Duero. Toasted Radish could even tell us that the venison had been shot by Ron Emerton in the Trossachs in Stirlingshire. I loved this level of detail and traceability. 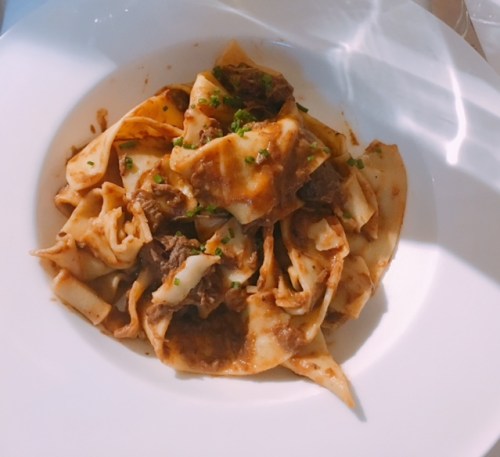 The star of the menu for me was a basil panna cotta, strawberries and white chocolate, which had just the right level of ‘wobbliness’ and perfectly complemented Roly’s choice of dessert wine, an organic sweet late harvest Chilian Sauvignon Blanc.  For once, I may have been naive in saying I don’t like  SB, which I normally find too acidic and have been won over by this sweet dessert wine. This admission I know will definitely please the Social Bitches.

Coffee or fresh peppermint tea was served with moreish petit fours, with the apple toffee with a dipping raspberry sherbet being the outstanding winner. It was so delicious, we came back for more. Just don’t tell my dentist! The toffee was soft yet chewy and thankfully my fillings survived. 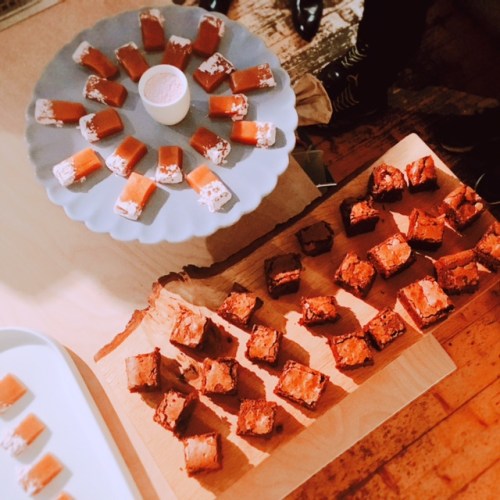 Roly Simpson, Toasted Radish’s founder and his team of three run a tight ship, producing a menu of delicious seasonal offerings, from a small kitchen and I loved my first supper club dining experience, where you will meet like-minded foodies and bon-vivants, whilst enjoying great food and convivial conversation. 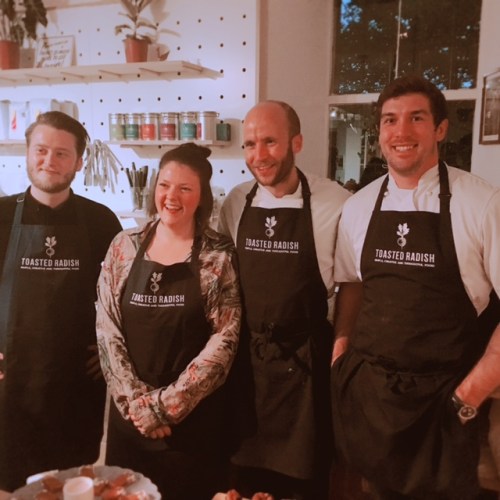 Roly Simpson of the Toasted Radish Supper Club with his team

Don’t miss out on the Fringe supper club

And if you’re reading this and feeling just a tad jealous and feel you’ve missed out, don’t worry,  there’s another Toasted Radish Supper Club popping up during the Fringe at Arthur Canon Doyle Centre in the West End on 12 August. Set in this historic building overlooking St Mary’s Cathedral, it promises to be a winning evening worthy of a crime fiction heavyweight.

The Toasted Radish Supper Club costs £35 – £55 (with wine pairing, being the more expensive option) but you are welcome to bring your own wine.

Kerry dined as a guest of Toasted Radish.