Plant-based diets – a trend in the nick of time?

A few years ago I was interested to see that Scandinavian food, ingredients and ways of thinking about food was all the rage. Then clean eating happened. Always one to try to resist a fad I kept schtum about that one. Recently, I was listning to the BBC’s Food Program (by way of podcast). They were looking at cookbooks and general food trends for 2018. Plant-based eating came up. It has in most of the food trend emails I’ve been receiving recently too. 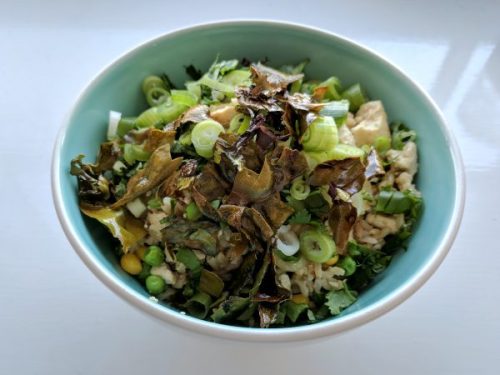 Once upon a time in student land…

When I was a student, almost everyone was vegetarian for at least a year. I saw a documentary about animal stewardship that put me off eating meat for a good while. For some, it was an economic rather than ethical decision. But we all did it. After a few years as a vegetarian I lapsed and then my mother became vegetarian. I don’t think we overlapped, however, like me, she lapsed and we were both pescatarians for a while (its difficult to feel sympathy for fish).

Me, and most of my friends from university, are now what some would call flexitarians and I would call opportunistic eaters. I live with a dairy-intolerant vegetarian so most of my home-cooked meals are vegan. Even when he’s not here, I tend towards plant-based. When I’m out, I like to eat seafood or, occasionally, red meat. Lamb is my favourite. I could give up beef; I don’t want to give up lamb.

I used to live with someone who loved chicken like I love lamb. One Film Festival we went to see The Unatural History of the Chicken and that put him off chicken for months. It puts me off to this day. Unless I’ve seen the critter strutting around my cousin’s yard and know its name, if it’s chicken, I’d rather not eat it. I want my meat to have had a good life.

Over the last decade more and more of my friends turned out to be vegetarian – even before I moved in with one. Lots of the couples I knew were one veggie, one omnivore (and no, none of us cook two separate meals each day because that would be madness. Most omnivore partners do not think having meat only rarely is a hardship).

Young people around me – to me, that’s anyone 35 and younger – are going vegetarian or vegan. My niece is vegan. For her, it’s all about the environment. She can get the nutrients she needs from plants and she knows that doing so puts less of a strain on the planet her generation will inherit at some point. (Someone has to look after it.)

The Food Programme talked to bookshops around the (Western, English-speaking) world and found that vegetarian and vegan cookery books were on the rise across the board. In the UK, they’re selling tremendously well compared to previous seasons (which means they’re still not outselling omnivore cookbooks).

Food culture changes over time. In modern Britain, most of us can afford to eat meat every day. It became a part of a wealthy and prosperous society: ham sandwiches for lunch every day, roast on a Sunday, burgers, sausages, mince and stew pieces.  We’ve made meat cheap, often at the expense of animal wellfare and with side-effects for the environment in many countries with heavy meat industries. At the same time, we forgot how to prepare difficult, low-status cuts of meat until they became fashionable in restaurants again.

I personally don’t have a problem with the killing of animals for food (no, not even cute ones like puppies). My issue is entirely with how we keep them alive and kill them. Veg comes with environmental side effects too – soya (I am eternally told) is the root of deforrestation in countries we really want to continue growing forrests. Quinoa is problematic. And avocados, well…

Plant-based consumption is increasing in my bubble. I find it interesting that it’s increasing outside that bubble too. It used to irk me that there was a firm dichotomy: carnivore vs vegetrian/vegan. I think that distinction is softening with more and more people increasing their plant-based consumption even if they’re omnivores.  Does it mean that more people are thinking about how their food is made and where it comes from? That can’t be a bad thing.