The Hairy Bikers went to Norway on their ‘bakeation’ this year, and Jamie Oliver went to Sweden last year. Scandinavian cuisine is having a moment (as Steffi Dellner pointed out in Prospect Magazine). I had noticed too and I was thinking about what makes Scandinavia hip at the moment. My train of thought started over a kanelbulle at Wayne’s Coffee in Stockholm and continued running, slowly, and stopping often, as I had a weekend of pear cider and sourdough bread in the city of my birth. It was prompted two things: the news that some clever Swedish spark has tried trade marking the term ‘Scandinavian design’ and the Welcome to Stockholm, the capital of Scandinavia sign that greeted us when we came in from the airport. 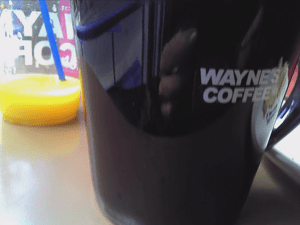 You have Starbucks, we have Wayne’s. Same old, same old? No, not really. But yes.

I’m from Stockholm but I still think claiming it the capital of three countries like that is outrageously cheeky. Scandinavia is Sweden, Norway and Denmark but I think most people think of Danish and Finnish designers when asked about Scandinavian design. Ivar Aalto, George Jensen,  Holger Strøm: not Swedish and not all Scandinavian. If you can name a Swedish designer, without Googling, let me know. (IKEA is not a designer…) It could be that I have misjudged every one else’s awareness.

What makes being Scandinavian so special that you’d want people to associate it with your country over the other Scandinavian countries? Design is central, ideas about equality, sexual freedom and good looks (real or imagined) play a part too. The food is an added bonus.

To be honest, I think the current interest in Scandinavian food is a fashion thing, a fad, like Japanese food before it. We cycle through food fads so this one will pass but in the meanwhile we should enjoy easy access to great bread, fabulous cakes and wonderful ways with fatty fishes. Here are some of my favourite things about Scandinavian food.

Yes. It is all about the fish. Scandinavia is surrounded by water and full of rivers and lakes. Fish is a big part of the diet. I remember being told in school that people working as servants in the north, where the salmon runs go, had agreements with their employers to only get salmon three or four times a week. (I can’t remember quite when this was, probably mid-1800s, when millions were made in logging but servants were still mostly given salted fish to eat.

As well as fatty fishes like herring, trout and salmon, we have – and eat – a lot of other seafood. Lobster, crab, crayfish, prawns and mussels were part of the everyday diet when I lived in Sweden. I can’t claim that we ate just like every other family, but we ate what was easy to get. Back home, you get mussels in brine in tins. Healthy, tasty and cheap.

We recently found that not every town in the country had a sushi bar on the corner. Apparently, that’s a capital special. But in Stockholm, honestly, you can’t swing a salmon fillet without hitting a sushi bar (or a Wayne’s Coffee).

I know. I’ve never really got used to British bread and I can be a terrible snob about it. White toasting bread is not for me. I like German pumpernickel, sourdough from all over the world, and rye bread in all its forms.

Crisp bread is one of my very favourite things. As you know, Peter’s Yard sells a very nice version, or you can get less gourmet but equally crispy stuff from IKEA.

I have dreams of this particularly sticky loaf, half rye, half wheat, that I had when as was a kid. It still gets referenced in Swedish books: if you come across Skogaholmslimpa (Skogaholm’s loaf) you’ll probably not go into paroxysms of nostalgia and joy but don’t be surprised if your Swedish friends do. Especially if you serve it to them with, say Grevé or Västerbotten cheese.

For the last year or so, sourdough is taking over Swedish baking. Everything is made with sourdough and people grow their own, as it were. There are even sourdough hotels to leave your precious baby leavener with when you go on holiday. 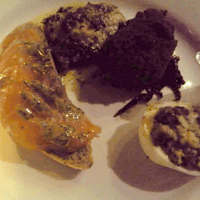 Cured salmon, stuffed egg (mmm!), kale dumpling and cods toungue. Unfortunately, I missed the class in good food photography. Believe me, it was all very nice.

Last week, I was at First Coast for an evening of Scandinavian food. First Coast’s special evenings offer a selection of starters and desserts, so all you have to decide on is the main. I rather enjoyed my fishy starter with gravad lax, a stuffed boiled egg, kale and potato dumpling and cods’ tongues.

I then had a Swedish dish, biff à la Lindström, which is a Russian-inspired beef pattie with beetroot and capers. If you’ve read my posts before you’ll know that I am rather a fan of both.

We ended with an apple and rye trifle, Kvaejfjord cake and cinnamon bun. I know the Kvaefjord cake by a completely different name but it is a delightful concoction of buttery sponge and delicate meringue.

What made the evening so nice was that we were in a Scottish restaurant, getting a taste of Scandinavia. Swedes, like Brits, are interested and curious about foreign foods. Now that people travel more, you can get really good that’s a mix of different ingredients and influences. It’s a kind of fusion, I suppose, adapting techniques and combinations to local produce and practices. It makes eating out fun.

Scandinavians eat a lot of vegetables. A lot of potatoes (although we’ve replaced tattie starch with pasta and rice starch to a great extent over the last couple of decades) but also a wealth of other vegetables. Beetroot, for example. Pickled, yes, but also boiled and served with butter, or roasted and served with feta cheese and yogurt.

It’s not all about root vegetables though. I grew up with a lot of vegetables à la grecque (with garlic, olive oil, lemon and parsley), ratatouille, tomato and onion salad, green salads of all kinds, grated carrots with oranges and fruit, various cabbage salads and gentle pickles or soured vegetables.

Sandinavians have a reputation for eating healthily. I think vegetables is part of that because we eat them. (They are good for you.)

Where to go for Scandinavian treats in Edinburgh

For the flatpack version of Scandinavian cuisine. I liked it better when they didn’t have their own versions of all the foods but sold original, Swedish brands. Oh well. And remember: the meatballs might sound tempting but they’re not worth it. Not even with an ocean of lingonberry jam.

For breakfast, cake and lunch, sit in or take away. If you’re hankering for a cinnamon bun – and who doesn’t? – this is the place to go. And did I mention the crisp bread? I did, didn’t I?

Go here for drinks and food with a Swedish twist. Ask for a Green Wolverine – my favourite cocktail after the negroni – and look out for their special activities and evenings. If you’ve got a sweet tooth, try their range of Idun ciders. The lingonberry is very nice.

Have I missed anywhere? Let me know!