Experiments in fermentation: the funky side of the kitchen

There comes a time in any foody’s life when you want to recreate specific flavours. With some of us, it’s a desire to cook a perfect 5-star meal. With others, it’s jamming, pickling, drying. Or fermenting. Amy and I have both caught the fermentation bug. Here’s a story about some of our experiments. 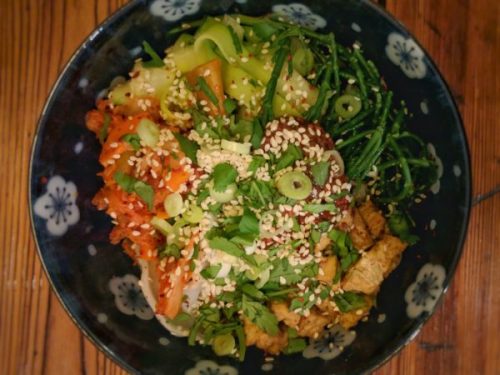 Kimchi in action: we’re fermenting for pleasure rather than to keep vegetables out of season.

Although it’s very trendy at the moment, fermentation is not something that excites me particularly. I’m not obsessed with my gut health and until 2017, I generally interpreted the sweet fizz of fermented food as a warning sign. (That is, of course, with the exception of beer. That’s some tried and tested fermentation.)

But now, the appeal is actually in those elements that originally deterred me: I want the saccharine tingle. This is usually in the form of pickles, to compliment Asian-inspired food. I’m all about variation at the dinner table, and I think having small dishes of different homemade pickled veg – some sweet, some fiery, some sour – visually enhances a meal and reduces over-eating. Plus, it’s good for me, apparently.

It’s in the air and although I don’t consider myself a faddy foody, some things stick. The glories of fermentation is one such thing. With increasing credible research around biota, fermented, lively foods do sound as if they may be a good idea. I get a great satisfaction from  making things myself and if it’s delicious and good for me, then that makes me happy.

My route into fermentation was two-fold: sourdough and the search for vegetarian kimchi. That brought me to sauerkraut, a food I like now but disliked for decades. Initially it was the flavour, then it was its image. Sauerkraut I associated with things I found hopelessly uncool as a teenager.  Now I have a batch in the frindge. It’s good that we can change. (Cue my teenage self doing a massive eye-roll.) 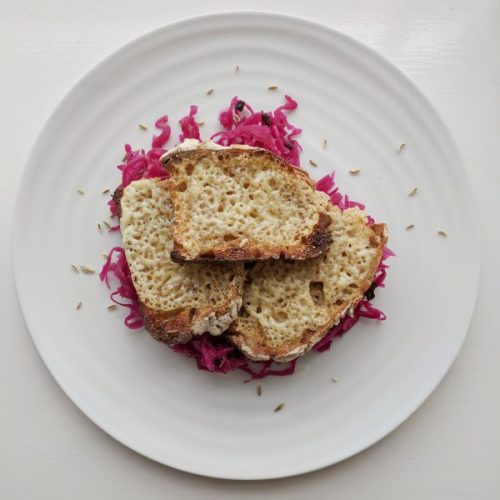 Two in one: sourdough cheese on toast on a bed or red cabbage kraut. All the good stuff on one plate.

My favourite sort of fermentation is the alcoholic kind, and from pale ales to chocolate stouts, there’s quite a spectrum of results. Currently, real hardcore fans of fermentation are in luck, as sour beers are all the rage. (But I don’t think you can pretend it’s going to improve your gut health.)

Rather than using yeast with known properties, sour beer is inoculated with bacteria or a specific yeast strain which is known to produce lactic acid. In some cases, the beer is simply left exposed to the air to acquire yeast that’s naturally floating around. This produces a range of funky flavours, often combined with fruit, and there are different levels of sour from tart to lip-smacking, according to acidity and the origins of the yeast. For good examples, seek out a lambic or gose, or try any of the outstanding stuff by the Wild Beer Co.

Danielle sowed the seed of my interest in sourdough. I love bread with texture and flavour. A rye sourdough is a favourite of mine. Add a little treacle and some fennel, cumin and aniseed and I’m in heaven. A friend gave me a sourdough starter and a recipe and I started my journey. I’ve managed to make my starter stop but now have a rye and a wheat sitting chilling in the fridge. The rye I use mainly to flavour crispbread and the wheat I use for everyday bread. I’m still learning: haven’t yet achieved my ideal crumb – big bubbles, good chew.

I think getting starter from a friend is a great way to get get going but you can make your own with the yeast in the air. Sourdough is a very zen thing. Both making the starter and proving the dough takes the time it takes so baking with it teaches you mindfulness. If you’re into that sort of thing. There’s a rythm to a baking day. I’m not going to go all mystical on you but one of the pleasures of sourdough is the challenge: it takes a little while to understand how it works. The first loaf will be tasty but probably won’t have the perfect crumb or height. This comes with experience. 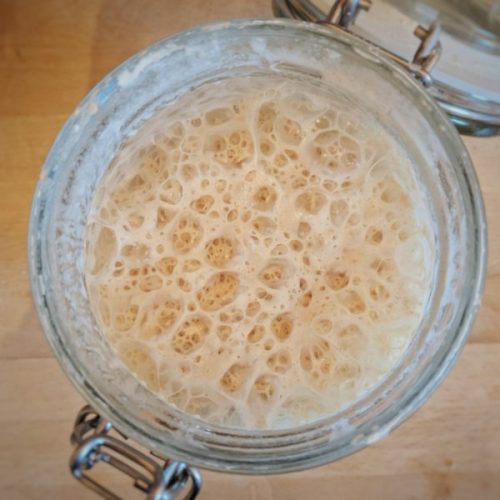 Look at that! A cheerfully bubbling sourdough starter.

It’s been a while. I should take my starters out and build up sufficient for a bake this weekend.

Encouraged by a more gut-focused colleague, I did attempt a couple of sauerkrauts last year, with questionable success. Although relatively straight forward, a lot comes down to the quality of your Kilner jar and its seal, as well as following instructions.

I learnt that the addition of seaweed makes for slimy kraut, sadly, and insufficient cabbage in the jar results in black spots, meaning something has gone horribly wrong. Even when successful, I found my interest in salted cabbage is severely limited, so these days it’s only a last resort to using up leftovers.

I love how easy sauerkraut is to make (mine’s been successful) but I love kimchi more, so that’s what I make. I found both really scary until I made them; now I have no more fear. Kimchi’s sulphurus whiff, made all the stronger by garlic, and its heat is amazing. A noodle bowl without kimchi just isn’t right. A good portion of kimchi cheers up left-over rice, yesterday’s salad and makes a great side salad with lunch. (Sourdough toast with goat butter and kimchi? Yes, I made that. It was awesome.) 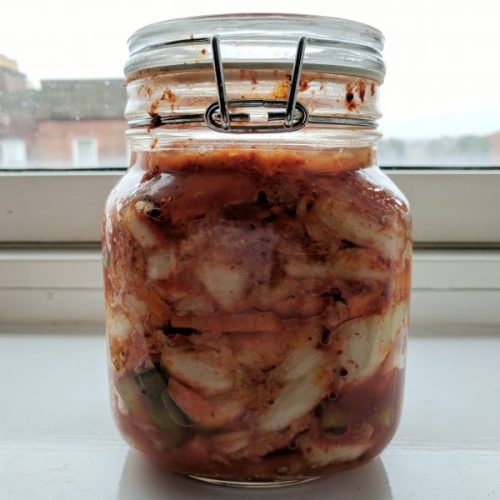 Kimchi in the making. Lovely.

Lactic acid fermentation is fairly harmless and works with a lot of different vegetables. Amy’s right: follow the instructions carefully the first few times and you should be OK. I have had good results with this recipe for kimchi and this recipe for sauerkraut. They are both adaptable – swap daikon for carrot in the kimchi or use red cabbage for the kraut, play with flavourings. I keep increasing the amount of chilli in my kimchi. I like it hot. (I want to kimchi red cabbage. Wouldn’t that be beautiful?)

Another thing I’ve learnt is that good fermentation requires trust and patience, which I have in varying degrees. Caroline gave me a scoby at the end of last year, having been to a kombucha course at Aizle. It would be a lie to suggest it did anything other than terrify me.

However, successfully birthing this thin, pale, stinking sponge-like object was seemingly the hard part. So recently, shamed by my inaction, I brewed up some apple tea we’d had for too long, threw in some sugar and the scoby, and hid the whole thing in the dark. Trust and patience. 10 days later, it smells and tastes like apple cider vinegar; not nearly as horrific as I’d expected. Will I drink it? Yeah, probably. How happy my gut flora will be.

I’ve already written about my kombucha experiments – I’m been making more vinegar than I can actually use. Time to slow down. My scoby’s going into a hotel. 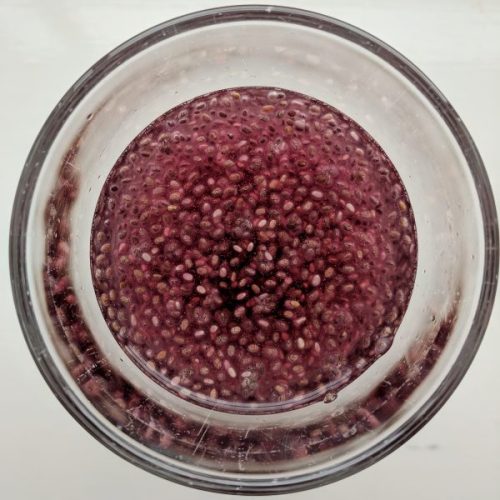