Bread Baker Danielle October 13, 2014 October 8, 2014Beer
Locals may think of  Great Grog as wine purveyors. Indeed they are, but they also have a large range of beers from many different small breweries. It’s astonishing to realise, also that Great Grog have been in business since 2005 and can count 75 years experience between all the staff. They now deliver across the UK. 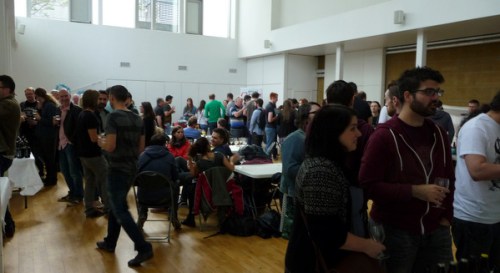 Wanting to showcase some of Scotland’s finest ales, a Small Bottle Fair was held recently. Six Scottish breweries and a couple of distributors were exhibiting. You were On arrival you were provided with a small glass, and tasters from bottles were given – as many as you wanted. There was a supply of water to rinse glasses, and vases to dispose of unwanted liquid (beer or rinse water). And it wasn’t all men! There was a good turn out with a convivial atmosphere with lots of people comparing notes. 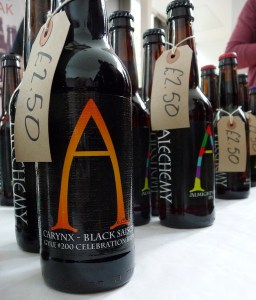 Mr EF went off to sup some beer and tried the following beers on your behalf!

Alchemy Brewing of Livingston. Head Brewer & Director James began brewing whilst at university in Edinburgh. After studying chemistry and brewing yeast for his PhD he came back to brewing after working in the pharmaceutical industry. Sadly their website is rather out of date. 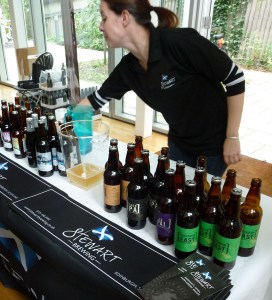 Lining up the beer on the Stewart Brewing Stand

Stewart Brewing based in Loanhead set up in 2004. They go from strength to strength winning many awards.If you’ve got a thirst to create your own beer, you can at Stewart Brewing’s Craft Beer Kitchen.

Cauld Reekie 6.2%. This beer has just won Europe Gold in the World Beer Award European 2014. It has liquorice/chocolate flavours, and is quite bitter. 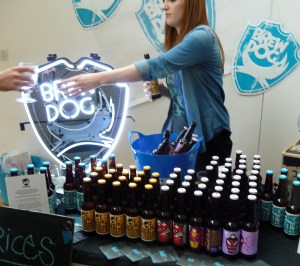 BrewDog as funky as ever

Cromarty Brewing of Cromarty. This is a family run business started in 2011. Craig the Head Brewer is another graduate from the Herriot Watt Brewing Science course. On this occasion the Kiwheat was not to my liking. It had a rather a sour citrus flavour. 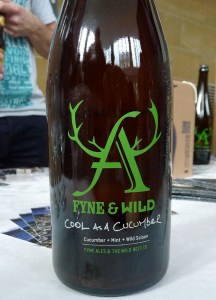 A collaboration between Fyne Ales and Wild Beer

Fyne Ales.  started brewing back in 2001. Tuggy and Jamie Delap were determined to bring fine ales to an area of the country where little was to be found.  Their beers have since won many awards.

Cool as a Cucumber – a collaboration with the Wild Beer company based down in Somerset. 2.9%. Cucumbers and a ‘garden full of mint’ incorporated in this beer, which you can taste. Overall a clean pallet cleanser.
Land Slide 6.0%. A bitter brown ale, and a bit fruity. I found this average.
Vital Spark. 4.4%. Lively (carbonated) and dry dark ale. 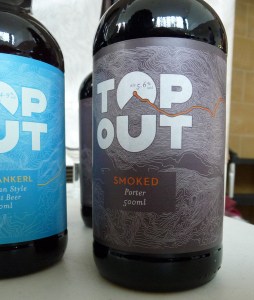 Smoked Porte from Top Out – Our beer of the day

Top Out of Loanhead. This brewery only launched in July 2013. Suffice to say, they are brewing some good beer. 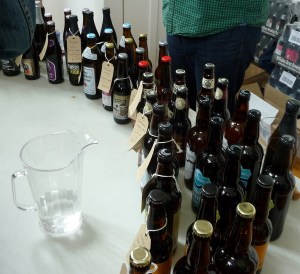 A fine selection from the distributors

Visit the Great Grog Shop 2 Dalkeith Road, Edinburgh or Telephone 0131 667 2855). You can check out all the prices on their beer list.