National Chocolate Week – any reason for a supermarket chocolate tasting

Next week is chocolate week. I’m not a chocolate nut but I am a chocolate snob. As you know, if you’ve followed us for a while, I’m a fan of savoury things: salty licorice, all things umami. It’s the same with chocolate. I like the dark stuff. So, for fun rather than profit, I decided to do a chocolate tasting to see what was available from the supermarkets I have access to. You’re welcome! Or maybe not. 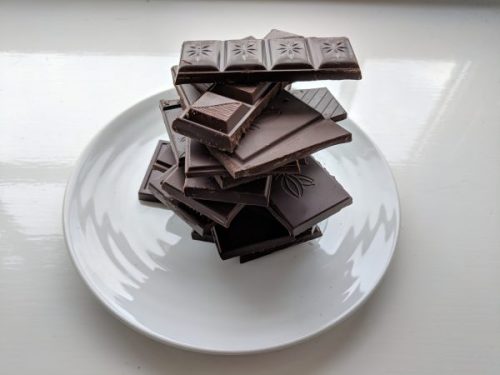 We eat a lot of dark chocolate in our household. (By which I mean a bar or two a week.) I don’t pretend for a second that I eat chocolate for health. It is 100% (or, more commonly 72%) about pleasure. Good dark chocolate has so much to give.

What do I consider good chocolate?

For this tasting, I went to the supermarkets close to me at work and at home and bought the cheap and the fancy more or less randomly. I’m not being exhaustive (but I won’t need to buy more chocolate for a couple of month).

The results are in

Having eaten a lot of dark chocolate, I had to conclude that either my palate is jaded (a distinct possibility) or there isn’t that much difference from one bar to another. There’s a strong pull towards the centre: a smooth, mellow, chocolatey chocolate. None of the ones I bought offered much acidity or berry flavours. I fully understand why but was surprised. One of the things that inspired me to do the tasting was how flat we’d found our default chocolate after having eaten a couple M&S single origin bars.

Comparing them side by side over a weekend we were oddly unimpressed by pretty much everything. Overall, we liked the M&S more than the cheaper stuff, even when trying blind. We like less cocoa butter, more cocoa. But there was too much to try, it became a bit of a chore, even though we never tried more than four at one sitting (in 5-8 gram portions).

Maybe the take-away is this: too much chocolate affects my ability to enjoy it. Only have small amounts at any one time. Sound reasonable. 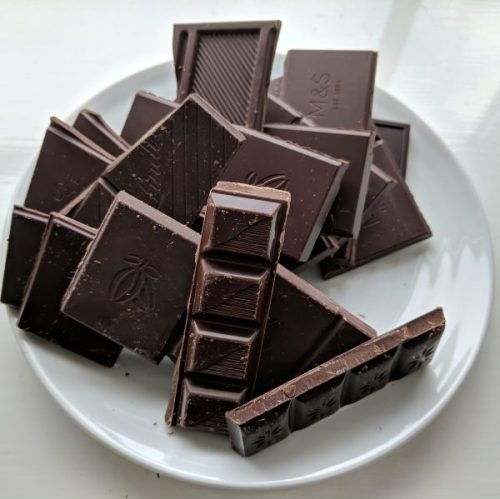 That well-constructed tower fell. Turns out you can get too much of a good thing.

Light brown and smells chocolatey. Melts well but tastes of sugar more than cocoa. A thin, watery after-taste. This is what dark chocolate used to be and I’m glad we’ve moved on. If you told me this was a milk chocolate, I would have believed you.

Glossy, medium brown. Smells of cooa. Quick to melt. Tastes of vanilla and white sugar. Flat in flavour. (50% can be delicious but I didn’t like this much.) This comes in under £1 and I think it’s worth spending the extra money to get something that tastes of chocolate.

No. Cocoa content is not a sign of quality. Flavour is. Saying that, I find most milk chocolate too sweet. That’s why I’m hunting dark chocolate. Since the idea that high cocoa solids = quality has caught on there’s plenty of that stuff around and it’s what I buy.

Cocoa and red berries on the nose. Dark, smooth, rich with a hint of coffee. Melts nicely. This is one of our go-tos and one of the reasons I wanted to do a tasting. We tried something else, then went back to this and found it…lacking.

Melts well, nothing special on the nose. Pleasant but creamy and light, not very interesting.

Berries on the nose and a sharp bitterness. Dakr and deep in colour. Deep cocoa flavour with slight hint of fruit.

ON the nose, this has something a little sharp, almost chemical. On the palate, it is light, not very dark in flavour. Melts well but is dull.

Has a slight smokey undertone which I enjoy, a hint of berries. A little odd but pleasingly complex. Melts well.

Very pure chocolate on the nose, clean cocoa with a hint of nuts on the palate.

Melts quickly with very light flavour and a big hit of cocoa butter. Doesn’t register on the nose.

After an Indian meal, or a hot chilli, your taste buds might need a little help picking up nuances. I give you: the 80+ bars. You can get 100% but I didn’t buy any since I’d be eating that entirely on my own. It’s a purity too far for Christopher.

Judging from the shape of the bars, Lindt are the makers of Sainsbury’s dark chocolate. Their own 85% offering is dark and glossy, mellow in flavour and has a balanced but not overwhelming bitterness.

Slightly nutty on the nose. Smooth but less so than the Lindt. Slightly lighter in colour too. Has sweetness, a hint of coffee and nuts. I like this because it comes in five individually wrapped bars. It feels like a treat to share one of those with a coffee after dinner.

Hint of coffee on the nose, or is that just the cup I just had? Clean, uncomplicated chocolate flavour.

Mild, smooth, not overly bitter. Not overly anything. 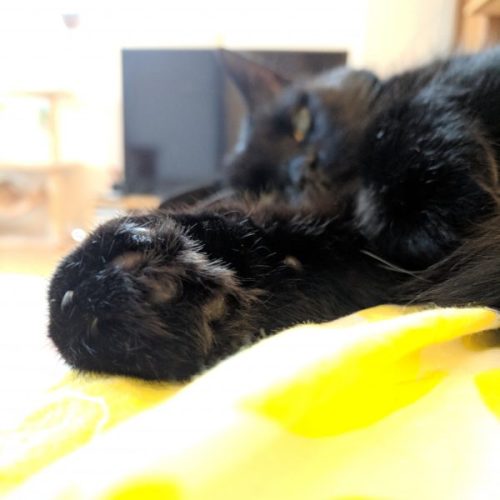 Why a picture of my cat? To thank you for reading this far and because this is how dark chocolate usually makes me feel: mellow, paws relaxed.