I was at a vegetarian restaurant in Vienna the first time I came across seitan. It was the main ingredient in a couple of the mains and I had never heard of it. I asked, got the wrong end of the answer stick and thought it was a type of bread. Christopher tried it. I can’t remember what he thought so I’m guessing it was unremarkable.

Time passed, and I came across seitan again. This time I looked it up: it’s gluten. All you need is some vital wheat gluten (its a type of flour) and you’re off. I’ve been experimenting. 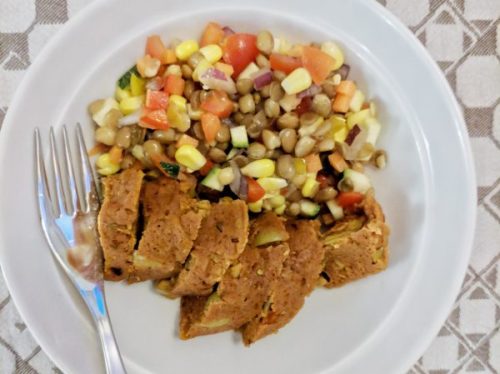 Lentil salad with my standard seitan (jazzed up with a few olives). Here in sausage shape. More or less.

For those of us who can eat gluten, seitan offers a chewy, high-protein ingredient that can be used in the same way that meat products are. I’ve been using seitan to make Bolognese sauce, moussaka, doner and sausages. It can be made into convincing meat replacements but that’s not quite how I use it. I’m not looking for a 1:1 likeness, but rather something I haven’t already got in tofu, a texture and a flavour-carrier that adds something new to my culinary toolbox.

Vegetables is my dinner. And pulses. Mostly pulses.

Ours is a vegetarian household. (It’d be vegan if it wasn’t for cheese. And kefir. I could live without kefir but life without cheese? That’s asking too much.) I’m not vegetarian, a fact that confuses many people. I’m asked, more often than I wish whether

No. And no again.

Firstly, we both cook. And we eat the same dishes most of the time. I’m not vegetarian but I’m also not an obligate carnivore*. I just don’t eat meat at home. Saying that, there are food stuffs that pulses can’t replace: sausages, for example. I love sausages. In stews, with mash, in a bun. So that’s where my seitan experimentation started.

Playing with my food: forays into seitan

The first seitan outing in our flat wasn’t that great. Gluten flour, a little gram flour and water; knead like mad; chop into pieces, boil in stock for 45 minutes. Very filling but not that tasty. Simmering seitan makes the texture quite soft (unless the dough is really dense) and I find I don’t much like it. Also, most of the flavour goes into the water. (And makes a stock perfect for lentil soup, but that’s another story.) We also tried to bake it in the oven but the resulting ‘nuggets’ were too bread-like, too odd.

I found this recipe from Vegan Dad and made my very first seitan sausages. The sausages are steamed and retain all the flavour I’ve put into the dough. They’re chewy, satisfying and tasty. I’ve upped all of the spices and make these on a regular basis (with a few adjustments). 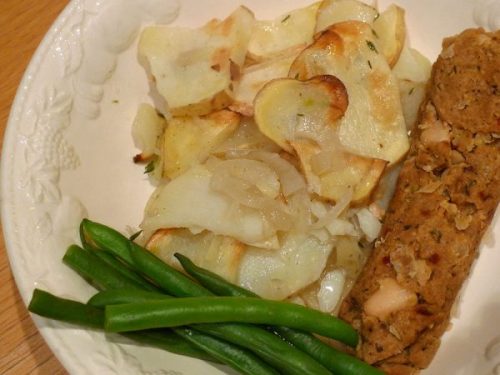 Increasing the spices is a bit of a thing for me. I made vegan doner using Mrs Vegan’s recipe. After a first attempt, I doubled all of the spices, halved the fat and steamed instead of simmering. It made flavourful, textured strips that meet all my doner cravings. (And I have those. More so since I first tried Henderson’s seitan doner a couple of summers ago.) Doner is about what comes with it as much as the slivers of ‘meat’ themselves. 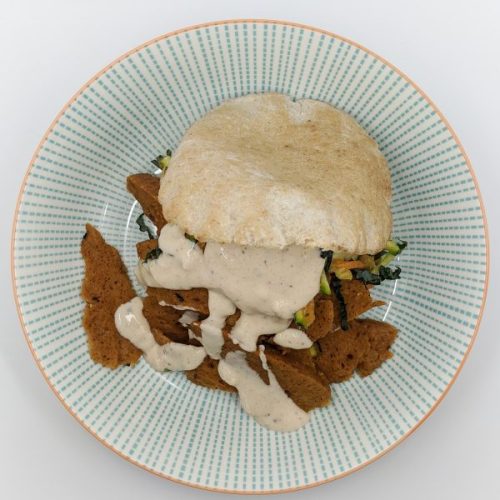 Having made seitan quite a few times, I’m now happy to freewheel. For one cup of vital gluten flour I use about 75 ml stock and 1/3 cup nutritional yeast. Spices go with the dry ingredients, tomato paste, miso, soya sauce go with the water. I like the mix to be loose enough to shape fairly easily. Grate the cooked seitan to make mince, or slice into steaks or chunks. This could work for sausages too. (Try Vegan Dad’s sausages first. The beans – top tip: use a full tin, use any beans you like – do great things for a really sausage-y texture.) 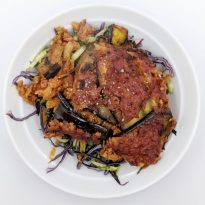 Save Print
Preparation time
15 mins
Cooking time
45 mins
Total time
1 hour
Making seitan doesn't have to be difficult. This recipe is a good starting place. Not all gluten flours are the same: a lower gluten percentage will give you a softer texture. Even with a recipe, you might need to experiment a little.
Author: Caroline von Schmalensee
Recipe type: Vegan
Cuisine: European
Serves: 4 portions
Ingredients
Instructions
3.5.3208
* An animal who can only thrive on meat.