Already a fan of Macsween’s haggis and veggie haggis, I was intrigued to try their new sausages. I wasn’t sure what to expect, but I secretly hoped for haggis in a sausage shape… 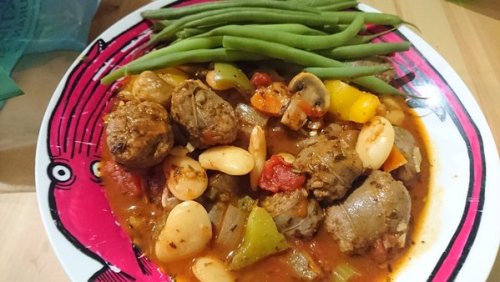 Of course, realistically that would just be haggis, wouldn’t it? In any case, we received three packs of sausages; pork and beer, pork and haggis and an unlabelled pack. I suspected it was beef, as the sausages were grey where the others were pink. In hindsight, I could easily have Googled the answer, or emailed the PR, but hey, I’ve never been one to do things by the rules. So what were these anonymous sausages? Stay tuned to find out.

All the sausages were thick, like a Cumberland, with a thin casing which wasn’t rubbery. They were firm and well seasoned, with pieces of fat but not gristle, and weren’t too salty, as is sometimes the case with commercially-made sausages.

The “beef” were my favourite, but regular dining pal Raymond preferred the pork and haggis. They were savoury and moreish with a well rounded flavour, as well as more attractive than the beer sausages. We enjoyed them with mash and cabbage, in a traditionally sausage-y way, which seemed to suit them. 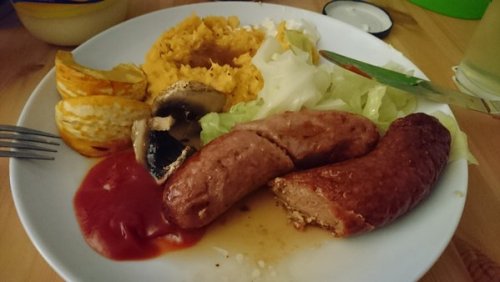 We agreed the beer infused ones were sweet and smoky, but one dimensional otherwise. (I’m not sure they contained haggis, which would have added some of Macsween’s excellent spicing.) We enjoyed them as hot dogs with caramelised onions and hot English mustard, which worked well. A classic.

The “beef” were darker and meatier, although less pretty. And, as it transpired, they were not beef per se, but black pudding and bacon. I still liked them the most, although I didn’t get a sense of the bacon.

We made the black pudding sausages into a boozy, herby casserole. You’ll find the recipe below. It’s great with a couple of fried eggs on top (runny yolks essential) or served with a warm garlic bread, to mop up the sauce. The sausages add a really meaty depth of flavour.

Overall, I found Macsween’s new sausages satisfying, albeit an unremarkable addition to the arena. However, they’re more than adept at filling a sausage role (or roll) and a reliable, tasty option when you’re after such a thing.

Try them for yourself