I have a love affair with Middle Eastern food, so it’s great to see the opening of another new eatery, Kukina, in my neck of the woods.  Its menu is packed full of fresh, organic Turkish street food and meze and is worth checking out. 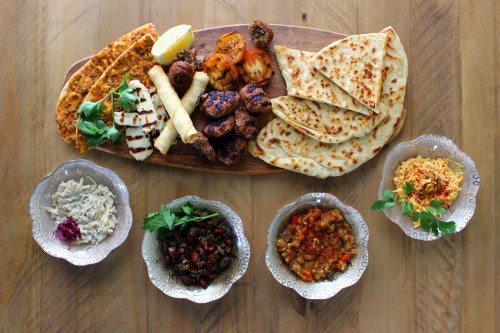 There was a warm welcome from restaurant manager, Verdun Strain, who with a name as exotic as that had me wondering what his origins were – but he hails from Almondvale, the mining village, as he describes it, in West Lothian.

Kukina occupies what was formerly a Polish supermarket, next door to Area C coffee-house.  It’s two owners, two Turks, own the popular cafe Artisan Coffee (that Verdun says serves coffee as good as you would find in Melbourne, Australia where he worked for a year) and the kebab shop, on Leith Walk.   The two owners, who were only recently acquainted, decided to use their common culture to open up this new venture.

Its space is deceivingly big and whilst there are still finishing touches to be added, is beautifully decorated, with trunk boxes, a bookcase displaying some really interesting reads, and a fake log burner, stacked with logs.   There’s a really nice vibe to Kukina and it was buzzing on the night of our visit, despite it being mid-week and very wet outside. Our large glass table in the area adorned with the afore mentioned bookcase, is nestled by a tan coloured leather Chesterfield sofa and two chairs, one of which I take, on the basis that the sofa is too low for me.   My only complaint is that this seating area is near the loos but as I have my back to the door, it doesn’t really upset me too much.

As they had only been open for less than a week, not everything was available on their menu, and disappointingly the cheese platter wasn’t to be had. Oh well, it’s an excuse to return.  So we started with some lamb gözleme. Ghillie Basan, a great friend and author of a new book Spirit and Spice, tells us that gözleme are Anatolian flat breads, often rolled out to the size of a bicycle wheel and cooked over the arched dome of an upside-down cauldron. They can be drizzled with honey and sprinkled with sugar or they can be filled with savoury ingredients like chopped spinach and onions, potatoes and spices, and cheese and herbs.

Kukina’s gözleme are freshly made by hand on the premises.  You must check out Kukina’s Facebook page to see what a labour of love it is. There’s a choice of Feta Cheese; Spinach and Feta; Potato; Beef and Onion; and Lahmacun (lamb).

We did a good job of trying all the options, with my favourite being the Lahmacun and the beef and onion.  They’re rather like chipatis or tortilla and work rather well to hold the variety of fillings.

We then went for the Kukina Classic, which is only available after 5pm. It’s a platter of Middle Eastern yummy-ness and includes: bazlama, another Turkish Flat bread; borek, a classic vegetarian dish of spinach and feta, wrapped in layers of filo pastry and shaped like a cigar; falafel; spicy sausage; lamb kofta; grilled halloumi with grilled tomatoes; stuffed vine leaves and bread. A Middle Eastern feast can be had at Kukina

We were also treated to some meze of tzatziki; beetroot with yoghurt; kidney beans and cucumber; peppers and aubergine, which were great for dipping the various breads into.

The dessert option is limited and consists of yet more gözleme, but this time with sweet filling and of course, baklava. I was gözleme’d out by this stage but my dining companions did a good job of working their way through a Nutella and banana filled one; and another creation made by our lovely Polish waiter of Nutella and coconut.  By the empty platter, I think they rather liked it.

We did score the last piece of baklava, and the one mouthful I managed to taste was sticky, moreish and left you wanting more. Baklava – but lose that fake cream

My only criticism would be too lose the fake cream, which is just plain wrong; and you can’t disguise this fact, even when its dressed up with a sprinkling of pistachio nuts.

I’d like to have seen some Turkish delight on the menu as that would have gone perfectly with my peppermint tea, served in a traditional copper, Turkish teapot. I think Kukina’s going to get a loyal local following, especially as it’s currently BYOB, although they are looking to get a licence at some point. I really hope they stock some Turkish wines as these will really complement the food.